Home Archives Profile Subscribe
At last: the Pitmen Poets singing The Workers’ Song. And how to resolve the winter of discontent
When the call of the black crow - and the clanging of Sunderland's shipyards - go still

On Sandy Denny’s birthday, we choose our favourite songs

Rolling Stone magazine, as I read online yesterday, places Sandy Denny 164th in its list of  200 “greatest singers of all time”.

If that seems insultingly low, as it initially did to me though it was hardly any surprise, imagine the competition. From the top three - Aretha Franklin - to Numbers 198 to 200, this necessarily subjective rating is brimming with outstanding vocal talent.

Maybe not a majority of them appealed that much to me. But for a folk or folk-rock singer to make the list at all was some achievement.

Then I noticed this morning that today, Jan 6 2023, would have been Sandy’s 76th birthday. As most will know, she died aged just 31 from a brain haemorrage, depriving a daughter, Georgia, of a mother and the world of a supremely gifted  songwriter with, as Judy Collins put it, the voice of an angel.

So I used social media - Twitter and relevant Facebook  groups to which I belong* - to seek the opinions of fans on the best of her songs and performances . 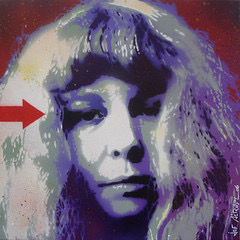 Jef Aerosol's image, much-used (with his consent) on these pages

This is how I introduced a wholly unscientific poll at my own Salut! Live Facebook group:

The wonder that was Sandy Denny would have been 76 today. A girl may like to dance on her birthday so I have chosen White Dress, written for her by David Swarbrick and invite members of the group, 45 years after Sandy’s cruelly early death, to post links to theirown favourites. To stir the imagination, let us rule out Who Knows Where the Time Goes? RIP

Put on a white dress,

If you'll take me,

I can tell you the response has been tremendous and ahows the sheer depth and varied richness of this woman’s art. At the last count, I had received nominations for about 30 different songs.

Nominations are still coming and I shall produce the resultss in due course.  For now, let me just say that two things. Not  everyone resisted the temptation to go for Who Knows Where the Time Goes? And the song with the largest number of votes, by a clear margin, is Banks of the Nile.

Watch this space. And RIP Sandy …

ps this was my own sneaky second nomination ...

* The groups include: Sandy Denny and Family, Fairporters, Uncharted Jukebox, 60s 70s Folk Music, I Love Folk Music, Sandy Denny Fan Club, Folk Music from Anywhere, Anytime, Dave Swarbrick and maybe more. Most of the Comments below were posted in response to my references at those groups. It is a fact of life that while this site attracts healthy numbers of visitors, few leave comments. On the other hand, comments flow freely when I post links at Facebook.

For me, my favorite changes daily, there is so many to choose from. Today, I'll go with "Next Time Around." I love Jackson C. Frank references and mysterious lyrics. #2 would be " Winter Winds."

I defy anyone to listen to "No End" without shedding a tear. Just Sandy at the piano, pure raw emotion. So vulnerable, it sums hope why I love her so much. Happy Birthday to my music weaver ❤

Seeing Sandy on London Weekend television( I was aged 9 !) singing White Dress I asked my mum to get me Rising for the Moon which she did ( my first Lp ) I have loved her work ever since ! that performance exists in part and can be found on Youtube.

An utterly forgettable and trite track -- doesn't hold up. The reason people love "Who Knows Where the Time Goes" is that it is a great song as well as a good performance. - Sharyn Dimmick

Example of how Fairport had turned into an east listening group. Not a patch on material from the late sixties. - Andrew Tunnicliffe

Not only a favorite by Sandy Denny, but maybe my favorite song ever. If I had to choose. Thankfully I don't. https://www.youtube.com/watch?v=1y0ZTnQ2voE

Friends. Great tune, acerbic lyrics but I've always liked it since I first heard it as the b-side of the Whispering Grass 7".

I had absolutely no idea, until it was mentioned in the excellent programme that accompanied Fairport's 50th anniversary tour, about this cover version.......
Although I think I understand where the hypothesis about the lack of recognition/commercial success of the UK 60s/70s folk-influenced music and artists is coming from (Linda Thompson: the only Pointer Sisters' single that didn't chart was our song etc) I reckon, on balance, it is nonsense. Check the chart placings for ISB, Pentangle, post-Hutchings Steeleye, Ralph McTell, Al Stewart etc, two Top of the Pops appearances for Fairport. Often thought this would be the basis of a great piece in Mojo/Uncut/Shindig (happy to be a critical reader/contribute if anyone wants to give it a go....)
I wonder if the proceeds of this was one or more of the royalty cheques that RT didn't bother to cash.........
I’m

This is the cover Chris Glenn mentions in the previous comment