Song and performance of the year: Pitmen Poets and Ed Pickford's Workers' Song

I do not always nominate a best-of- year album or other piece of work. This year, I feel bound to do so. I have heard nothing better all year than the Pitmen Poets' rousing and timely rendering of one of Ed Pickford's greatest songs.

Bravo Bob Fox, Benny Graham, Jez Lowe and Billy Mitchell ...but also those who know what ordinary people do and - as you see just from listening to the chorus of belittlement from ministers - how little they often seem to be appreciated

If you write for a living, you are often measured by what you did last.

Maybe I am at an age when I should be standing aside to let younger people jostle for my place. I am realistic and philosophical; each piece of mine that someone publishes may be the last anyone will ever want. But there still seems to be an appetite here and there for what I do, at its best ephemeral journalism. 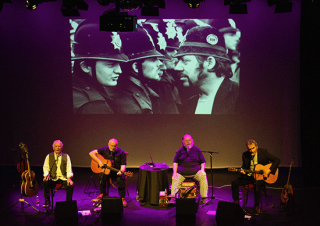 If judged on my most recently published work, I'd be proud. The National, a daily newspaper I helped to launch in Abu Dhabi back in 2008, allowed me to counter all the anti-nurses, anti-worker, anti-union drivel much of the media has subjected you to during the early period of Britain's winter of discontent. Read it here if you wish (there's an onward link to the paper's website).

As a singer-songwriter, Ed Pickford undoubtedly does it better. He has written some of the finest pro-worker songs the world has heard. My choice is a long way from being his most recent and I had all but forgotten it until it came to my attention again during this year.

Bob Fox sent me Bare Knuckle, the new CD by his occasional quartet, the Pitmen Poets. It is packed with songs of the highest quality, the delivery is stunning and I wrote about it here.

And the stand-out track for me, one I play over and again, is The Workers' Song.

What a powerful song it is, applicable to current events, when workers of all kinds - nurses, post office employees, ambulance crews, railmen and women, immigration officers, bus and tube staff ... the list goes on - are under concerted right wing attack for having the audacity to stand up for their rights, including the right to a decent level of pay.

I was not sure when Ed wrote the song. He thinks it was  in the mid-1970s and it is more that 40 years since Dick Gaughan included it on his album Handful of Earth, that title taken from the lyrics.

The central theme is of the working man as cannon fodder in wartime, but there are plenty of references to everyday travails that broaden the subject and fit the moment.

Its words are as relevant now as then. I could pick out any line or lines in the song as conveying his thoughts, but I choose the chorus contrasting the country's expectation of Tommy the Squaddie and his (also her of course) actual experience of life.

And when the sky darkens and the prospect is war

Who's given a gun and then pushed to the fore?

And expected to die for the land of his birth

When held never owned one handful of earth

Ed's late sister, Florence Anderson, a pillar of the Labour movement in their native Sunderland, liked the song, too, posting this at YouTube as a comment on the version by a Boston band, Dropkick Murphys ..

My brother, Ed. Pickford, wrote this song a long time ago, when the mines and shipyards were first threatened with closures. Although the D.K.M. are not my genre I now really like their version although I like the Dick Gaughan recording and love Steve Young's. Our father was a miner and we lived in a mining community in Co. Durham and this, obviously, influenced my brother's work. Of all the songs he has written this is my favourite.

Dropkick Murphys style themselves as an American Celtic punk group so the song is given a raucous treatment, not in itself a bad thing and reminiscent of North-eastern England's own Whisky Priests. It's a decent enough effort if not the version I'd naturally turn to.

So where would I turn?

To the Pitmen Poets if only I could. I had the track on in the car on a two-hour drive over the weekend and it gave me nearly three minutes of rousing bliss to make up a little for the wall-to-wall Christmas song dross.

But I cannot find it at YouTube or anywhere else I've looked. For the Pitmen Poets, then, we must settle for this tour promotional clip and its snatches of other bits of the album and hope that their insistence that this is was a farewell album and farewell round of gigs proves as premature as reports of Mark Twain's death.

That brings us back to Dick Gaughan. Dick played at a club I co-ran in Bishop Auckland over half a century ago. I happened to be on strike - yes, even journalists do it and our local papers were notoriously stingy - so heaven knows how we afforded to sink quite so much Federation Best with him at Old Shildon Workingmen's Club next  lunchtime. My dad was the club secretary but that didn't get me a discount.

Many will regard Dick's as the ultimate rendition. Im the absence of that new challenger, that elusive Pitmen Poets clip, I easily see why.

Then there are the Longest Johns, a Bristol quartet whose TikTok sea shanty clip went viral in 2021. Several fine versions. One I really enjoyed was live in the Cornish port of Falmouth; we can but hope the enthusiastic crowd response owed nothing to Cornish voters who cheerfully embraced Brexit and its predictable and predicted further impoverishment of ordinary people. I have chosen a studio option with a supporting cast that includes the acclaimed West Country singer-songwriter Seth Lakeman.

That leaves the late Steve Young whose clip was posted by Ed Pickford's sister (see her comment above) and starts with the prominent recognition of her brother that his inspirational song deserves.

Ed himself - the photograph below was taken by his daughter Sally) says "everyone does it better than me". But that is not true, as I know from the Facebook clip he sent me from an Albert Hall benefit for striking miners in the mid-1980s. If I find a way of posting it here, I shall do so. Don't hold your breath, though - it may defeat my technological skills. The Big Interview Part One: https://www.salutlive.com/2009/02/ed-pickford-the-big-interview.html

AND see the Salut! Live Series on Music from North-eastern England: It starts here: https://www.salutlive.com/2021/11/cover-story-52-fareweel-regality-the-unthanks-terry-conway-or-kathryn-tickell.html