Linda Thompson: giving that fabulous voice back to its owner

In praise of Linda Thompson. It'll take just a little while to get there unless you scroll down ...

One of the perks of working for the arts desks of the bigger newspapers was, in happier times for journalism, the chance to disappear on jollies, freebies, junkets - call them what you will but they were expense-free trips abroad when there was a record, film or other project someone wanted to promote.

I finally realised how drastically things had changed when a Sony press officer dismissed my request for an interview and/review ticket ahead of a Leonard Cohen concert in France: her response boiled down to "he doesn't do interviews and I can sell but not give you tickets". 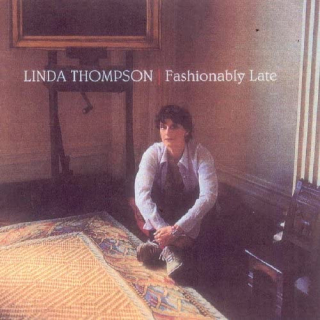 From the golden era of freeloading before that rebuff, I wrote about one such jaunt as The Daily Telegraph's folk bloke, which took me to a lovely Donegal spot chosen for the band Altan to herald the release of its first major-label album.

Unfortunately, the event coincided with a ceasefire-breaking IRA bombing in London and I had to revert to the less comfy day job involving news reporting and forays into Derry and Belfast. The occasion is described in my chapter of a book on reporting the Northern Ireland Troubles.

Another trip, more exotic, took me to Bahrain with Mary Black and her band. There wasn't really much more excuse than an interview (my resulting article from which never even appeared) and a gig in a cavernous hotel ballroom, with nurses, oil workers and other Irish expats gathering from around the Gulf for the occasion.

Over coffee with Mary's guitarist Declan Sinnott, conversation turned to the gorgeous Richard Thompson song Dimming of the Day. I mentioned how much I loved Mary's version and he corrected me: Linda Thompson's was better still, he said softly but with great conviction.

I'm still torn between the two but can see why he, and others, favour Linda's interpretation (she was, of course, married to the song's composer when they recorded it). And fair play, it is utterly sublime ...

Lately, it occurred to me that Linda's work was among much from folk and folk-rock that Salut! Live has somewhat neglected, a consequence of the site being an often time-consuming labour of love that doesn't always get the attention l'd like. She had done me a small favour, quickly and efficiently putting me in touch with someone I needed to contact.

There is an old Time magazine quote (Linda Thompson may be rock's best woman singer") that must these days leave her feeling nostalgia for the time before she was struck down with a rare vocal disorder, which she and I have described as a sort of musical equivalent of an actor's stage fright.

It was a temporary cure, enabling her to record the album Fashionably Late and sing live again, that led to our meeting in her London home for a warm, revealing interview in 2002.

I reproduced it at this Salut! Live item after I'd chosen Dimming of the Day in a Song of the Day series and, without uncharacteristic modesty, commend it as a decent read. I also loved the fact that after the interview, I was able to conjure a sort of "I'm your fan too" exchange between Linda and Tony Benn, a politician we both quite admired.

But let me also inject a couple of other examples from Linda Thompson's wonderful career.

The opening and, for me, best track on Fashionably Late was Dear Mary, a compelling slice of Americana. Everything about this album captures what I so admire in Linda Thompson, the mix of assertiveness and fragility, the tenderness and drive. And wonderful to see the extensive and impressive credits include not only her son Teddy (who co-wrote Dear Mary) and daughter Kamila but the old rascal genius who broke her heart, Richard Thompson.

Finally, let's go back to earlier days. With Richard, Linda has clocked up 735,000 YouTube viewers of this clip. It's what comes top if you filter a Linda Thompson search by "view count", though there is another LT you need to wade through first to reach it.

There we have it. Just a snapshot of the artist who has produced great singing and who obviously has a great heart. I cannot think of Linda Thompson without remembering how much honesty and decency she showed in that interview.

And I hope anyone reading this, enjoying the clips and warming as I do to an exceptional artist will now take the time to explore further. You will be rewarded for the effort.

But I'll leave you with this delicious anecdote, which she shared after the death of Peter O'Toole, a brilliant actor who was represented by Linda's agent husband, Steve Kenis.

My fondest memory is when we were both in the South of France, sitting in the foyer of the Negresco Hotel. I was reading Remembrance of Things Past he was reading Mein Kampf

"How are you getting on with Proust darling?" said Peter. "Awful," I said. He told me his book was unreadable. We walked down to the beach, and threw both our books in the sea! He was so very clever and talented, and difficult!

I’m pleased to say this item has been seen by many hundreds of people from around the world. Some have left very kind messages about it, not here - where readers’ comments are relatively rare - but at the various Facebook groups where I’ve posted a link. I shall reproduce some of those comments below.
Ps Linda has also seen it. I hope my words and those of others have made her smile

I bonded with a London Bobby in 1976 while in gaol (on a charge of drunk and disorderly) over our mutual love of Richard and Linda Thompson.

Of course, she is absolutely devastating at her best. And I mean that in a good way.

My all time favourite singer.

Excellent article on a fabulous singet. You should also check out "I live not where I love" festuring the "other" Fairport guitarist - Simon Nichol. I'm not sure what album it's from as I first came across it on a compilation of women folk singers. It is on YouTube - https://youtube.com/watch?v=myOXFO1QLRA&feature=shares

Linda is absolutely my favourite all time singer. I still, at the grand age of 66, regularly listen to the magic on those albums. The remain a great source of comfort and hope.

Oh Linda, this is beautiful, and so right and just - you are such a spectacular singer - beyond incredible. Your voice is mesmerizing, celestial, and so filled with passion and beautiful. 🌹

Funny, I was just remembering your book story today too when a fb memory popped up about Peter O'Toole. And the author is right you know, you are always the best. Your singing, your humour and your truth.

A wonderful person as well as iconic singer