Colin Randall writes: into my e-mail inbox popped a seasonal offering from the Albion Band, one of the most important evolving musical projects from decades of British folk and folk-rock.

I am not the world's greatest fan of Christmas songs, folk or pop or any other genre. But there are honourable exceptions and this - titled All Are Safely Gathered In by the Albion Christmas Band - is one of them. It is, as we have come to expect from any Ashley Hutchings venture, an album full of substance and style. This one assembles interesting songs of the season old and new, pleasing arrangements and musicianship and singing of the highest order.

The band comprises of Simon Nicol (Fairport Convention co-founder) and Kellie While on acoustic guitar and vocals;  Simon Care on melodeons and Hutchings (driving force behind Fairport, Albion and Steeleye) on bass guitar and vocals. They are joined on several tracks by special guests: Blair Dunlop (vocals, acoustic and electric guitars), Ruth Angell (violin) and Holly Brandon (fiddle). The album can be ordered at https://talkingelephant.co.uk/product/all-are-safely-
gathered-in/ 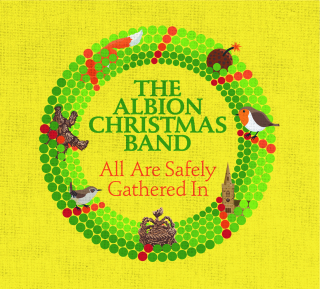 The worst thing about Christmas is that if the carols don’t get you, the Christmas standards will, whether these come from the ranks of the tinsel-wrapped edition of the Great American Songbook or are pop’s Christmas number ones. There are weeks before the holiday when it is unsafe to go into cafes or shops.

But there are chunks of the folk tradition that take you past these industrial expressions of Christmas -which are mostly from the 19th and 20th centuries - to an older winter world.

There are three kinds of songs that fit into this. The first is the seasonal songs that are about the coldest time of the year, with very little to do with the religious aspects of the holiday. Then there are the carols and associated songs that predate the sentimental and pious Victorian carols.

And then there are the modern songs that try to capture the mixed feelings about this time of the year.

The word “wassail” crops up a lot in those seasonal songs that are indifferent to to the Christian aspects of the deep midwinter. Wassail is an archaic English word meaning “spiced ale or mulled wine drunk during celebrations for Twelfth Night and Christmas Eve”. Wassailing is the verb for doing this.

The most famous of these is also a folk classic. The Watersons’ Frost and Fire strays a little from the season, and the fact that it is all a capella can put listeners off, but this is a phenomenal record. It takes you straight into the cold, and the class relations, of the feudal English winter.

John Kirkpatrick has also done good work resurrecting songs from this tradition. Wassail!, made with a group of folk musicians, is “a traditional celebration of an English midwinter. His 2006 record Carolling and Crumpets tells the story of these pre-industrial Christmases, mixing some original songs with some old ones, and he still tours a seasonal solo show based on the record.

The second sub-genre here is the pre-19th century carol. I’m thinking of songs like The Coventry Carol, Lullay Lullay, and I Saw Three Ships, whose roots go back to the Middle Ages.

One of my favourites of these is The Cherry Tree Carol, which I like because it opens up the possibility that Joseph might not be completely persuaded by the story of the virign birth:

"Let the father of thy baby

There is a fine version of this by Pentangle:

In the same vein, and about the same age, is Gaudete, an unlikely hit for Steeleye Span:

The third group is songs that seem broadly to have mixed feelings about the season, for whatever reason. We hope it will be better, but we know it might not be. Or even if it is better for us, there are others for whom it is not. Most of these are modern, and written rather than traditional, but the genre goes back a bit.

The Snows They Melt The Soonest, for example, dates at least to the early part of the 19th century, and has been widely covered.

A modern equivalent might be Joni Mitchell’s River, also widely covered, although I’m not sure that is a folk song. Or, from the North East of England, Alan Hull’s Winter Song:

There are some bands that have made a living from these songs. The Albion Band has a spin-off, the Albion Christmas Band, that has made a succession of seasonal records, drawing from all parts of the Christmas canon. They do an annual Christmas show as well.

This is from the 2022 edition ... Lady Maisery, similarly, have built a show round the songs and stories of the season, working with Jimmy Aldridge and Sid Goldsmith.

And Kate Rusby deserves mention here. She has made three different seasonal records, which contain examples of all of these types of songs, as well as a couple of ‘Dear Santa’ songs, one a cover of ‘Hippo for Christmas’, the other more modestly asking Santa for a banjo. To her credit, even the Christmas standards on here come with interesting arrangements.

If you do want your folk versions of the carols and standards, there are a couple of places to go. The Scottish musician Phil Cunningham also does a seasonal show (this year’s run has just closed in Edinburgh), and the record from this has Karen Matheson and Eddi Reader on vocals, among others. Mary Hopkin (that Mary Hopkin) also has a recent recordthat includes some Welsh language carols.

Honourable mentions in this department also go to Bella Hardy, O’Hooley and Tidow, and the Clancy Brothers.

The modern Christmas record that I like the most, and this was a surprise to me, is Strange Communion, by Thea Gilmore. It’s a mix of her songs and well-judged covers. It’s not a concept album but it is themed around this time of the year, and has a dark edge to it. Some of the titles suggest the tone: Sol Invictus; Drunken Angel; Cold Coming; St Stephen’s Day Murders. The arrangements are good, and the lyrics have some depth to them.

This record seems not to be regarded as a seasonal classic, but I think it ought to be. I’m not alone here: a review on the For Folk’s Sake blog said it was “as rich and emotive a Yuletide listening experience as you are ever likely to get”:

Season’s greetings to all, no matter how you prefer your seasonal songs.

I despise almost all Christmas music. But this gives me an opportunity to once again post a version of "Little Drummer Boy," recorded at a club in Toronto almost 12 years ago to the day, that still blows me away. It's short, intense... epic.
https://www.youtube.com/watch?v=pYR2cfuXHgM