This website, or rather its grumpy old owner, has a chequered history when it comes to Fleetwood Mac.

I absolutely loved them in their  original incarnation as a British blues band.

Albatross was a departure of sorts but such a good instrumental that I didn’t mind.

I liked them a lot less, and sometimes not at all, after they decamped to the USA and embraced what reactionaries like me look down on as corporate pop.

All the same, I continued to admire ChristineMcVie, who has just died after a short illness at the age of 79.

That respect and affection dated from her time with Chicken Shack and, in particular, her sensational 1969 interpretation of I'd Rather Go Blind, originally recorded  two years earlier by Etta James. 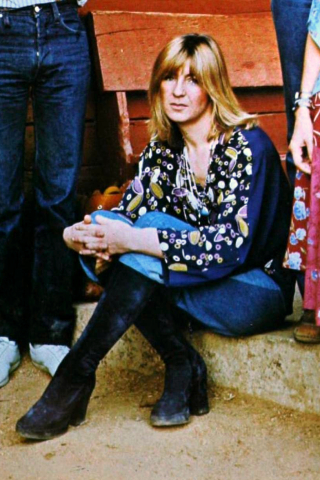 McVie was born perfect, or rather Christine Perfect, in Bouth, historically a village in Lancashire but these days officially part of Cumbria, the daughter of a concert violinist and a faith healer.

After Chicken Shack, she married the bassist John McVie, (the M(a)c part of his name, combining with Mick Fleetwood's surname to come up with Fleetwood Mac), and then joined the group in 1970. The band had been formed by the  great, if also highly eccentric and now deceased, guitarist Peter Green, who recruited her as a session pianist for an early album.

She was wholly committed to the mid-1970s change of direction that brought such massive success. One of my daughters adores them to this day - she was at the London O2 in 2014 when McVie has just rejoined the group after  a long absence - and naturally mocks my snooty insistence that it was all downhill from about 1974.

To the very limited extent that I ever listened with pleasure to the very different sound that developed, the singing, keyboard and writing of McVie - she kept the surname even though she and John divorced in 1976 - were important reasons.

She was honoured for her work, inducted into the Rock and Roll Hall of Fame in 1998 and later receiving  the Brit Award for Outstanding Contribution to Music. And there was a fascinating recent documentary in which she featured.

Proper obituaries will be appearing in the media. I haven’t the knowledge to match them.

Richard Wootton, a music publicist I know, like and respect, put it well: ´´This is awfully sad news.  One of the greatest UK singers and songwriters has passed.´´

At the excellent Uncharted Jukebox Facebook group, Eric Jeffrey put it even better: ‘´ I still  think of her as Christine Perfect.’´

Seen all the incarnations of FW and sure I saw her with Chicken Shack at Spennymoor Variety Club. Gutted at her passing - but rock chicks live forever.

Via Twitter
I saw Christine Perfect at The Bay Hotel in Sunderland when she was with Chicken Shack. The band set up on the dance floor, not the stage. When Christine wasn't on keyboards she walked among the crowd with the microphone. This was back in the 1960's. Incredible talent.k