Home Archives Profile Subscribe
Cover Story: (55) The Parting Glass by Wisconsin women, Voice Squad, Glen Hansard - plus Dylan and Bill Jones approximately
At last: the Pitmen Poets singing The Workers’ Song. And how to resolve the winter of discontent

For Christmas present, greetings from Salut! Live and a tracklist without hits

Salut! Live wishes as a happy Christmas and prosperous a new year as our masters will allow.

It's been a strange year for this site, exhilaration at some astonishing statistics recording many hundreds and sometimes even thousands of daily visitors giving way to the glum realisation that the vast majority were not human beings but Google bots.

I still don't really know what bots or "web crawlers" are and whether their invasion is good, bad or indifferent for the health of Salut! Live.

But I do know that if you are real, you will have come to the site expecting to hear music. This is intended as a form of relief from the relentless stream of Christmas pop or the simple discovery of new, unusual or rarely heard sounds. 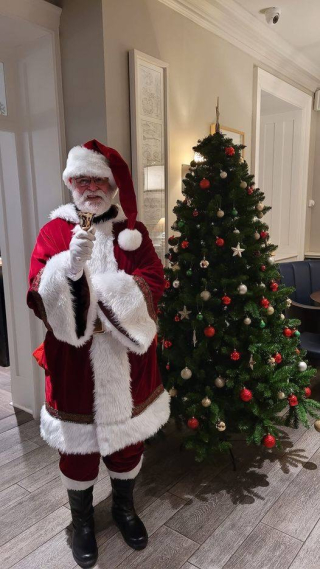 When I wrote recently (at this link) that I was not the world's greatest fan of Christmas music, my Bah Humbug pretensions were trumped by my friend Bill Taylor, who posted at the Salut! Live Facebook group: "I despise almost all Christmas music."

But even Bill makes exceptions. He seized the opportunity once again to post a liking for the craziest version of Little Drummer Boy you are likely to encounter. It is by a Canadian band, Rural Alberta Advantage, and was recorded at a club in Toronto 12 years ago. "it still blows me away," said Bill. "... short, intense... epic."

This is how, five years ago in our Cover Story series, Bill described the song and its various versions from the Harry Simeone Chorale and Beverley Sisters to Bing Crosby ans David Bowie

"I wish I’d been a part of the boisterous crowd that night," Bill wrote in 2017.  "A lot of people I know hate this version, won’t even acknowledge it as music. That’s their problem. Turn to Psalm 100 in the Bible and you’ll read, “Make a joyful noise unto the Lord.” I don’t know who The Rural Alberta Advantage intended it to be unto but, for me, this is the most joyful noise of the year."

Katherine Priddy's music is a different kettle of fish. Again in Facebook, at the 60s 70s Folk Music Group, my electronic buddy  Steve Peck alerted me (and everyone else at the group) to her wistful Christmas song of love and separation, Still Winter, Still Waiting.

Katherine released it as a single in 2019. For Steve, it is "one of the prettiest winter songs, written and performed recently .. Katherine Priddy's amazing musical gifts keep giving all year round".  And someone at YouTube added: "English rose with a voice to match". I am inclined to agree with both of them. Check out the singer's own site at http://www.katherinepriddy.co.uk

Now for something completely different. My great pal Pete Sixsmith makes an unbeatable Santa each year, turning it into a post-teaching professional outlet that probably pays for his Sunderland AFC and Durham County Cricket Club season tickets, and a bit more besides.

Pete cast a spell on me when he insisted I look up Bob Dylan’s Must Be Santa. As a wrote at https://www.salutlive.com/2020/12/cover-story-32-revisited-fairytale-of-new-york.html , I had the wretched thing stuck in my head for ages after that belated introduction two Christmases ago.

"I cannot get it out of my mind. probably never will," I said. "It is emphatically not Dylan at his finest and it is not a song of any evident high quality. But it's joyous and it's there, stuck in my consciousness. "

That 2020 post also referred to the eccentrically compelling version of Fairytale of New York as recorded by the English/Irish female duo O'Hooley and Tidow.

I still love it though cannot match the eloquence of my journalistic confrere Gervase Webb, who had this to say:

I always thought nothing could match the original 'Fairytale…' with Kirstie's wonderful sweet to McGowan's sour, but that blew me away. Turning nihilism into affirmation just by playing with the notes.And, on a side note, isn't it amazing how promo material for artists has developed. Long gone are the days of the gestetner, the cheap photocopy and the linocut; all stapled to boards, doors and anything that would stick! That wor proper class.

Love or hate them, these are Salut! Live's Christmas offerings. Feel free to add you own choices, the quirkier the better, in Comments below.