I've been meaning to post something about Lindisfarne for some time. They've had mentions, for sure, but their achievements deserve more.
My first encounter with this brilliant Newcastle band was, appropriately since my childhood beat was County Durham and my lifelong football allegiance belongs on the bright side of the Wear-Tyne divide, a concert in Sunderland. It was long time ago and it seems almost beyond belief that they were the support act for anyone. But so it was: Ralph McTell was the evening's star. He had to be very good indeed to avoid being upstaged by the magnificent first half played by Lindisfarne - and, I'm pleased to report half a century or more later, he was.
The folk club I helped to run in Bishop Auckland was later the setting for a tremendous solo performance by Alan Hull, a founder member of the band and writer of many of their classic songs. Alan became seriously active in the Labour party, serving as a Tyneside constituency secretary and playing a string of benefit concerts for striking or redundant workers. Sadly, he died in 1995 - cruelly young at 50 - after collapsing at home with a coronary thrombosis.
My friend Malcolm Dawson posted this welcome little review at the Salut! Live Facebook Group - please visit and join! - after seeing two Lindisfarne veterans at a gig in Barnard Castle, the charming Co Durham town given a curious new claim to fame when Dominic Cummings, a political strategist with as bizarre a relationship with the truth as his then boss Boris Johnson, kept a straight face while insisting that a lockdown-busting drive there was a legitimate journey for the purposes of testing his eyesight, after his own bout of Covid, before heading back to London.
Needless to say, on the day our Dom sat in the garden at 10 Downing Street and came up with that porky, pigs were seen flying breezily through Whitehall. Worth remembering, however, that those airborne pigs had already been busy since Dom's economy of truth helped to inflict Brexit on us ... 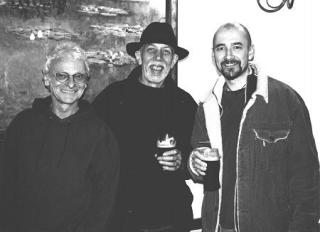 Canny snap of the 'acoustic Lindisfarne', reproduced from folkimages.com with the consent of Roger Liptrop
Over to Malcolm:
Went to two fantastic gigs last week at the Witham in Barnard Castle.
First was Ray Laidlaw and Billy Mitchell with their stories of the early days of Lindisfarne and celebrating 50 years (now 51) of Fog on the Tyne, and their two-man performance of the songs on the album, plus a few others.
You can have a good go at working out my age if I tell you that as a student at the Tech College, I remember going into Peterlee town centre in my dinner break (we didn't know what lunch was back then) and buying the album the week it came out from a newsagent's that had a rack of records down one wall.
I recall examining the cover every word written on it while going back to Hetton on the bus and then hearing it for the first time on our stereogram! I still listen to it on vinyl and I'm still word perfect on every track!
The second gig on Saturday evening was the Tom McConville band led by the Newcastle fiddle player that Seth Lakeman rates as his biggest influence. Also in the band was acoustic bass guitar player Phil Murray, who was one of the founder members of Jack the Lad with Ray Laidlaw and Billy Mitchell.
But what struck me about both evenings was that I must have been one of the younger members of the audience. Not the youngest but there weren't many there under the age of 60.
There are plenty of really talented and really young folk musicians out there and maybe the festival atmosphere appeals. Or maybe it's just the venues I go to. But I do wonder if in 50 years time there will be 70 year olds going along to gangsta rap revivals!
***
Thanks, Malcolm.
The Salut! Live Facebook group has relatively few members - 192 last time I looked - but a healthy number of them have seen Malcolm's post there and at various other groups where I shared it (60s 70s Folk Music, Uncharted Jukebox, North East Bands 1970-1989 and Lindisfarne Gigs).
Yes, Lindisfarne Gigs: I mistakenly used the past tense when saying what a joy it was to hear them on record or see them live. "I'll be seeing them tonight in Northampton," wrote Steve Vincent at the NE Bands group.
Malcolm's words prompted another member of that group, Malkie Bass, to offer his own recollections from long ago:

Think it was in '69/70 went as usual to the golden slipper club or as we used to call it the yella Welly in South Shields or as we used to say sheels inside on the stage was two stacks of 4*4speaker cabinets first thought was gan a get blown away but on came those 5 lads acoustic, melodic &amazing still two of my favourite songs today lady Eleanor &winters song saw them a few times at the Christmas gigs city hall in Newcastle,the last time I saw Alan Hull he was doing a gig on his own in the "new crown " pub in South Shields on a wet and windy Wednesday night maybe about twenty people in ...had a chat about one of the songs he did ,lovely man....
Let's close with two clips, neither on this occasion being the anthemic rags-and-reminders hit, Meet Me on The Corner

The first is a live performance of one of Alan Hull's many excellent songs, All Fall Down, in which he tears into the corporate, municipal and government vandals who lay waste to towns and nature:

And the second, originally featured here in our series on the Music of the North East, recalls a spontaneous rendering in New York of all places of the song, adapted from the Tyneside favourite Cushie Butterfield famous TV ad for Newcastle Brown Ale...

I've said it before: the ad was better than the beer.

** One footnote, following on from Malcolm Dawson's observations on the age profile of the audiences he joined.
Sid Young, at the NE Bands group, chipped in with this:

I go to a music venue where the owner is a couple of years younger than me (60) and most of the clientele are 50-70. The music is usually rock, blues, and punk but the last bands I saw there were more prog/metal and the audience was noticeably younger and a higher percentage of females. I was at a 90s party on Friday and there were loads of 20-somethings. I guess you can't second-guess who will be listening to what music in years to come.