Ain’t Nothing But … a great British blues bar

To reach the little music venue I love most of all from, say, Piccadilly Circus, there’s a choice to be made.

It’s a short walk but this part of central London is invariably busy. Accept that reality and just weave a way through the crowds clogging either Regent Street or - still a powerful magnet 60 years after the Swinging Sixties - Carnaby Street.

The minor effort is worthwhile.  Tucked away in Kingly Street, just behind the famous Hamley’s toy store, Ain’t Nothing But … is a great blues bar. 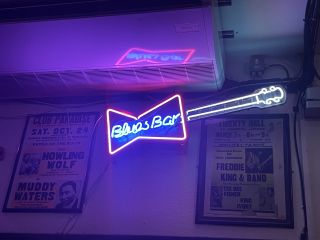 Think of it as a welcoming oasis from the grim reality of Brexit Britain, the social and economic consequences of that expression of the "will the people" making ever more toxic the poisonous fruits of a government that is as incompetent as it is morally squalid.

You go to Ain’t Nothing to forget all that, to enjoy the simple musical pleasures it offers. I’ve never seen a bad session there and I’ve been present for plenty of very good ones.

The London blues duo Jackson and Morgan figure among the best. Lovely old git blues which I hope this snatch from their set demonstrates.

We shared our table - seating is very limited - with two friendly Norwegian brothers, just visiting London. One, an Aston Villa supporter, was said by his Ipswich-favouring sibling (the allegiance formed in boyhood when the Tractor Boys briefly figured among the elite in English football) to be a connoisseur of the blues. Happily, he approved our verdict.

I've seen online complaints about the price of drinks. A modest entrance fee applies in mid-evening but it's a fantastic way of hearing live music for free or that small fee.

In late afternoon, we paid about £28 for drinks - two glasses of beer, two large ones of red wine - plus crisps and enjoyed an hour and a half of cracking  music. What more do people want?

This was our first visit after lockdowns. It won't be the last. 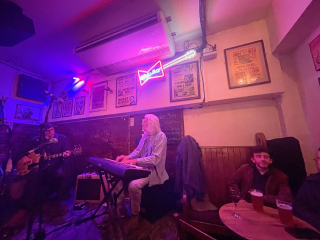