Home Archives Profile Subscribe
Sorrow and solidarity in the coalfield, with Bob Fox, Benny Graham, Jez Lowe and Billy Mitchell
Inverness and its Dandelion: no burdock but a world of fizzy festival music

Steeleye Span and royalty or wrens: ‘our king is well dressed’

No, I am not a royalist. Yes, I admired the Queen and respect the feelings of all those who turned out for the funeral or watched on TV.

But since we're here, how about a song about royalty that I actually love. Steeleye Span’s  The King appeared on the stunningly good 1971 album Please to See the King. 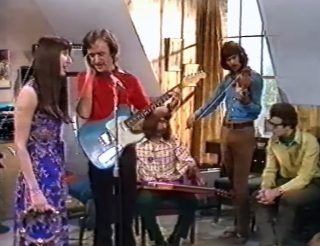 This gem of a still found here

I know little of the origins of the song itself.

Martin Carthy, describing it in this priceless clip from all those years ago, talks of Welsh, 12th night origins, a song children would use to bring people and maybe gifts to the doors outside which they sang it.

A modern version would doubtless have reference to a new king throwing a tantrum over a leaky ink pen.

The clip is from a much longer video which I fully intend to watch in full.

Here is how Tim Vickerstaff introduces it at YouTube.The techie stuff sails over my head but may mean something to others:

'This has been a fun little restoration project. My friend and music journalist Simon Jones handed me an old VHS tape recently. On it he tells me, "is the holy grail for Steeleye Span fans. A very rare recording of a TV appearance they made in 1970." His request was simple, "could you copy the programme from the tape?" The transfer process was simple enough, if a little convoluted. I still have a couple of fully functioning JVC S-VHS decks, so that helped a whole lot! The one I plumped for is a HR-S8700EK. A S-VHS deck with a built in digital time base corrector, which I would use to stabilise the video image. The audio and video outputs from this were hooked up to a Pioneer DVR-720H DVD/Hard Disk recorder and the programme was recorded digitally. Normally I would capture the tape directly to my PC with a Terratec Firewire capture card but in this case there was some tape deterioration and the resultant picture disturbance upset the capture card and interrupted the capture. The Pioneer unit was far more tolerant to the signal and recorded it cleanly. The disk recording was burned to a DVD which was transferred to my editing PC. Here it was upscaled to 1080p, pillar-boxed and set in a 16:9 frame to look better on modern widescreen monitors and colour corrected, just a tad. The Music Room programme has the ATV ident and countdown clock at the beginning so its likely the recording came from ATV themselves, perhaps as someone's archive copy. If anyone has details on that please let me know. Anyway. Here it is! I hope you enjoy this little piece of Steeleye Span history'

But to spoil the topicality of this article, I’ve been reminded that the song is actually about a wren, not a king!