Inverness and its Dandelion: no burdock but a world of fizzy festival music

Salut! Live has been away and there's a lot to catch up on. Andrew Curry, a valued occasional contributor, has also been away, taking in a vibrant festival in Inverness ... mention of Dandelion sent me decades back to childhood and not the flower but, irrelevant to what you're about to read, a carbonated soft drink we used to regard as a real treat, Dandelion & Burdock ... 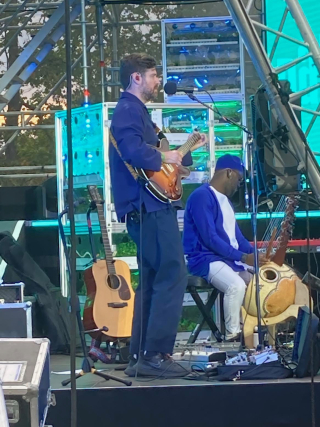 Kris Drever and Seckou Keita during the Spell Songs set

It takes a certain amount of optimism to run an open air festival in Inverness at the beginning of September.

Dandelion is part of the six month Unboxed series of events across the UK, and is described as a festival of “not just food but ideas, music, knowledge and community”. The three day event in Inverness’s Northern Meeting Park was one of a pair of free weekend festivals—the other was held in June in Glasgow.

The optimism just about paid off. The weather was dry and warm enough for the first two days, though there were spots of rain on Sunday.

Over the three days, the line up included Del Amitri, King Creosote, Spell Songs, Siobhan Miller and Sona Jobarteh, among others.

I only managed to get to the second half of the Saturday session, and a bit of Sunday—I was travelling through—but the line up for the time I was there included the Siobhan Miller Band, Spell Songs, and Kefaya and Elaha Soroor.

Spell Songs is not so much a folk supergroup as a super-project. It’s a collaboration with the writer Robert Macfarlane and illustrator Jackie Morris around their The Lost Words books, and it has produced two outstanding records.

The musicians include—among others—Kris Drever (playing bass), the harp player Rachel Newton, Julie Fowlis, who shimmered on the night in a sparkly waistcoat, and the kora player Seckou Keita. (Karine Polwart is also a member of the project but was absent through illness).

They played songs from both records, and the quality shone through. There were three particular highlights for me.
Jay, led by Seckou Keita, combines African rhythms and call and response with Scottish voices and harmonies. Selkie-boy, sung by Julie Fowlis, was prefaced by an a capella song about a seal, in her native Gaelic, which was also a reminder that she has one of the truly great folk voices. And their final number, after an audible discussion between the band about how much they could fit in before they ran out of time ("we’ve got eight minutes’) was the towering final track, The Lost Words Blessing, from that first Spell Songs record. 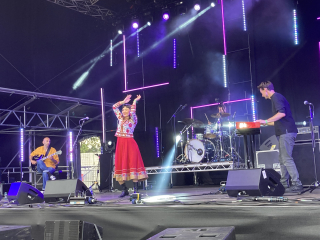 Kefaya and Elaha Soroor are a combination of Afghan singer and backing trio of a London-based jazz musicians. They play electric versions of Afghan songs, sung by Elaha Soroor. I’d seen them at WOMAD, where they got a bit lost because of the size of the stage and a muddy sound mix. Here, in a smaller space, their sound was sharper. The trio is technically accomplished, and she has a fine voice and a charismatic stage presence. The set faltered when Soroor was off-stage. The last song, described as ”psychedelic rock from Afghanistan in the 60s”, played to everyone’s strengths. 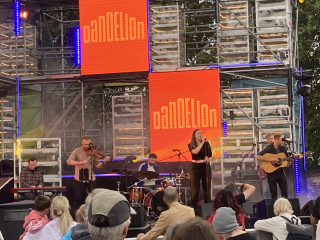 Despite the strength of the Spellsongs' set, the revelation here was the Siobhan Miller Band. She’s regarded as a traditional singer, for which she has been garlanded with awards, but listening to her and the band here this was a big sound—and an electric sound. The line-up behind her included guitar, bass, drums, keyboards and fiddle. It filled the space, and was a contrast to the mostly acoustic sound on her records.

But most of her songs here were versions of other people’s songs which she makes her own. What You Do With What You’ve Got, written by the radical American songwriter Si Kahn, and learned from Dick Gaughan, has never sounded more Scottish.

She sang A Pound A Week Rise by Sunderland and Co Durham’s Ed Pickford, written in the 1960s, with a topical urgency. (Ed spoke at length to Salut! Live’s Colin Randall a few years ago and the three-part interview can be seen here).

There was an energetic version of Rab Noakes’s Open All Night about a Scot working away from home in England, and she closed her set with Silly Wizard’s widely covered Rambling Rover, which certainly got people to their feet.

Listening to her set, I wondered if she and her band might be the next break-out folk act. These are strong songs with good arrangements, and she has the voice to carry them off.

Of course, one of the benefits of a free festival is that people can come and go. There were kids playing football on the grass, and other activities, some food-related in keeping with Dandelion. And I suspect that the crowd who were there for the New Orleans hip-hop-meets-the-second-line group Tank and the Bangas, who closed the Saturday night line up, was a bit different from our afternoon folk audience. 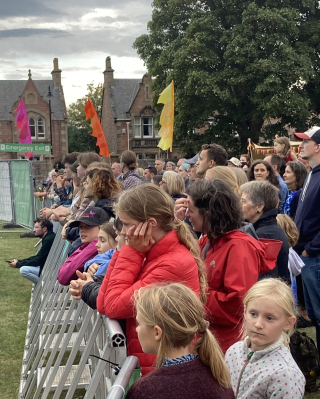 The front of the crowd for Spell Songs