Sorrow and solidarity in the coalfield, with Bob Fox, Benny Graham, Jez Lowe and Billy Mitchell

Jagged forks of lightning tore across the sky above Marseille as I began a two-hour drive home from the airport, listening to the opening tracks of Bare Knuckle, a copy of which had been waiting for me on a fleeting return to the UK. The CD remained in place for the entire drive and had reached a third playing, with lots of repeats along the away, before the journey was complete.

If the night sky was a reminder of the power of nature, music in the car bore witness to the potency of poetry and song when used to articulate the experiences of ordinary people.

Bare Knuckle is a masterpiece of acoustic music, four outstanding musicians describing the humour and misery, defiance and mistreatment, common to those experiences. Coalminers in North-eastern  England, their families and communities provide the primary subject matter but many of these songs can and do readily apply to other groups of people and other locations. 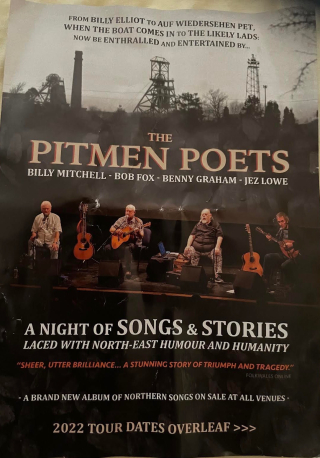 I am familiar with the work of all four performers - Billy Mitchell, Jez Lowe, Benny Graham and Bob Fox,  individually and collectively responsible for a large body of superior music stretching back decades.

There are traces of the humour that lifts the concert version of the album - see this Pitmen Poets link for details - and  simple but sublime musical accompaniment throughout. I marvelled at the quality and passion of four strong voices.

At a time when the forces of the right are ranged against working people, making a mockery of the squalid promises from Brexiters and Tories that seduced gullible Red Wallers who traditionally voted Labour, Bare Knuckle is a resounding triumph for values of decency, unity and purpose.

There is so much that is good on the album that I am reluctant to pick out standout tracks. I will do so all the same. Pickford's The Worker's Song, the late Alan Hull's Marshal Riley's Army are sheer joy and I deeply admire Fox's trademark vocal warmth and faultless timing on Byker Hill, Lowe's wry lyricism (The Checkout Queue and the title track) and Knopfler's fond story of the British expats who established the Mason-Dixon line separating the northern and southern segments of the USA eastern seaboard.

Only two minor quarrels: a couple of small theatrical tricks will, I am sure, work better live than on record and Bob Fox needs only to read recent items here on Bells of Rhymney to realise that making Rhymney sound Rimney not Rumni is as jarring to Welsh ears as north-easterners find London broadcasters' insistence that our region contains such places as Toe Law and B'nard Castle.

But that’s as minor as quarrels get.

This is a fabulous album, thought-provoking, musically rewarding and socially necessary. Like many of my age, I've moved on from the North East and experienced radically different lifestyles than I knew growing up in Shildon, Co Durham. I've lived in Hobson, Darlo, Newton Aycliffe, Harrow, Rayners Lane, Bristol, Ealing, Paris, Le Lavandou, and Abu Dhabi. I get back mainly for football (Sunderland) though I also try when there to see my sister Sandra and her family (Boro) and should try harder to see my cousin David and his (Whitley Bay).

My dad was a Cockney - he moved us north when I was a few months' old - and my appreciation of this kind of music derives in part from my admiration for the life be built as a Daily Herald-reading stalwart of workingmen's clubs, the local amateur football team and Labour politics.

Remember these magnificent lines from Ed Pickford the next time you stumble innocently across the Mail, finish the Brexiter-friendly hardest-rated Sudoku in two minutes* and then see the angry columnists accusing underpaid strikers of being greedy and led by dangerously left wing unions. They tell of the ultimate sacrifice working people are made to face when wartime military service interrupts life on the breadline:

* With apologies to Messrs Ed Pickford and Mick Lynch

When I've been in the U.S. deep south, where "I wish I was in Dixie" is a sacred song and Dixieland jazz a seminal development in music, I've always loved pointing out (and proving) that the name comes from Jeremiah Dixon who, with Charles Mason, surveyed the Mason-Dixon line which came to be seen as separating North from South. Dixon was born in Cockfield, near Bishop Auckland, and educated at B'nard Castle (that and Toe Law stand with a radio announcer I remember talking about the Co. Durham village of Coondon. In a Geordie accent that might have been acceptable, but not in BBC English). We get everywhere, us lot. I dunno if you remember Elgee's, a joinery company in Bishop. That was Oscar Wilde's mother's family...
No great lover of Jez Lowe (I started out quite liking him but then he grew off me) but this seems like an album well worth seeking out. I'll start with Spotify...

The correct link is: < https://www.thepitmenpoets.co.uk/>

Thanks, Andrew. I've been away but have finally fixed it