The revived, evolving discussion at Salut! Live about the origins and differing interpretations of The Bells of Rhymney, Idris Davies's emotive 1930s poem from the South Wales coalfield that became an outstanding song in Pete Seeger's expert hands, reminds us of certain facts of life.

Getting on for 90 years later, the lessons of his words still ring true. 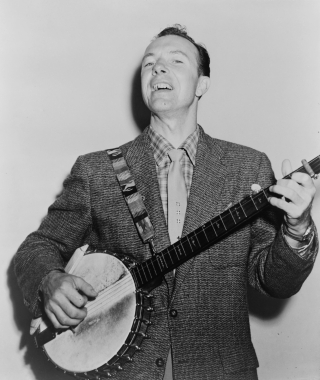 Everyone with whom I worked at The Daily Telegraph (1977-2006) knew it was a conservative newspaper, sometimes described as the house journal of the Conservative Party or just the Torygraph.

To people at my level, reporters and sub-editors, the politics didn't really matter.

Few of us were Tories ourselves. We reported the news as well as any media outlet and did so as fully, fairly and decently as we could. Tub-thumping right-wing rhetoric was the preserve of the columnists and leader writers, people we often quite liked even when finding them amusingly old or young fogeyish.

When it came to industrial disputes, the paper's editorial line was one thing, our reporting another. Union leaders or the workers themselves were given their say and many of them appreciated this.

Occasionally, the Torygraph would spring a surprise. I look back with some fondness on Max Hastings's editorship; he was not especially friendly towards me, except for the occasional herogram for work done to his liking, but his legitimate denunciation of the American bombing of Tripoli, and the way British secret services ensnared a rotten, murder-in-mind IRA gang in Gibraltar and orchestrated its assassination by the SAS, were shining examples of an essential sense of fair play.

This departure from a Blimpish rightwing narrative won him no Brownie points from Conrad Black, then the owner, but showed him to be a product of that lesser-spotted breed, the human one-nation Tory.

Look at papers of the right today and you do not need to be much more than left of centre to see that their content, news pages included, owes nothing to independent thought or fair-mindedness but might have been written, edited and commented upon by hypocritical employers,  hard-of-thinking ministers or ERG neanderthals.

A man like Mick Lynch,  the striking railworkers' leader, may run rings around interviewers and opponents (my only quarrel with him is that he clings to the self-deluded idiocy that Brexit is to be admired); to the Daily Mail, as well as to Boris's henchmen, he is a dangerous, hard-left wrecker, guilty of greed because his senior position brings him a good salary and mindless militancy because he sees his job as fighting to improve the lot of his members.

Idris Davies, who started working life as a miner, knew all about the dynamics of labour.

He saw the coalowners for the grasping tyrants they often were, bemoaned the failure of the 1926 General Strike to bring about change and - as a man who had been injured when young in a colliery accident - agonised over the wasted life of pit disasters.

In this mini-series-within-a-series, we have seen and heard several versions of his poem-turned-song: Seeger himself, the Byrds, Judy Collins, Robyn Hitchcock, Bob Dylan's son Jakob (with Beck), Oysterband, Mick Softley, John Denver ...

The list could on and does. Readers, responding here or at Facebook folk music groups, keep coming up with other versions. So let us continue:

John Denver's earlier interpretation, with the Mitchell Trio, has been heard but there are also live performances. Bill Taylor regrets the disappearance of a “spine-tingling" clip of him singing it live in Russia and speculates that it may be part of the collateral damage of Putin's vile war. I love the fact that Denver made a point of touring the Welsh valleys, eager to get an impression of the people and places he was singing about, before a gig in Cardiff. This is from a London concert ....

And back to the Byrds. Chris Hillsman, live in Colorado, does a fine job (with Herb Pedersen playing his part, as Bill mentions in his comment). It reinforces my thought that this is such a great song that any competent singer/musician can have a fair stab at it provided he or she feels its raw passion and meaning.

Joan Baez, live in Cardiff on her farewell tour, sang it, too. I cannot locate a clip. But I can offer, courtesy of Eileen Jennifer, this glorious version from 1963 by the Ian Campbell Folk Group. How I missed it with the first and second posts is a mystery.

I am not so keen on The Alarm's version from the 1980s, though I appreciate that others greatly enjoy it.

To give them credit, The Alarm had more signs of taste than most alternative rock/new wave/post-punk bands and did change their name from the straightforwardly punk original, The Toilets. And they increasingly embraced the Welsh culture and language in their work. Two cheers...

I still agree with Stan Wilson that Pete Seeger, live in Australia 58 years ago, delivers the song to perfection. But if only for now, let us end where it started, with Idris Davies reciting his own work ...

And yes, there may be still more to come ...

Once again, John Denver rises head and shoulders above everyone else. He really does a superb job with this song. But the Ian Campbell Folk Group's a cappella version is also one to play again and again. As I said earlier, that one was entirely new to me.
Two other new ones here, as well. I very much like the way Chris Hillman and Herb Pedersen (let's not forget his contribution) do the song. I also rather like The Alarm's interpretation. There's a raw simplicity to it that I think suits the words rather well. For some reason, I found myself thinking that Idris Davies might not his head in approval, too.
It's good to know there are so many different versions of the song out there. It's been served well.

NOD his head, I meant. I can't imagine Idris Davies ever notting his head.