And still they keep coming.

No sooner had I added the John Denver version of The Bells of Rhymney to the original file - posted all of 50 instalments of the Cover Story series ago and now updated here - than new suggestions appear.

As James North commented at the 60s 70s Facebook folk music group, it is a much-covered song. He offers a version by the late Mick Softley, a stalwart of the UK folk scene, and it is a worthy effort. 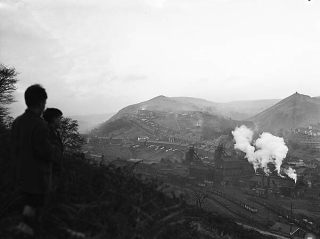 What started out as Idris Davies's stirring poem, first published in 1938 and evoking a Welsh mining disaster and the failure of the 1926 General Strike to improve the miners' lot, has been performed by countless artists since Pete Seeger turned it in to a song in 1959.

Schools on both sides of the Atlantic have used it as a study resource and, contrary to my earlier belief, some of the artists covering Seeger's piece have also corrected the pronunciation of Rhymney to make the first syllable "rum".

Seeger himself came to do so though unless my hearing is playing tricks, this clip from a live performance in Australia in 1964 shows him having it both ways.

Roger McGuinn, the Byrds founder, gives the audience a laugh when pausing knowingly to correct Rimney to Rumney, during a solo gig in Burgess Hill in 2006.

Click on the link to see it - I cannot embed the video here,

I've just remembered that another reader, Dave Sutherland, interrupted whatever he was up to for his birthday, to mention Ralph McTell's "more than passable" shot at the song. I haven't yet been able to locate a clip, though I may have the version somewhere in my record collection.

And Shawn Wolfe cited his own introduction to the song, Robyn Hitchcock's interpretation drawing heavily on the memorable, jangling guitar sound of the Byrds.

Hitchcock was a new name to me - I don't get out much - but has what Wikipedia tells us is a "dedicated cult following" ...

And then there's Judy Collins, a singer I've (mostly) admired for decades. There is much to like in her; I even warmed to her memories of sipping pints of Guinness with Sandy Denny on visits to the UK. This is one of many clips of Collins singing the song.

Best of all, for me, in this batch of versions I had not encountered before is suggested by Bill Taylor (who will not, I suspect, approve of the Collins version).

It's unfortunate that since the Russian invasion of Ukraine, John Denver's spine-tingling rendition of the song at a concert in Russia seems to have been taken down from Spotify etc.

But I offer this as a very worthy version, done by Jakob Dylan and Beck from the 2018 movie Echo in the Canyon, hosted by Dylan and examining the sometimes amazing music that emerged from the Laurel Canyon neighbourhood of Los Angeles in the '60s

If you haven't seen the film, it's well worth seeking out. It gave me a new respect for Dylan the Younger.

Posted at 11:40 AM in Cover story, Judy Collins, Pete Seeger, The Bells of Rhymney | Permalink | Comments (3)

You're right, I'm not keen on the way Judy Collins does the song. Altogether too mannered and self-conscious. But I like Mick Softley's rendition very much. There's something in his voice that I find reminiscent of Vin Garbutt (now THERE would have been a version!). Robyn Hitchcock? A (or maybe B-minus) for effort, I suppose, but not only is it too close to the Byrds for comfort, his voice isn't really up to the higher notes.
Impossible to check, now that it's no longer publicly accessible, but I seem to recall that in John Denver's Russian-concert version, his pronunciation was right on the money. I look forward to one day hearing it again.

Great article on an iconic piece. I’d like to add the Ian Campbell Folk Group version to your list. For the record, I love Robyn Hitchcock - probably more for his certain je ne sais quoi quality than his actual talent - the whole is greater than the sum of it’s parts. Anyways, this:

I love this! I've always been a huge Ian Campbell Folk Group fan but I've never heard this one. A cappella and correct pronunciation, too. Short but very sweet.