Song of the Day: Tommy Sands ... There Were Roses and the Brexit threat to peace

June 2021/July 2022 updates: re-reading this item first published in Salut! Live's  Song of the Day series 10 or 11 years ago, I am struck by a phrase I used to describe why the rationale for the Northern Ireland peace process seemed so compelling ... 'in the context of Europe'.

That was then. Now we have Brexit, which has introduced new and enhanced tensions just as was reasonably predicted. Naturally, and according to plan, the reprehensible Boris-Frost-Tory response is to blame the EU for 'our' decision to abandon the EU just as a disgruntled golf club member blames the club if his stroppy refusal to renew his subscription stops him playing there.

I am glad to say the power and eloquence of Tommy Sands's great song triumph over this shameful government interpretation of 'the will of the people'.

Please bear in mind that what you read below was written in 2011; it was already known then that Northern Ireland voted clearly against Brexit at all and it is known now (a year or so on) that most NI parties and elected politicians bitterly oppose the Government's desire to appease the DUP and unlawfully break the Protocol to which Boris signed up as part of his amazing, oven-ready deal     ...

A grim and ultimately pointless return to violence by a few disaffected republicans, the sort of people who thought the Omagh bombing was a good thing, has threatened to send Northern Ireland back towards the rotten times its people endured for 30 years before the Anglo-Irish agreement brought a flawed peace.

I hope they fail, as they richly deserve to. Grievances remain, for sure, and power-sharing of any kind in such a divided community is always going to fall a long way short of perfection.

For all that, in the context of Europe, 2011 and common humanity, the shortcomings of the peace process do not justify so much as a cut finger inflicted by dissidents.

Four years ago, I wrote this in a piece at Salut! Live:

The Troubles brought desperately sad and often tragic events to Northern Ireland, and the impact was felt far beyond the six counties that make up the province. There seems reason to hope that the stumbling march towards peaceful reconciliation of the competing demands and traditions has at last produced something that, while a long way short of perfection, could hold. But it is worth remembering that great art of one form or another often has its roots in times of bitter sorrow. Songs of poverty and emigration, struggle and warfare and, on a more mundane level, lost love dominate the folk music repertoire. The Troubles were no exception, offering abundant inspiration to gifted musicians, singers and writers.

And here is how I described Tommy Sands's song, which has been superbly covered by others but, for the sake of this series, is rightly left to its composer:

The anguished story, based on fact, of two friends from either side of the Protestant/Catholic or, if you prefer, Loyalist/Nationalist divide, who became victims of tit-for-tat killings. Cara Dillon also sings an excellent version, as might be expected from a sensitive young woman who grew up not far from Greysteel, scene of one of the worst single instances of mass murder.

Tommy Sands gets my vote because it was his words, and his voice, that originally and so searingly captured the helplessness of ordinary people in the face of such evil. 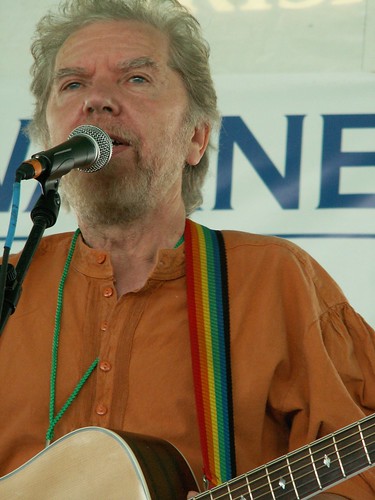 Image: Cindy Funk * Tommy Sands sings There Were Roses on his album Singing of the Times, which can be bought at this Salut! Live Amazon link

This is such a beautiful song. I'm going to look up the Cara Dillon version, which I haven't heard yet. I first heard this sung at an Irish pub in Berkeley, California. It's one I've always meant to learn.