Home Archives Profile Subscribe
Cover Story: (61) Underneath the Stars. Kate Rusby, Voces8 or Western Illinois University Singers
Song of the Day: Tommy Sands ... There Were Roses and the Brexit threat to peace

Salut! Live is essentially a folk music site. Every so often it veers off in other directions ...

On stage at the open-air Pinede arena in the French Riviera resort of Juan-Les-Pins, Paul Anka cruised with impressive professionalism and style through his songs, those he had hits with and those he wrote for others.

In the park outside, our age of terrorism meant few eyebrows were raised at the sight of young soldiers patrolling the park in twos, threes and fours, hands gripping the sort of lethal weapons European countries supply to the military and American gun dealers sell over the counter to pretty much anyone. 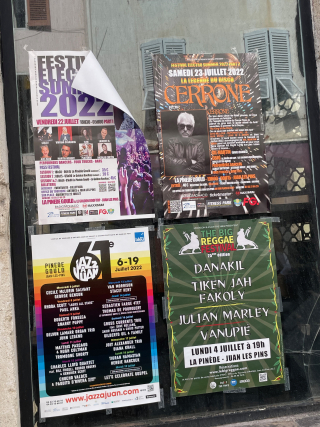 We were in the park outside. Deterred by ticket prices of between 60 and 140 euros, we joined the paupers and chancers outside the main gates leading into the arena. How do you review a concert you don't attend? Well, from there, we could see and hear a lot - and it was well worth the relative discomfort to do so.

At 81, Anka remains a compelling entertainer, lucid and alert, his voice still strong and his desire to please the crowds intact. He repeatedly broke into French in his between-songs patter, a gesture that always goes down well with audiences. It may have something to do with his Lebanese roots (and first marriage, to a polyglot Lebanese diplomat's daughter), if not Canadian encouragement of bilingualism.

On a bench near us, a French woman of advanced years sang along, mouthing every word just as she had done with the recorded warm-up medley of Queen, the Beach Boys and the Beatles. An elderly couple danced to Anka's music, jiving to the faster songs, smooching when the pace slowed.

It was an extraordinary show. I am not an Anka fan but enjoyed it immensely. It was another way of savouring the delights of the Juan-les-Pins jazz festival without breaking the bank - music can be heard for free wherever you sit to drink or eat. 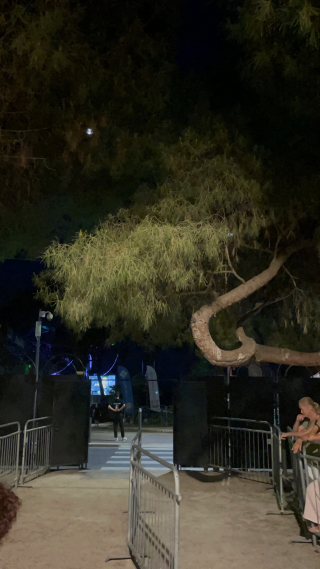 The set list takes us through the various ages of Paul Anka, from the Sinatra songs he remembers from childhood to those he later wrote for him and so many others, Buddy Holly and Tom Jones included.

He was an early starter. At just just 17, asked by Holly to write a song for him, he came up with It Doesn’t Matter Anymore, his last hit before he died when a chartered aircraft flying him between concerts crashed, also killing Ritchie Valens, The Big Bopper  and the pilot. "At least it will help look after Buddy Holly's family. I'm giving my composer's royalty to his widow (Maria Elena Santiago) - it's the least I can do," Anka said.

I'd forgotten that he took Comme d'habitude, a French song  composed by Jacques Revaux with lyrics by Gilles Thibaut and Claude François and wrote a version, with lyrics unrelated to the original, for Sinatra to make it his smash hit signature song (admittedly one of several). 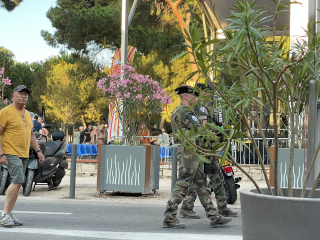 When I posted at Facebook, a former colleague, Corinna Honan, replied with a priceless anecdote:

Remember pitching up to interview him and asking - on a whim - if we could spend the whole allotted hour on My Way. Boy, did he deliver - talked me through each line and how it related to his life, etc. Utterly charming man. He must be stupendously rich on the Eng language royalties alone.

I also mentioned that Anka's band was tremendous and singled out his fiddler. "She was dazzling," I wrote, unsure of her identity. My pal Bill Taylor filled in the detail: Eliza James. "She's quite something. The list of people she's accompanied and places she's played seems never-ending."

My photos, the one used and others rejected, suggest a much poorer view than we actually had. At one point,  some jobsworth closed the gates, soon reopened to applause from our fellow outsiders. 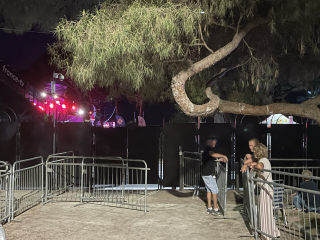 We left early to avoid being caught in the departing crowds so I guess but do not know for sure that the finale  will have included My Way and Diana.

As we wandered through the park back into the town, it occurred to me that an artist to whom I had barely given a second thought since childhood had made me like him.

There are some remarkable violinists who have turned their classical training towards rock. I'm thinking Chereene Allen and Rosie Langley, both of whom have worked with Jeff Lynne/ELO (her sister, Amy Langley, has played cello with Lynne), and Lizzie Ball who I saw back in 2013 in Toronto with Jeff Beck and Brian Wilson (odd combination but it worked). She was superb.

He sang it in Juan-les-Pins, Sharyn. He also injected Purple Rain seamlessly into Crazy Love which made me wonder whether he felt Peince's song ripped off his