Home Archives Profile Subscribe
Windsor some, lose some. Did I see Cream there in 1967?
Leon Rosselson: me, Brassens and the Last Chance, touching on Brel, Sylvestre and (always last) Ferré

June 2022 update: 13, nearly 14 years on from when this item originally appeared, I have finally got round to adding the song I most easily associate with the Grehan Sisters, Cricklewood. There was something irresistable about the Grehan Sisters, three Irish siblings who'd crossed the Irish Sea to live, not in Cricklewood (a part of n0rth-west London where the Irish often put down roots) but in Manchester.

There was nothing sophisticated about the Grehans. But their performances, spanning the last six years of the 1960s, had a sense of exuberant abandon perfectly suited to the age. They were instantly likeable while also seeming fiesty - long, it feels now, before that over-used word started to be applied to strong women) and just a little bit wild. The eldest sister Marie (on the right in the photo) died in 2020 aged around 75. I am not sure how Francie and Bernie are doing .... 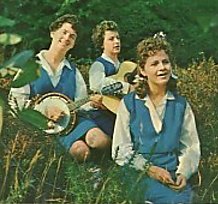 So here's something to be going on with. This posting started out as an excuse to bring you a film clip from the 1960s, rediscovered in the 1990s, which is described as a sort of uncompleted Irish Spaghetti Western, a musical that fell foul of financial constraints.

Its appearance here was inspired by a rekindled Mudcat thread about the Grehan Sisters. Fondly remembered from the folk clubs of North-eastern England back in the late 1960s, they were seen singing** (though not, sadly, Cricklewood, which is the song of theirs that streams into the consciousness at any mention of their name) and also offering a burst of the trademark spoon-playing.

There was a lot more of the Dubliners, and some Johnny Moynihan, plus one or two others lost on me through lapses of memory or gaps in knowledge.

I did wonder whether the jailer's daughter who visited Ronnie Drew, sentenced to hang as a serial burglar, in hopes of springing him from his condemned cell, might be the girl from the Tinkers. But that was just a guess. It was good stuff. And it lasted 37 minutes. That gave me time to come up with some winner in a Maddy Prior-related competition ...... but now, four five years later, the clip is no more, as a reader (Jan 2013) points out.

In its place I have put the sisters singing The Lake of Coolfin. AT least I was at last able to correct the spelling of rediscovery, from resdiscovery, in the headline.

** not for the squeamish: remember, however, that it was entirely commonplace in those days, even in English folk clubs, for people to sing Irish rebel songs.

We were at the early stage of the Troubles, that is to say before bombs started going off in England, and the songs related to risings and individual episodes from history.

Some anecdotes/further information/comments on the film (based partly on the memory of events a long time ago - I sometimes struggle to remember things from 20 minutes ago).

I was last in O'Donoghue's in August 2000 and at that time it had not altered one little bit from when I used to go there in the 60's. Except for a picture of Finbar Furey over the bar!

Kevin Sheldon was English and worked for RTE (a much smaller enterprise in those days) as a producer. He was responsible for a regular TV programme called "Ballad Session" as I remember.

The McKenna's were a band who played there on Sunday afternoons 12- 2.00 it would probably have been. I always remember them singing Van Diemen's Land

I lived at Holyhead at the time and went across fairly frequently - not sure how I discovered O'Donohue's but I did. I had some great times in there and indeed met Joe Heaney in there - I was a life long fan - and we went upstairs and had some soup courtesy of the landlord during Holy Hour. (The pubs shut for an hour - maybe 3-4 possibly 4-5. Landlords loved it, gave them time for lunch and to clean places up a bit. The landlord at that time was called Paddy - Paddy what I have no idea!!

As you look at the front of O'Donoghue's that doorway on the right in fact leads to a yard. There were two rooms - first as you went in was the bar - then into the back "music room" where must of the filming seems to have taken place.

Francie, Bernie and Marie as I remember them - definitely Bernie who played the spoons. They were a bit "female Clancy Brother's" with a hell of line in rebel songs and very uncompromising. I doubt they had been to Britain at that point when that film was made. I helped run the Watersons club in Hull (I was a customs officer hence the move Holyhead/Hull) and we booked them - but that was almost certainly 1967. We often put the artists up and the Grehans were given a room downstairs - all the rest of us were upstairs. They clearly felt they might be in some danger because meeting them later we found out they had jammed a chair under the door handle to make sure we didn't attack them in the night!

Thanks for making this available. It captures a very specific period in time when the ballad scene was at it's height and before the transition to the Folk & Irish Traditional revival took off led by Sweeney's Men, Johnnny Moynihan being the link. The Grehan Sisters are the highlight for me.

Help !! The video has disappeared.
Nothing happens when I click on the arrow.

Quite right, John. It has slipped from reach and has, since you alert me to its disappearance, been replaced.

I remember the sisters at the Caley Cinema in Edinburgh in 1968. I drew a psychedelic sign for them which they autographed. I just discovered it today and it brought back sweet memories.

Robert: send me a copy at colinrandall1@gmail.com and tell me more about the meeting with them and I shall publish it with pelasure

Great stuff. Club-style folk music as I remember it. We had the Grehans at the Aclet once, didn't we, or is my memory at fault? There surely can't have been another sisterhood that featured spoon-playing?
(PS... the editor in me feels compelled to hark back to my earliest days in journalism, reiterated throughout my career, when writers, either of stories or headlines, were urged to avoid using "feisty." This was partly because it was a bit of a cliché but mostly because it was very often misspelled as "fiesty." Just saying...

It also strikes me that "Cricklewood" bears a certain resemblance to a more traditional song,
"The Pricketty Bush," which I believe your Phil used to sing sometimes at the Aclet.

We often put people up, including them. They were a bit wary about sharing a house with us four blokes especially overnight, and stayed in the lounge together. They later confessed they had put a chair under the door handle to remain inviolate! Their parents had a pub in Boyle - the Crescent I think it was called.