Rachel and Becky Unthank are Geordies, loyal to Newcastle but with family ties to Middlesbrough. Salut! Live is edited by me, a Sunderland supporter, and by happy coincidence most contributors share my allegiance so were chuffed to bits by events at Wembley on May 21.

But don't worry: only passing reference to that game (plus a couple of snaps). Otherwise, Andrew Curry offers this admiring view of the Unthanks' night at the London Palladium on May 29. The clip I choose is not their mesmerising version of The Bay of Fundy but a song regarded by Adrian McNally, a key member of the band but also its manager, as North Eastern music at its finest   ...

Two of the North East of England's better exports have ended up in London in the second half of May.

Sunderland AFC came to Wembley, and a week later the Unthanks arrived at the London Palladium. Both were triumphs.

The version of the Unthanks that played at the Palladium was the big band version – 11 musicians, including Rachel and Becky. The line up behind them: musical director Adrian McNally on piano; a string quartet which included longtime collaborator Niopha Keegan, who also sang on some numbers; Lizzie Jones on trumpet; and guitar, bass/electric bass, and drums. 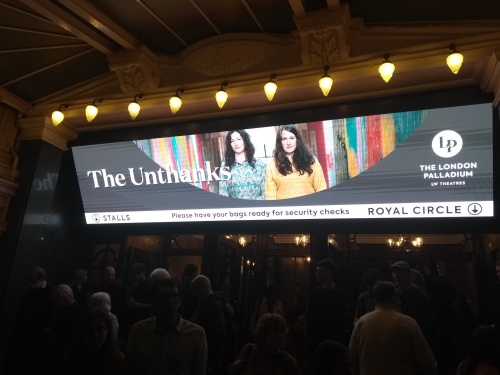 Their two sets mixed up songs from their forthcoming record, Sorrows Away, including the single, The Bay of Fundy, some of the North Eastern songs they have made their own and assorted songs from the folk repertoire and elsewhere.

Obviously one of the secrets of The Unthanks’ success is Adrian McNally’s arrangements, and there were moments in the concert when these were sublime. In the first half, for example, a full and rich arrangement of Sandgate Dandling all but segued into King of Rome, with Lizzie Jones’s trumpet soaring above both.

It turned out that McNally thinks that Sandgate Dandling is the finest song in the North Eastern canon, and - if the onstage chat between him and Rachel was to be believed - he had a plan to make a whole record just of versions of it. On the night we had to get by with a nine-minute version, with an extra verse in which we hear from the keelman, reassuringly, just before his reputation is completely trashed by his wife.

But they also do the quiet stuff well. The set opened with a version of The Great Selkie of Sule Skerrie, also sung by June Tabor, here done all but a capella by Rachel, Becky, and Niopha Keegan, with a hint of keyboards underneath it.

In the second half, Niopha Keegan joined them again for a version of the Irish song My Singing Bird, with some traditional fiddle (also Keegan) and a muted arrangement from the band. Felton Lonnin, which opened the second set, also benefited from a subtle setting.

Working with some of the same musicians over a decade means that the band is tight - if that’s not an odd description for a folk band - and more than a decade of performing means that The Unthanks know how to craft a show.

Some of the song sequences here were terrific. Felton Lonnin, for example, gave way to an exuberant version of Whistling Women, written by Maxine Peake for a show for Hull’s year as City of Culture that The Unthanks had performed in. The Royal Blackbird, a Scottish song loaded with Jacobite references - another big sound - came in an arrangement that featured a staccato guitar line from Chris Price.

And the version of Mount the Air that closed the second set was another rich reinvention of a sing that they had recorded before. In particular it was blessed by a technically dazzling trumpet solo by Lizzie Jones, whose sound seems central to the very distinctive arrangements that mark the work of The Unthanks over the last few years.

All of this was interspersed with a bit of clog dancing, some light audience participation, and the tale of the "merch wars" that are going on between artists and venues.

During the first set Adrian McNally, who doubles as the band’s manager, explained that artists have stopped selling merch at venues because the venues expect to take a cut of 10-15 per cent (the Palladium expects 25).

So he announced that any member of the audience who bought online with a concert code in the next 24 hours would get a 25 per cent discount - “we’d rather give it to you than the Palladium” - to warm applause. There was also a Plan B: a van parked round the back after the show.

I think people thought he was joking when he announced this, but no: there was a van round the back afterwards, selling merch, with a member of the Palladium’s staff helping to manage the queue.

The Unthanks sisters have also been writing songs during lockdown, which I think is a departure for them. Becky’s was more impressionistic, vocals as sound rather than story. Rachel’s sounded more like a traditional folk song, about a walk by an old coke oven near her home in Northumberland.

And for all of McNally’s invention as an arranger, it is the sisters who make the band what it is.

Although I’m suspicious of the notion of "blood harmonies" - sibling harmonies are said to have a particular purity - it is because this is as likely to be from nurture as from nature. The quality of the sound they create when they are singing together is a thing of beauty. During the concert they sometimes cut through the arrangements, sometimes rose above them.

The new record isn’t quite out yet—it’s been pressed but not packaged yet, and can be pre-ordered online. Until I heard about the merch wars I thought this sounded like bad timing. A smaller version of the band - five people, not 11 - is touring with a slightly different set of songs from later in May.

If you'd like to read more about the Unthanks, including a comprehensive interview with Rachel from several years ago, check out https://www.salutlive.com/unthanks/

** And two reminders of that other North East in London event: 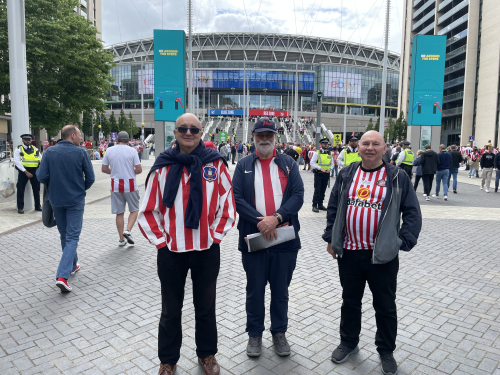 Before: me, left, with Pete Sixsmith and my brother Phil before the League One playoff final on May 21 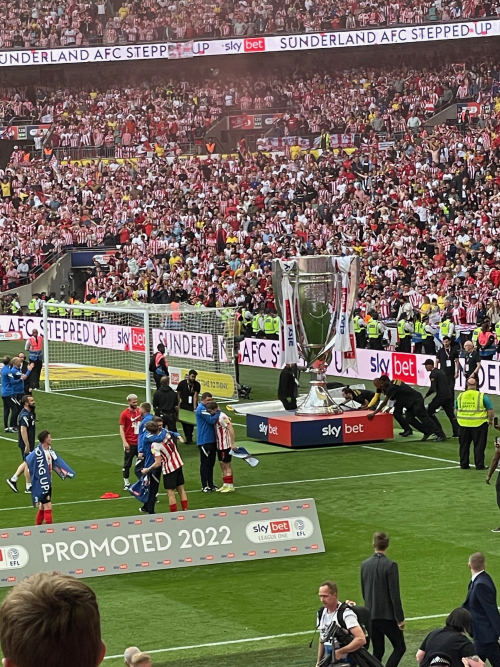