Politics invade this site from time to time. I am writing from France which has again resisted the best efforts of the extreme right to take power. It got closer than ever this time - Emmanuel Macron's comfortable 17-point majority conceals the election-on-election progression of the far right vote. On the eve of polling - yes, I took part thanks to dual citizenship, though my vote was cast by proxy in London - I heard a great black French singer touch gingerly on the next day's events ....

Magical, mystical, traditional… three of the words Imany used to describe the cello when she finally began to talk to her wildly appreciative audience at the Carré cultural centre on tbe outskirts of Sainte-Maxime in the south of France.

It was a fitting tribute to tbe instrument which, eight times over, constituted the only musical accompaniment to her magnificent dark, lush, soulful voice. The virtuosity, energy and passion of the these  young cellists, five women and three men, and the choreography of their stage movement, contributed enormously to an enthralling musical experience.

It was the eve of the decider in France's presidential elections. When Imany addressed the packed house (we could reserve only single seats two rows apart but luckily ended up together thanks to a lone female audience member's willingness to swap places) urged people to "reflect well" before polls opened. She hoped for a better outcome than in the first round but I do not think she had in mind a stronger vote for Emmanuel Macron's far-right challenger, Marine Le Pen.

Macron prevailed with ease, without being able to prevent a 13m vote for Le Pen that leaves a deeply unpleasant taste in the mouth. Saint-Maxime was among the communes that wanted Le Pen to win (54-46 in her favour) and it honestly beggars belief that even one person watching this supremely gifted and charming woman of African descent would have reflected overnight and cast a vote for a hideously xenophobic (and economically illiterate) project. 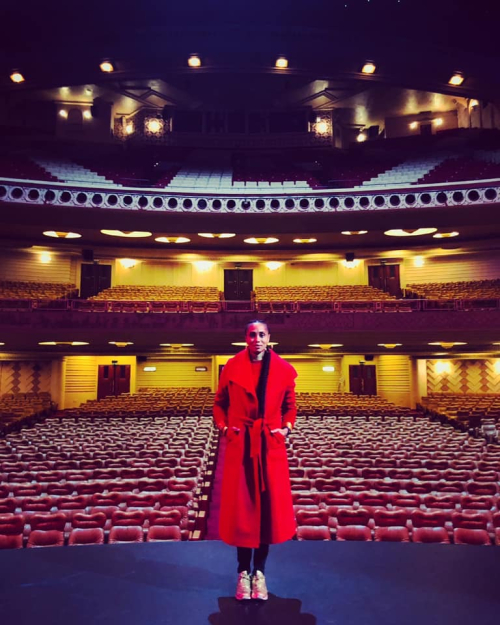 Imany, born Nadia Mladjao in France to a Muslim Cormoran family, horrified her father (a fireman in the French Army), by moving to New York and working as a model.She stayed for seven years but gradually turned her attention to a childhood dream to sing. This she does exquisitely, as witnessed by two outstanding albums, The Shape of a Broken Heart and The Wrong Kind of War.

The present tour is based on a third album featuring her innovative covers of songs made famous by artists including Bonnie Tyler, Madonna, Cat Stevens, Elton John and Jacques Brel. Her Total Eclipse of the Heart is sensational, Brel's If You Go Way is safe in her hands and others shine with her touch in ways thatm for me, the originals did not.

In Sainte-Maxime, the audience was treated to only two of the older songs, extended versions of Take Off Your Clothes and You Will Never Know. I thought it was a mistake not to include more, though I understand why Imany wanted to promote and concentrate on her Voodoo Cello covers. I will add a clip of The Shape of a Broken Heart to make up a little for it.

Initially, I thought it was also a mistake to plough through the majority of that album before addressing spoken words - merci beaucoup, merci - to an adoring audience. Then she launched into a warm, candid potted autobiography from which we heard that "burn-out" - the phrase works in French, too  - had for a time turned her childhood dream into a nightmare. It was an engagingly intimate opening of the heart, which proved her earlier silence was no mistake at all.

About Sainte-Maxime.s voting shame, I can do nothing. Perhaps all our fellow concert-goers were among the honourable 46 per cent.