Home Archives Profile Subscribe
Ukraine, Tom Paxton, Eric Bogle and songs of war
Doreen Henderson RIP: the sad loss of a fixture of the the Elliotts of Birtley

Reporting the Troubles and sneakily catching some wonderful Irish music

As we recoil in horror from the evil of  Moscow’s war on Ukraine, and feel disgust at the hard-of-thinking whataboutery of Putin apologists in the UK, let us not forget conflict at home.  Even what Mo Mowlam called, when Secretary of State,  Northern Ireland’s ‘flawed peace’ is now endangered by fall-out from the hideous Brexit its people voted against.

My old pal Deric Henderson, an outstanding Belfast-based reporter/Ireland editor for the Press Association and more recently a successful author, asked if I'd be willing to write a chapter for the second edition of Reporting the Troubles, a compilation of journalistic memories of covering traumatic events north and south of the border.

I jumped at the chance, having loved the first edition and wondered whether I'd actually have much to offer such a project.

Knowing my musical passions, Deric suggested something diddly-dee related. This was the result. If it offers a change of pace, I remain in awe of so many confreres and consoeurs for their much more substantial contributions.

My chapter is reproduced here with the consent of Deric and his co-editor,  Ivan Little, and the book, published by Blackstaff Press, is in shops now or available to order at https://black staff press.com/reporting-the-troubles-2-9781780733258 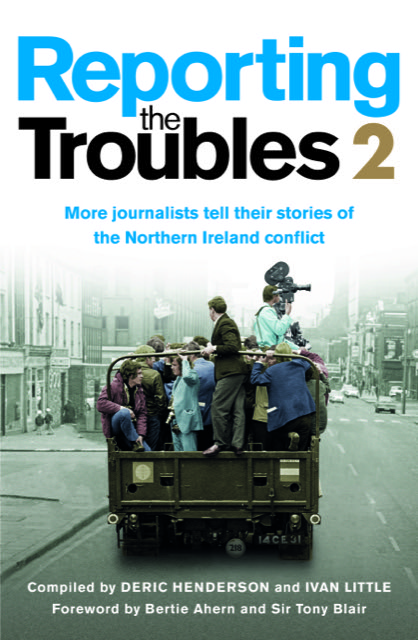 For the great Gaels of Ireland
Are the men that God made mad,
For all their wars are merry,
And all their songs are sad.

If only. No conflict, and certainly not the Troubles, is truly merry, whatever romantic thoughts GK Chesterton entertained when composing this poem, The Ballad of the White Horse. Since the suggestion of insanity as a national trait is best ignored, that leaves us the songs.

My love affair with Irish music and folk music generally has sometimes been described as sad. But from indisputably mournful laments to the infectious vigour of diddly-dee, that music has given me six decades of real joy.

Covering events on both sides of the border for all but the first few years of the ‘irregular war’ could be challenging, but there was some time to mix work and pleasure on trips I made across the Irish Sea from London for the Press Association and later The Daily Telegraph.

Occasionally, my worlds of journalism and music would collide. As well as being a reporter, I was the Telegraph’s folk bloke.

At the moment the IRA bombed South Quay in London’s Docklands, I was not in the Telegraph’s offices situated there but on a press junket in Donegal, enjoying a pint of Guinness.

I had just interviewed Mairéad Ní Mhaonaigh, singer and fiddler with the traditional band, Altan, which she had formed with her Belfast-born husband, Frankie Kennedy.

Frankie was a richly talented musician and a lovely, thoughtful man with whom I had profound discussions about the Troubles. He was just 38 when he died from cancer three weeks after the start of the 17-month ceasefire that ended with the bombing in February 1996. Though no apologist for terrorism, he would say one certainty was that whenever IRA atrocities aroused disgust in the nationalist community, the British authorities could invariably be trusted to do something crass or unjust to refuel the cause of violence.

Photo of  Mairead talking to me in Donegal the night South Quay exploded. I will add an appropriate credit to the photographer if I can check back and find who it was!

Talking about a man we both missed was remarkably easy for Mairéad and I that evening in Donegal, and she showed plenty of optimism for the future.

But then the news from London cast a cloud over the gathering. ‘I remember it well,’ I wrote years later at Salut! Live. ‘One of the band came over and asked, “Did you know there’s been a bomb at your offices in London? There’s a lot of walking wounded.”’ [In fact, two men – a newsagent and his employee – were killed.]

Instead of flying home next morning with the rest of the press pack, I was begging a lift to Stroke City to report on the broken ceasefire. It was from Derry/Londonderry that I had previously reported modest beginnings of peace, prompting one cynical colleague to say any subsequent hole in the road caused by a bomb should be named Randall Crater.

Over pints and televised football, I talked for a couple of hours with another Frank – an accomplished and charismatic musician and producer – about music, football and politics. Frank Gallagher is an Everton fan, as Frankie Kennedy had been, and they may have been on the box that night. But the conversation was dominated by his informed analysis of the ominous development. I distinctly recall this man of peace, with ears close the ground, sharing thoughts that helped me understand the background to the IRA’s return to terror.

Fast-forward to 2020; it came as no surprise to hear Frank Gallagher was so respected by John Hume’s family that he was asked to be the musical director for the former SDLP leader’s funeral.

Looking back, I am surprised at how often I was able to fit musical interludes into visits to Ireland. Far from being a distraction, they produced friendships and experiences that enriched my journalism.

I learned how Irish music and dance could bridge the Protestant–Catholicdivide. The BBC’s Wendy Austin told me about Protestants like her who had enrolled children in Irish dance classes – the colourful costumes bought in Andersonstown. Other parents cooperated and it made a pleasantly off-beat piece for the Telegraph.

A great friend, the late Neil Johnston of the Belfast Telegraph, was a Protestant from Omagh who presented an excellent BBC Radio Ulster series, cleverly entitled The Wrong Note, that chronicled the Irish music exploits of other Protestants.

Over the years, I saw Mary Black, Sharon Shannon, the Dubliners, the Chieftains, Ron Kavana and many more during these trips, without ever feeling I was compromising my reporting obligations.

One episode, however, sticks as clearly in the mind as the Donegal jolly that turned sour. It had nothing, at first, to do with music. I had taken a keen journalistic interest in the IRA’s murder of Tom Oliver, a 43-year-old farmer and father of seven from the Cooley peninsula, just over the border near Dundalk ,in 1991. He was tortured and killed over allegations that he had been a police informer. It eventually became clear that he had probably been falsely accused, perhaps framed to cover the tracks of a double agent whose IRA unit murdered him.

Whatever the full truth, it was a squalid act of supposed revolutionary justice, meted out without the least concern for human rights, ordinary decency or due process.

Some time later, I sat in a small London hotel interviewing Christy Moore. I knew there would be no room in my story for the wretched tale of Tom Oliver but mentioned him anyway. I have known Christy since the late 1960s, when he was a brilliant, hell-raising presence at English folk clubs, including ones run by me.

Our exchanges have always been frank, occasionally prickly. But I have warmly praised his work – yes, the Telegraph allowed that – and expressed particular admiration for the way his songwriting mellowed in tandem with the peace process.

‘You’ve written songs about British sins,’ I said. ‘Why not one about Tom Oliver?’ Christy’s answer came quick as a flash: ‘Write it with me,’ he said.

I am no songwriter and never did, of course. But some years after that, in 2001, the name of Tom Oliver came up again, in an interview with the Irish magazine Hot Press. Christy was describing his disenchantment with a cause he once found easy to justify: ‘Thinking of how Tom Oliver was killed and
how a kitchen porter was used in a proxy bombing, I find I’ve reached a point in my life where I can’t fucking take it any more,’ he said. ‘After Enniskillen, and now, I find I no longer can support the armed struggle ... it’s an armed struggle in which too many little people are blown away.’

I do not suggest anything I said first made Christy think about a despicable IRA crime. But I know from experience how he remembers the detail of conversation and would feel some satisfaction if my combined interest in Irish affairs and Irish music somehow touched a nerve.

A sad song it would have been for sure. But no, Mr Chesterton, the war that brought Tom Oliver’s death was far from merry.

* Colin Randall writes for The National (UAE). He was a reporter, chief reporter, executive
news editor and Paris correspondent for The Daily Telegraph and previously
worked for the Press Association and local newspapers.