When I started my Loft Vinyl series after my elder daughter gave me a turntable for Christmas, one of the first old LPs retrieved from the loft was instrumental (1940s boogie woogie from the piano-playing of Albert Ammons).

Over the weekend, I came across two more records of instrumental magic, totally different to each other and (at least in termw of chosen instrument) to the Ammons classic, and assailed the ears of loved ones by playing them.

Other members of the family have taken the easy route of ignoring the turntable's primary role and treating it as just another device on which to play tracks stored on Spotify and YouTube. Having spent hours crawling around the loft to renew acquaintance with my big old vinyl collection, I'm determined to give the best finds a spin. Kenny Ball and Stefan Grossman qualify for that description. 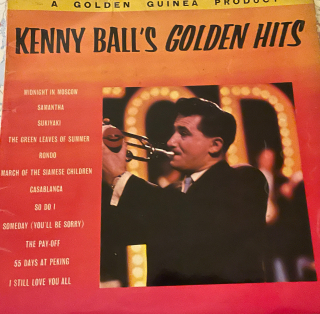 Kenny Ball was a jazz trumpeter and bandleader from Essex and assembled a great band that had 13 top 40 single hits including four in the top 10, topped or (according to which source you choose) nearly topped  the album charts and played at the wedding reception of Prince Charles and Diana, Princess of Wales. He continued touring until shortly before his death 82 in 2013.

Stefan Grossman, still with us at 76, is a magnificent American acoustic guitarist and music teacher who built a cult following in Britain when he arrived in London.

Following in the footsteps of Paul Simon and Tom Paxton, he befriended the best of the musicians on the thriving London folk scene and began a love affair with Europe. Perhaps a seven-year spell in Italy compensated for the disappointment of seeing a much earlier project - forming a Mamas and Papas-style group with Janis Joplin, Taj Mahal and Steve Mann - come to nothing,

I have no recollection of seeing Kenny Ball live (though read on for a delicious anecdote from someone who did a very good next best thing ) but I did catch Stefan Grossman during his days of touring the UK folk clubs. I know I saw him perform at least once, at an excellent folk club in Sunderland; my possibly faulty memory tells me Martin Carthy and Dave Swarbrick were on the same bill.

What I will never forget is the staggering virtuosity of the man, his charming way with the audience and further confirmation that I would never make more than a folk club strummer and picker on guitar. Grossman is not alone in bearing responsibility for my recognition of musical limitation. Bert Jansch, John Renbourn, Carthy, Richard Thompson and even my old pal, the late Phil Steele, had the same effect.

Two clips then. I'll select pieces that appear on my newly rediscovered records, Kenny Ball's hit Midnight in Moscow. This naturally appeared on the Golden Hits album (from the early 1960s) that you see photographed but my clip is from a live performance on the Morecambe and Wise Show on which the band had a regular spot.

... and Stefan Grossman, from Yazoo Basin Boogie from the 1970 album of the same name.

And now for two lovely comments posted at Facebook when I mentioned my new intended additions to the Loft vinyl series. Bill Taylor: Two great finds! I had Stefan Grossman's Aunt Molly's Murray Farm album in vinyl; a wonderful guitarist, still a favourite of mine. Did he spend some time on Tyneside? [Not sure he ever lived there but he certainly played NE clubs - Ed]I seem to remember at one point seeing him quite often on Tyne Tees TV. And Golden Guinea LPs... They were the first two I ever bought - one was Lonnie Donegan and the other the Flintstones (c'mon, I was probably not even into my teens). I liked Kenny Ball. And I came to love him... Back in the '70s, Lesley and I were in what passed for a nightclub in Pottstown, Pennsylvania (The Lion's Den it was called, in the basement of Cutillo's Italian restaurant) when the DJ put something on and said, "A bottle of champagne for anyone who can tell me what this is." I went over and asked if he was serious. He said he was and I said, "Kenny Ball, Midnight in Moscow. Kenny Ball was completely unknown in the States so the DJ was gobsmacked; I think he might have had to pay for the champagne out of his own pocket. To add insult to injury, when they brought it to our table and asked if we'd like it opened, we said no thanks and took it home. William Stock

I still have my collection of vinyl albums by Stefan G. I also enjoy his YouTube tutorials. I definitely learned a lot about finger-picking boogie guitar from him. Fantastic player!