Loft vinyl: (5) Steeleye Span and an embarrassment of riches

When I began my Loft vinyl series - see previous entries here - the harvest from ploughing through a vast but long-neglected collection of old LPs stored haphazardly in the loft, I expected to find albums by Steeleye Span.

I did not expect to unearth quite so many. My little montage represents the first fruits and with scores of records still to see, I would be surprised if more did not appear. Needless to say, I also have quite a few CDs. by the band, and such offshoots as Maddy Prior and the Carnival band,  and doubtless some cassettes. 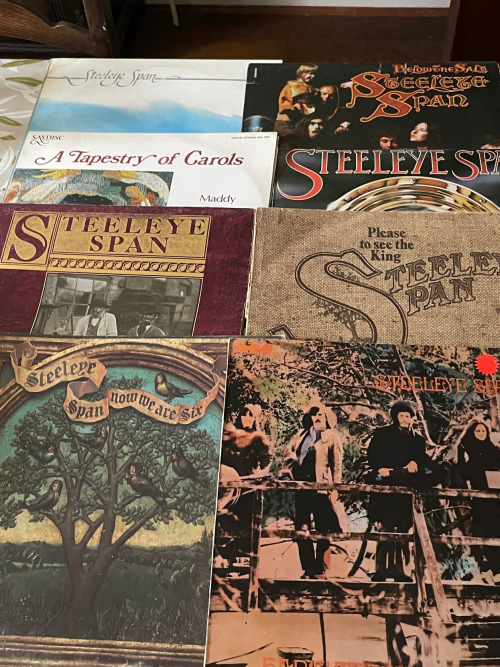 For now, I wish little more than to offer my modest news of rediscovery. Thoughts about each of these LPs streamed into my mind as I put them to one side to take back downstairs to whatever space I could find alongside the turntable my elder daughter bought me for Christmas, thus launching this exercise in nostalgia.

The first Steeleye record I bought, Please to See the King, is there. I found it in the record ship at Cecil Sharp House, HQ of the English Folk Dance and Song Society, after hitchhiking down to London from Co Durham to London one weekend, probably late in 1971, its year of release, and was instantly mesmerised by this riot of sound giving new depth to the old songs and tunes.

I could include a clip of almost anything on the album and be satisfied with my choice. I could delve into the other records rescued this afternoon and offer excellent tracks. I know many Steeleye fans think of Hark! The Village Wait, with Gay and Terry Woods part of the band, as their favourite. I like it, too, but nothing leapt out at me from a quick perusal of the back of the sleeve, whereas everything on Please to See the King brought instant memories into renewed focus.

Tell me I'm wrong if you disagree!

My chosen clip, though, is from that first LP of theirs that I bought. Lovely on the Water combines Maddy's sensational vocal, a great tune and sublime instrumental accompaniment.

You're not wrong - Lovely On the Water has to be the best ever Steeleye track. Love the guitar playing.