Home Archives Profile Subscribe
The morning after Burns night: memories of Eddi Reader with Boo, bawdiness and romance
Norma Waterson RIP: the passing of a towering figure of folk music

The Trimdon Grange Disaster: the deadly cost of coalmining and a fitting musical testament

My Sunderland AFC losing 6-0 today will be labelled a disaster. It is nothing of the sort. Humiliating, yes, or shambolic, unforgivable and of far-reaching consequence. Disaster is different,  for example when scores of men and boys go to work and don't come home.

This can be seen as a standalone item or as a new instalment in two series, Cover Story and Music from North Eastern England. I mention other songs about coal mining disasters and there are others unlisted. But I concentrate on the one that, until I am persuaded otherwise, I regard as the finest of the lot, those I know at any rate ...

I stumbled upon a new and, of first acquaintance interesting music discussion site - the Steve Hoffman Music Forums - and came across this list of songs about mining tragedies. 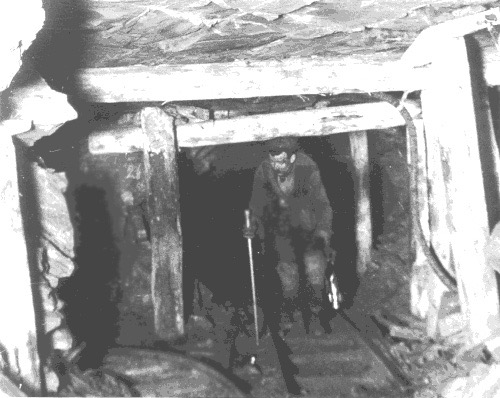 From the National Archives

The list was posted by someone signing himself byb1123, Rock and Roll Martian. He gave his location as Cincinnati, Ohio which I'll allow as a viable excuse for the glaring and otherwise inexplicable omission of The Trimdon Grange Explosion. My pique is equally explained by the fact that the scene of the 1882 disaster is 14 miles from the County Durham town where I grew up, Shildon.

I remember Big John from childhood. I loved it then, the story of the burly ruffian who gave his life to save others, but am not sure I'd go to any great lengths to hear it now. I know the Bees Gees' song, of course and The Gresford Disaster (by the Albion Band, clip added at the end of this post); Woody and one or two of the others ring a bell.

In any event, I posted this response:

Someone else has mentioned it in this thread but I honestly cannot see such a list complete without the Trimdon Grange Explosion appearing in it. It comes from my part of the world, County Durham, NE England, and was written by Tommy Armstrong, known as the 'pitman poet'. Tommy would write songs about coalfield life, selling the broadsheets to raise a little beer money. But this was intended to raise money for the widows and orphans of the 69 killed at Trimdon Grange in 1882. I think it's a fabulous song and I know of many fine versions from Alan Price to the Unthanks. I haven't heard the The Mekons doing it, as mentioned in the other comment, but will look for it. I touched on the song in a series on NE Folk Music ... Music from North Eastern England: (7) The Pitman's Poet, Alan Price, Unthanks, Whisky Priests and High Level Ranters

There was an error. Reading again about the disaster, I am reminded that despite 69 being at one time the official death count and the figure given by the Durham Mining Museum and Wikipedia, the true number of fatalities was 74 as drawn from the list of boys and men actually buried.

In a series of articles on the explosion at the HealeyHero website dedicated to the life of Phil Healey, a Derbyshire pit rescue volunteer and all-round Midlands coalfield character, you will find an eloquent and reasonably detailed sermon delivered by the Rev Oates Sagar, curate of Trimdon parish,.

Tommy Armstrong performed his song at the Trimdon Mechanics' Hall a few days after the disaster. It has been recorded by many respected figures of the folk world. Without even looking it up, I can name Louis Killen, Bob Davenport, the Ian Campbell Folk Group, Martin Carthy, Maddy Prior, Bob Cox and Benny Graham and the Unthanks. A quick Google search adds Isla St Clair, Swan Arcade and the Battlefield Band and I can also mention, from non-folk sources, Alan Price and the Mekons. My pal Bill Taylor saw Price finish a New York show with a heartfelt a cappella rendition and was mesmerised by it,

As was usually the case, the Pitman Poet put his words to an existing tune, though this has certainly evolved or changed altogether to produce the melody we hear in all versions known to me now. But what words! Tommy captured the anguish of the community as well as any reporter.

Let's not think about tomorrow
Lest we disappointed be,
For all our joys they may quickly turn to sorrow
As we all may daily see.
Today we're strong and healthy,
Tomorrow there comes the change,
As we may see from the explosion
That has been at Trimdon Grange.

Men and boys set out that morning
For to earn their daily bread,
Never thinking that by the evening
They'd be numbered with the dead.
Let's think of Mrs Burnett
Once had sons but now has none;
In the Trimdon Grange disaster
Joseph George and James are gone.

February has left behind it
What will never be forgot;
Weeping women and helpless children
May be found in many's the cot.
They ask if father's left them
And the mother she hangs her head,
With a weeping widow's feelings
She tells the child its father's dead.

God protect the lonely widow
And raise each drooping head.
Be a father unto the orphans
Do not let them cry for bread.
Death will pay us all a visit,
They have only gone before.
And we will meet the Trimdon victims
Where explosions are no more. 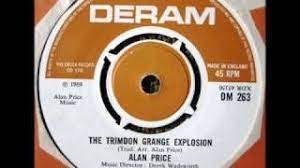 I'll leave you with three clips. The post-punk Mekons do very little for me but I admire the Price single, even with the orchestration absent from Bill Taylor's concert experience, and love the Unthanks' version despite the slightly off-putting jauntiness of the first verse.

And here, as promised, is the Albion Band's chillingly superb song about the Gresford disaster. Gresford is near Wrexham, North Wales. In 1934, a fire and explosion at the pit killed 266 men, a truly appalling waste of human life...

Great response from the Unthanks’ manager and band member Adrian McNally, via their Facebook group, to my minor reservation about the jaunty opening verse, reprised at the end:

To me Colin, the first (and last) verse is a hopeful prayer and the voice is the mining community. The likelihood of disaster is too much for a mining (or fishing.. insert dangerous industry here!) community to bear and contemplate. Let's not thing about tomorrow. The joy of the present must be clung onto and fears of tomorrow kept at arms length. The use of the group vocal and the gentle brass band march is meant to evoke this nervous but hopeful community spirit, not to mention the vernacular of their music. This then gives way to Rachel in the stillness, the lone narrator of a terrible tale - the reality that crushes the hope. And even after the devastating events, the community must go on, their men must return to the same treacherous conditions, in full knowledge of the dangers, hence the prayer returns with the same steady, even hopefulness at the end. All the best, Adrian.