The second item in my new series, featuring music rediscovered in the loft on vinyl after my elder daughter gave me a turntable for Christmas, celebrates a truly remarkable Irish supergroup, Moving Hearts, and their classic album The Storm...

The story has been told here before. In the days when record labels and artists' agents or publicists would send me albums, press junket invitations and tickets for gigs- always "plus one" - I found myself at the Hammersmith Apollo to see Clannad. They were awful*, at any rate for me since I never warmed to the change of direction on which they had embarked, and my wife and I left early.

But before anyone, band or support, had taken to stage, the fabulous album by Moving Hearts, The Storm, had been playing over the PA system. In fairness, any performer would have found it challenging to follow that. And I was delighted to find a vinyl copy in my neglected old collection up in the loft. 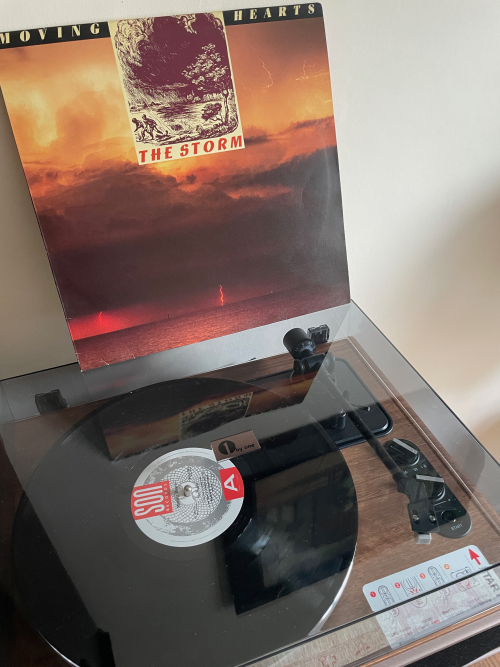 Produced by the Irish music legend that is Donal Lunny, The Storm was released in 1985 and combined the formidable musicianship of Lunny himself plus Keith Donald, Greg Boland, Eoghan O'Neill, Noel Eccles, Declan Masterson, Matt Kelleghan and Davy Spillane.

When I included the mesmerising opening track, The Lark,  in another Salut! Live series, Instruments of Pleasure, I wrote this:

Donal Lunny's genius as producer is revealed once more and the all-round standard of musicianship, including Lunny's but with Davy Spillane in sensuous, stunning form on uillean pipes, is lofty.

The Lark itself is utterly riveting, evoking power, subtlety, mystery and excitement as well as sheer top-drawer virtuosity. It is one of the finest pieces of Irish music I have encountered in well over half a century of listening. And the shaky old lofty ladder safely retracted, I welcome the liberation of the vinyl album it dominates.

And in case you need a reminder of Moving Hearts' sensational quality, here once again is that stand-out track from The Storm.

* Feel free to tell me I was unduly harsh on Clannad - and why you feel so. This is how I described what they had become: 'a brilliant but already inventive traditional band metamorphosed as a gooey melange of dry ice and mystic but aimless sounds'

Couldn't agree more about Clannad. Presumably their change of direction was carefully planned out but to my ears they totally lost the plot.
As for Moving Hearts, perhaps I should surrender what few folk-music credentials I may have because they're totally new to me. That's very much my loss. This is a superb band and The Lark is everything you say about it and more. I've just added it to my Spotify lineup.
To digress, why do we never seem to hear/read about Welsh folk music? It must surely exist.

I too will be getting my copy of The Storm out of storage for a listen. I remember loving Moving Hearts - a perfect progression from the music of Planxty.