The morning after Burns night: memories of Eddi Reader with Boo, bawdiness and romance

Jan 2022: better late than never. Had I thought of it sooner, there might have been a post yesterday to commemorate the birth of Robert Burns on Jan 25 1759. But then, Wikipedia helpfully states that Burns celebrations may be held on any other date.

I will limit this to a reminder of a terrific review by my pal Pete Sixsmith of a concert by the Scottish singer Eddi Reader, a superb interpreter of the Bard of Ayrshire's work, in Durham back in 2011. It passes the test of time with ease.

Eight years before that, I nominated Eddi Reader Sings the Songs of Robert Burns as my - and therefore The Daily Telegraph's - Folk Album of the year, justifying my choice with these words:

'Back in May, it was clear that only the most exceptional CD would prevent this being my record of 2003. Not even a vintage year has produced anything to get in its way. Beautifully accompanied, Reader's sublime, versatile vocals distinguish happy, maudlin and saucy examples of the bard's work'

Eddi Reader's sublime treatment of Burns songs also passes the test of time, so well that I am adding one of my favourite tracks from the album, Jamie Come Try Me, to this post. 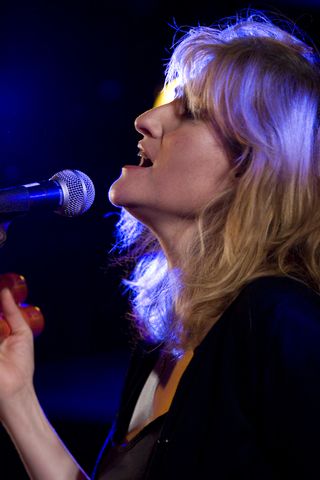 And this, from 2017, is how I introduced an earlier recycling of Pete Sixsmith's review:

As I browse the extensive Salut! Live archive for gems from the past to share with a (slightly) expanding audience, live reviews are not obvious choices.

I make an exception for Eddi Reader and this corker of a review, by my great friend Pete Sixsmith, of the night he saw her in Durham.

Eddi is one of many outstanding artists who were initally and inexcusably omitted from my recent spot of fun with Best Females Singers.

Sandy Denny and one of "the lassies Unthank", Rachel, did head my two main lists and I have also found room for Amy Winehouse (and, belatedly, Eddi).

When I told Eddi I had fond memories of her appearance at the Union Chapel in North London - "one of the best gigs I have ever attended" - some years ago, her reply was a classic: "I'm better now."

So here, from Easter 2011, is Pete Sixsmith's review. It passes the test of time with flying colours ...

In my younger days, when the high spot of folk music on the radio was Burl Ives singing The Bluetail Fly or Steve Benbow giving us a sanitised version of The Irish Rover, Good Friday was a day of unsuppressed misery.

Shops did not open, pubs kept to Sunday hours and, apart from a Rugby League match at Headingley, there was absolutely nothing to do as theatres and cinemas remained locked and shuttered.

Contrast that with Good Friday 2011 style: shops and pubs open all day, lots of football and Rugby League to watch, the theatres open. The Gala at Durham had a real catch for their Good Friday – they had the wonderful, delightful, superb Eddi Reader.

It was, she said, the last night of a long tour.

They had driven down from Glasgow, over the moors and into a Durham full of locals and tourists and into a packed house eager to be enthralled by this warm, witty and above all multi-talented woman and her excellent backing band.

Boo Hewerdine opened the show with a selection of his songs and then joined Eddi, Alan Kelly and John Douglas for almost two hours of glorious entertainment.

She played a grand set, mixing in songs from her latest album, Love Is The Way, with some old Fairground Attraction stuff and a great dollop of songs from the poet Burns.

She linked them with some wonderful anecdotes about love rivals in New York, large-breasted girls from Mauchline in Ayrshire and stories from the life of Burns – the Reader version rather than the authorised one.

Reader has a great voice which she stretches over some outstanding songs.

Some are written by her partner, Douglas, others by Hewerdine, who may well be the most underrated songwriter in Britain. New York City, Dragonflies, Dandelion and others were superbly delivered by the four of them.

She swayed and mooched around the stage, hitting the high notes and strumming away on her guitar while Kelly squeezed his box, Douglas plucked his uke and Hewerdine played brilliantly.

But it was the Burns songs that rang my bell. She is clearly a great fan of Robbie and admitted that she is rapidly turning into a Burns Bore, collaring people in the pub and telling them all kinds of things about the Ayrshire Farmer.

She chose the songs well. My Love Is Like A Red, Red Rose, was beautiful as was Ae Fond Kiss.

The softer songs were complemented by Charlie Is My Darling and the cheery song of male bonding Willie Stewart.

She gave us the stories behind them: Ae Fond Kiss is about Burns’s love for Agnes M’Lehose as she departed for Jamaica to try to forget him. Charlie Is My Darling describes a randy young man in a kilt who encourages girls to sit on his knee to see what will come up.

She has a lovely way with the audience and had us wrapped around her little finger.

The anecdotes were brilliant and told with a freshness that belied the fact that they were at the end of a long tour.

Like all great artists, she made you feel that you were the only audience that she was doing this show for. Good Friday became Brilliant Friday thanks to Eddi and her band ... Picture posted at Twitter by Eddi this week with this explanation: "My first professional employment - playing guitar in Thrush (I know, I know) from Falkirk - oh what laughs and high jinks"

** You can buy the deluxe version of Eddi Reader's magical album of the works of Robert Burns for under £9 at the Salut! Live Amazon link. Click anywhere on this paregraph. *** I think I must have had permnission to use the first photograph shown when this first appeared. If anyone knows its origins, please let me know so I can add a credit.

This is dreadful: oversung, overplayed, tarted up in the worst way.

I suppose I just love the way she tarts it up, oversings and oversees the overplaying. Wouldn't Burns have loved it, too?