Peggy Seeger: on tour at 86 and pondering the different functions of a Durham launderette

When is a launderette not only a launderette? As Peggy Seeger*, a mighty figure of folk music and activism, has come to know, it can in exceptional circumstances be a music venue, too. And a coffee bar. 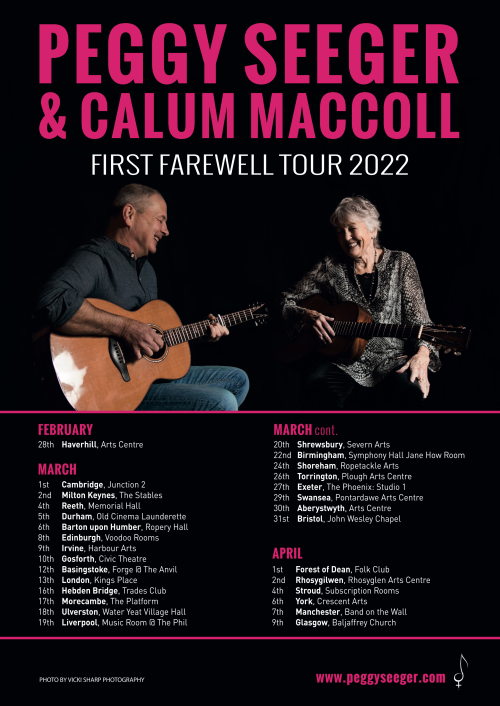 And as Peggy prepares, at 86, to embark on a nationwide tour - she says it may or may not be a farewell - the date that springs from the listings is not the first, Feb 28 at Haverhill Arts Centre in Suffolk, but March 5. It is a few days later when, with her son Calum as her tour-long accompanist, Peggy appears at the Old Cinema Launderette in Durham.

It was indeed once a cinema, the Crescent, opened in 1928 and housing up to 320 people. Later it became the Rex. The last film shown there was Eagle Squadron in 1958. 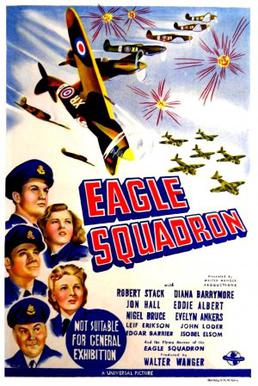 Wikipedia: 'Fair use .. the cover art can or could be obtained from the distributor'

Nine years ago, it was transformed into a music venue inside a working launderette, the daytime coffee bar adding to its uses. The capacity is just 55 but artists accustomed to far bigger audiences enjoy the novelty and intimacy of performing there. Ask the Unthanks, Tom Robinson , Martin Carthy O'Hooley and Tidow and more.

Richard Turner, co-owner and curator of events, is keen to point out that it is not a folk venue. What he terms "non-folk/acoustic type artists" also play there and he cites Martin Stephenson as well as Otway and Barrett as regulars. 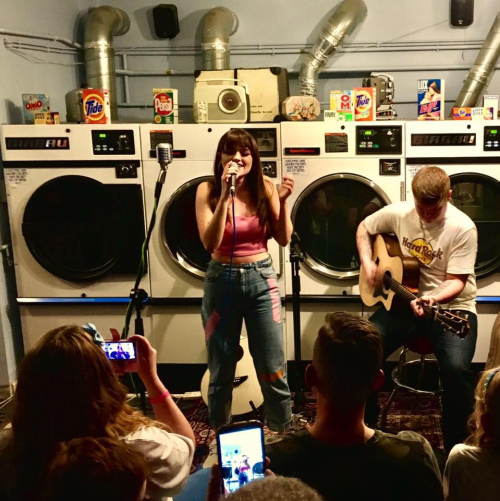 But back to Peggy, who perhaps needs to know that Sunderland are not at home the day she's in Durham so I cannot usefully suggest a short diversion via the Stadium of Light.

She is, as everyone should know, the sister of the late US folk legend, Pete Seeger, and widow of Ewan MacColl, a pivotal giant of the folk music of the British Isles and the writer of so many wonderful songs that it would be difficult to know where to start unless you chose to do with The First Time Ever I Saw Your Face, written with Peggy in mind in 1957 and a serious earner after Roberta Flack turned it into a Grammy-winning smash hit 15 years later.

But Peggy Seeger is also a hugely admired artist. For Mojo Magazine her album First Farewell, which I shall listen and return to, is the folk record of 2021. the 29-date tour takes the same name .

First Farewell is an odd title for a CD or a tour, but it looks both forward and back as I have tried to do in my life.

I have toured all over the globe since I was 20 and it is always a delight, a new adventure.

I am an activist, an advocate, a left-winger, an eco-feminist, a singer of traditional and topical songs, trying to speak in my own way for my own time.

This may be the last time, but then again it may not ….

Peggy has recorded 26 solo albums and more the 100 collaborative albums, naturally including her work with Ewan. She has collected a number of awards, including the Association of Independent Music (AIM) Women in Music as Most Inspirational Artist, the Folk Alliance International’s Lifetime Achievement and the BBC Radio 2’s Folk Awards Song of the Year.

You don't have to have washing to do in Durham in March. Check out the dates. There are plenty to choose from and one of them may be somewhere near you. And as I said to Peggy's publicist, my friend Harriet Simms, who heartily agreed: "What a remarkable woman."