December 2021: season two of Music from North Eastern England had its origins in this post from Bill Taylor, published in August. Now that I have reposted, with minor updates, all seven instalments of the original series, it is time to start thinking about how to follow Bill's piece. I already have some ideas and the second item in the resumed project will appear as soon as I can get round to it.

One of the most popular series to appear at Salut! Live featured the songs and music of North-eastern England. It stretched to seven instalments but it was clear to me that there was scope for more. Bill Taylor, who like me grew up in the region and unlike me was born there, effectively reopens the series, or launches a second season, with these reflections on a song whose original tune appears, on the basis of his researches, to have become a mystery. Can someone come up with information that challenges that assumption? We'll see ...

His name was Geordie Black and he was getting very old. Happens to the best of us.

But hardly any of us have a song written about our lives. If we did, would it be a sad song or a happy one?

Geordie Black has been interpreted both ways. Hard to say for sure which is more authentic. 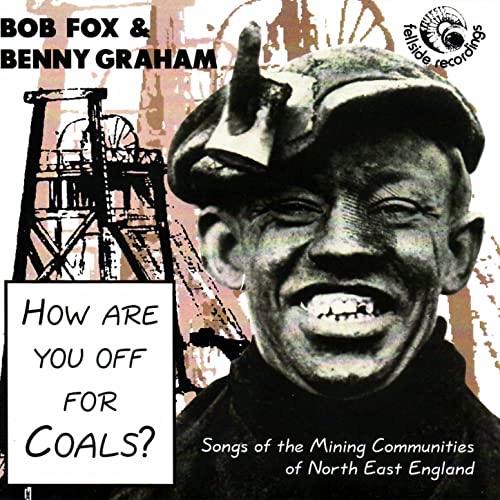 From the wonderful repertoire of Bob Fox and Benny Graham, with Benny taking lead vocals on this track: available here

I first heard the song on the Ian Campbell Folk Group’s 1965 album Coaldust Ballads, a medium-paced tune with a rather sober, contemplative
vocal. Quite appropriate when you listen to some of the lyrics.

But is it the correct tune? If so, that would be an immense coincidence because it’s certainly not the original melody.

On stage he would dress up as the old coalminer, who recounts his long, hard life in the pits, starting as a child. Harrison also ran a pub for a while in
Gateshead, called the Geordy Black.

Unlike some of his contemporaries, he didn’t just write new words to old tunes. He composed his own music, though he doesn’t seem to have kept
copies of it.

As Ian Campbell wrote on the Coaldust Ballads album sleeve notes: “Like many of the songs in (A L Lloyd’s) Come All Ye Bold Miners, this had
no tune supplied… we were unable to find the associated tune from any other source and found it necessary to supply our own.

“Dave Swarbrick came to our aid with a fragment of a half-remembered strathspey, of which he was unable to recall the name, and I played around with it until it fitted the words. On this track, Dave is playing the 12-stringed guitar. He is a useful lad to have around.”

Well, yes, Swarb always was. And all credit to him and Campbell for creating a quite lovely version of the song.

I only knew this and one other, quite different, interpretation of Geordie Black, done by the High Level Ranters. I haven’t been able to dig up a link to that one, which is on their 1970 Keep Your Feet Still Geordie Hinnie and 1987 Gateshead Revisited albums.

But I did pin down other versions. Sadly, I can’t find a link either to one from as far away as Australia where in 2016 Duncan Brown and Danny
Spooner included it on their album Labour and Toil: Songs of the Working Life.

No clue to the correct music there, though – Brown noted that he learned the song from the Ian Campbell Folk Group album.

There’s a nice version done by a group called The Wayfarers. I had trouble finding information on them. But I’m pretty sure they were also known as the Ripley Wayfarers and apparently recorded several albums (including the wonderfully titled Chips and Brown Sauce) under both names.

It’s a nice, simple rendition with some good fiddling. But, again, it’s the Campbell/Swarbrick tune.

The 1974 album Bits and Pieces of Brian Dewhurst also has another good, straightforward version. Quite similar to the Wayfarers.

I’m rather out of touch with the folk scene these days, so I’m not familiar with this singer, who died in 2019 and was better known as Brian Preston (Dewhurst was his family name). But I really like his voice.

Then we come to my new favourite version of Geordie Black. I’ve seen Ray Stubbs, another native of Gateshead. billed as Europe’s biggest one-man band, playing 17 instruments. Best-known now, I believe, as an R&amp;B artist, Stubbs in the early ’70s put together an acoustic blues and folk trio called Pigmeat. I was very much on the scene in those days but, again, I don’t remember them.

On the 2002 compilation album The Bonny Gateshead Lass, Stubbs – backed by, among others, Mick and Kevin Doonan of the Mighty Doonans
– picks up where Campbell and Swarbrick left off and takes the bare bonesof their creation to another dimension. Flesh is added with a wailing harmonica, twangy electric guitar and pounding percussion. As might be expected of anything including a Doonan or two, it’s quite compelling.

Which brings us to Bob Fox and Benny Graham on their 1996 album How Are You Off For Coals. Fox, born in Seaham, was formerly part of a
very successful duo with Hedgehog Pie’s Stu Luckley, before going solo. I know less about Graham, except that he’s also a north-easterner and has
been a performer for decades.

Their version of Geordie Black, with a very simple guitar accompaniment, is light and altogether jaunty. Completely different to the
others I’ve found.

It’s similar in style, if not execution, to the High Level Ranters’ full-blooded interpretation, which was recorded before an audience at Balmbra’s
Music Hall in Newcastle (from where the “heavy laden” bus set off for Blaydon Races. Rowley Harrison very likely performed there.)

I haven’t heard the Ranters’ album in a long time but I remember Johnny Handle introducing Geordie Black as a light-hearted reminiscence
by an old miner.

One reference I found online said that Harrison wrote the song “in a style deriving from music hall”. So the lively, cheerful treatment may be
closer to the original than the more dour version.

I dunno, though. Consider some of the words:

Noo, when aa wes just a lad carried on me faither’s back
Away he wad tak’ me to the pit.
An’ to get in the cage an’ to gan doon belaw
Twas enough to mak a youngster tak a fit.
For to sit an’ keep a door midst the darkness an’ the gloom
Aye, aa’d mony a lonely ’oor by messel’…”
Now, because “the maister has nee pity on auld bones”, Geordie ekes
out a living “on the bank… amang the bits o’ lads wi’ pickin’ oot the
stones.

Not exactly a barrel of laughs. Still, perhaps that was all the more reason to put a jovial spin on the words. Whistling past the graveyard… we’ve all done it.

I use the tune that I got from the version performed by The Elliotts of Birtley which I would think is the same as used by Benny (I'll have to listen later) Actually I am in South Shields for a couple of days and it is rumoured that the song was premiered in the town's Alhambra Music Hall.
Pigment were Ray Stubbs, Jim Murray and the late Ronnie (Sammy) Johnson and they were one of the resident groups at South Tyne Folk and Blues.