Christmas 2021 update:  looking for something with a Christmas feel, and intending to contribute to a seasonally themed series at the 60s 70s Folk Music Facebook group, I finally plumped for this. Paul Brady's unbeatable song of press gang thuggery and abduction, Arthur McBride, qualifies because the events described take place "on Christmas morning".

Salut! Live thanks the many new readers from around the British Isles, in the USA, in Canada and beyond who have made 2021 the best of our 13 years or so in terms of output and visitor number. And whether you are in Brexit-infested Britain or facing your own struggles on the other side of the Atlantic and around the world, a very merry Christmas and a happy new year to one and all ...  and keep safe in these challenging times

I first met Paul Brady when he was a member of the Johnstons and that memorable Irish band played at folk clubs I ran in Darlington and Bishop Auckland at the end of the 1960s or beginning of the 1970s. I do have some proof of dates but not where I am just now. 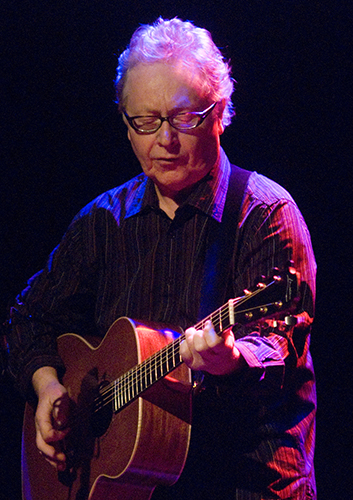 Roger Liptrot is a magnificent photographer of folk musicians. He kindly gives permission for his work to be reproduced here

Among distant memories, I recall booking the group through the BBC presenter and artists' agent Jim Lloyd for all of £40 plus "beer and petrol money". We bumped up the admission price to something equivalent to £13 a head at today's values and found them beds at my home and (for the Bishop gig) that of my friend and co-organiser, Phil Steele. Both evenings were musically sublime.

Since then, I have bumped into Brady in Donegal and lunched with him, rather grandly but at someone else's expense, in London. What follows concerns what many, including the actor Sir Mark Rylance when choosing his Desert Island Discs, have come to regard as his signature song ...

What to choose for the 50th edition of Cover Story, the modest Salut! Live series that draws attention to and comments on different versions of the same pieces of music. I have given it a lot of thought and, because it needs to be a song or tune that is special to me, I have decided it should be Arthur McBride, which describes an unsuccessful attempt at forced military enlistment and, in the right hands, is the most complete single performance known to me.

It will come as little surprise to regular readers that I judge those right hands to belong to Paul Brady; this link takes you to one of the other occasions I have written about his singing and exquisite playing of the song.

But for the purposes of making my choice fit the series, it was necessary to search for other interpretations in as great a spirit of objectivity as I could muster.

First the song. It appears to have been collected for the first time in Limerick around 1840. Since Queen Victoria was by then on the English throne, the line "and drink the king's health in the morning" and a mention of soldiers being sent to France shows that it either refers to Anglo-French conflict in a previous reign or is the product of an inventive storyteller's imagination, expressing a more general Irish resistance to fighting for the Crown.

As is the nature of folk songs, versions have been located in various locations around the British Isles and the first known "field" recording was by the American collector James Madison Carpenter (from a Scottish farmworker called Alex Campbell) between 1929 ands 1935.

Brady himself came across the song while staying with a friend, the musician Patrick Sky, in the US in 1972 and exploring an old book of songs compiled by the celebrated Nova Scotia singer Carrie Grover.

The lyrics were in rough and ready form and Brady indulged in what he calls some "word architecture" to create the song we know now.

He changed a reference to "burgoo" - an old American term for soup, porridge or "some sort of miserable auld thing," says Brady - to "thin gruel", the meagre diet available - according to the recruiting sergeant  - to young men foolish enough not to join the British army.

"That's how I know Bob Dylan heard my version," Brady, reveals in a useful clip about the song's development, "because he sings 'thin gruel', too, and I made that up!"

The lexical architecture worked a treat. Arthur McBride becomes a great tale and an even better song, combining social and military history (at least generally), Irish opposition to the Crown, rumbustious humour and sheer melodic power.

To my regret, Dylan's version appears to be unavailable on YouTube. I've heard it but so long ago that I cannot properly offer a comment.

But there are, of course, numerous other outings for the song to be found there and these range from worthy and better to quirky and worse.

I was interested to discover the live version of Chris Thile and Sarah Jarosz, respectively Californian and Texan singers and instrumentalists, recorded at the end of last year. I know a little of Jarosz's fine work and collaborations, less about Thile. But they make a compelling duo and are backed by some accomplished musicians.

This rendition is enjoyable but only up to a point; it feels a little disjointed at times and they do not quite to live up to the promise to tell the whole story - "mark what followed and what did betide" - by inexplicably dropping the denouement when our hero and the narrator, his cousin, rout the recruiting party of Sergeant Napper, Corporal Vamp and their "little wee drummer".

Brady was a member of the superb Planxty, more Irish supergroup than mere band, but not, if I am correct, when they recorded Arthur McBride in 1973.

The outstanding Andy Irvine takes the vocals and it gets close to the splendour of Brady without shaking my view that the latter, in 1977, offers the definitive version.

I shall leave readers to scour YouTube for others I ought to have mentioned but have overlooked for the sake of avoiding clutter.

Please to free to post links, in Comments below, to any that have made a particular impression on you. Suggestions for future Cover Story instalments are also welcome (you will find links to what has appeared so far of you scroll down the sidebar column to your right). Guest articles are positively encouraged. Maybe you have a video link to the Dylan's Arthur McBride. The series has been worthwhile and will continue. Whether any future discussion will ever match the interest attracted by the Richard Thompson classic Beeswing remains to be seen.

For once, no argument - Paul Brady's is the definitive version of the song, absolutely! And I, too, have fond memories of him being at the Aclet with the Johnstons. I happened upon him again at a folk festival in Port Fairy, Australia, in 2003 (my late friend Greg Quill and his songwriting partner Kerryn Tolhurst were playing). I didn't introduce myself ("Hi, we met once in Bishop Auckland about 32 years ago. What do you mean, you don't remember?") but I was delighted that he included Arthur McBride in his set. There are a number of recordings of him doing the song, some of them entitled Arthur McBride and the Sergeant.
I'm not crazy about Planxty's version; there's nothing distinctive about it. And I'm not at all sure why Chris Thyle and Sarah Jarosz even bothered. Both great musicians but they throw away this song.
I'm fond of Dylan's rendition and delighted to learn that he was influenced by Brady. It's available on Spotify.

(Via Facebook). Superb(e).
There’s one solo version online where he ends it with a winning, insolent smile.

Finally, Bob Dylan's version has shown up! It's lovely but Paul Brady still comes out ahead.
https://www.youtube.com/watch?v=j9K8OuhNsnc

Taking to Cameron Crowe in the booklet accompanying Biograph (1985), Dylan says, “Some guys got it down- Leonard Cohen, Paul Brady, Lou Reed, secret heroes, - John Prine, David Allan Coe, Tom Waits. I listen more to that kind of stuff than whatever is popular at the moment.”

I've always been puzzled by versions of this that take place on Christmas morning. The first time I heard the song, sung by one Doug DeNatale in North Carolina, probably in 1979, the action took place on "a fine summer's morning," which makes a lot more sense for a walk on the strand. I enjoyed hearing Jarosz and Thile, but, as you point out, they don't finish the song.