November 2021: while republishing this series - to general approval, judging by much higher than usual visitor numbers - it has occurred to me that the possibility of additional instalment/s I've contemplated and perhaps even mentioned should become a reality. I think I owe at least one more to readers who share my love of the music of North-Eastern England.
Will set to work on it but in the meantime, there are three more to go starting with the fourth that originally appeared a year ago ...

Heaven knows we all need cheering up. I hope the latest instalment of Music from the North East (which extends its geographical remit to include Eastern Canada) offers some respite from the stream of wretched news ...

For the fourth instalment of my series on the Music of North Eastern England, I turn again to the gifted singer-songwriter  Ed Pickford, of whom another of the artists I feature here, Tom McConville, has said "his songs just touch me straight to the heart". 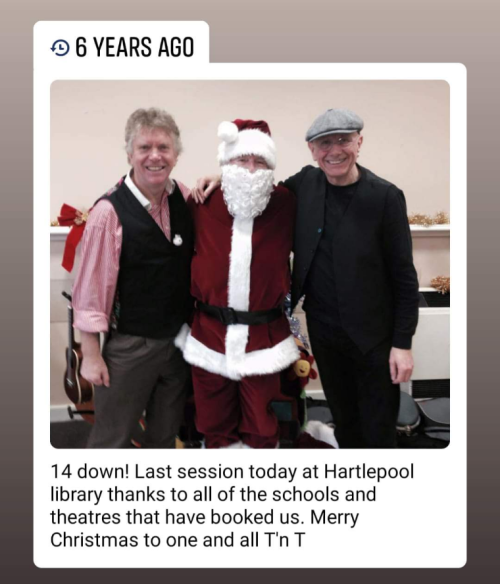 Tom McConville (right) with the musician/songwriter/storyteller  Tony Wilson, Ed Pickford says Tom has 'always been one of the nicest people, dedicated to music on the folk scene'.

Those of us who go back a long way with the music of the region and its folk clubs remember Ed as a tremendous solo performer and part of the "folk music hall" trio Northern Front.
Absences from the UK have made me slow, on occasion, to catch up with important news of the men and women who made the music. I was therefore deeply saddened to hear from Ed that his fellow-members Mick Elliott and Nick Fenwick have both died in recent years.
Ed sent me part of a BBC podcast in which Mike Harding, who like the Front skilfully combined music and humour, interviewed the "Newcastle Fiddle Player", Tom McConville, who has known Ed for many years and admires his work. Not all Ed's songs deal with the legacy of coal mining in the North East, but much of the best ones do just that.  Think Farewell Johnny Miner and Ee Aye Aa Could Hew.
One of tracks Mike played was Tom's singing of another great Pickford composition Strange Lover is the Coalmine which you can find here.
Ed is a champion of younger folk musicians and warmly praised a version of another of his sings, Pound a Week Rise, by Fialla, an Ohio trio. It appears early in this edition of Ken Hudson's podcast Roving Folk.

This series led Ed to send me some thoughts of his own in successive e-mails. Over to him:

That Salut! Live posting about folk music in the NE prompted to muse a little down memory lane.

Mick Elliott died a few years ago now and Nick about two years ago - and he was the youngest.

I was given a few Northern Front recordings - that I didn't know existed - from Radio Durham in about 1969 - by Nick's sister - after Nick died.

I suppose NE folk music has two roots - The High Level thanks to Johnny Handle & the then Louis Killen. That was a concert club but out of that sprang the Elliotts of Birtley Folk Club which was democratic & inclusive. On a personal note - I must have been about 19 in 1962 - one of the first songs I wrote to do there was Pound a Week Rise and Ewan MacColl took the words and sang it around [see above].

Amazingly now that song is still being recorded - now by very young folkies of great technical ability - latest one a group from Ohio called Fialla.

A lot of NE artists such as Bob Fox & Jez Lowe have exported the NE cultural past, as have many others.

With my Durham Big Meeting song, I did to counter the suggestion that it was one big booze-up. Its roots are different and still relevant today - see British Gas threatening to sack their workers if they did not sign a lesser contract.

Songs do surprise you though. Another long-forgotten song I did in the 60s called Devil is in the Dust was dug up and done brilliantly, again by very good young folkies, the Tweed Project.

I'll attach the Durham song here and a recent one one that has no audience whatever unless you are a Sunderland supporter and 75+ ... [to be continued].

.... In the 60s Mick & I were hitch-hiking in Germany and thumbing by the roadside I wrote a song called, Will I Ever See Blighty Again?. Same with Sunderland AFC  the Premier Legue.

I see you have Tom MacConville on your list. A few years ago in the Little Haven in South Shields, Tom told me a little story that to me exemplified the young folkie outlook's difference with the old folkie outlook (as represented by Hamish Imlach, where the world was one big party).

Tom said that he asked some folk degree students backstage at some folk club if they wanted to go into the room where people were singing and they said: "We're not on yet."

Here's Tom singing a song of mine that dates from when, as children, my cousin Louis & I in the 1940s would watch the miners ready to go down the pit in Herrington Burn as we played on the swings. This is a Mike Harding podcast.

Just listened to that for the first time in a long time and they don't play much of the song so here are the Barra MacNiels from Nova Scotia singing it. Herrington Burn to Nova Scotia - if it can happen it will happen.

But back to Tom McConville for one last clip, a set of tunes with friends, two of them younger musicians Ed would approve of ... and yes, there's more to come.

Posted at 08:45 AM in Music from North Eastern England | Permalink | Comments (4)

Amazing memories, amazing music. Very sorry to hear that Nick Fenwick and Mick Elliott are no longer with us. I'd love to hear those old Northern Front recordings.
There are a couple of versions of A Strange Lover is a Coalmine on Spotify, including one by the Barra MacNeils with Archie Fisher, a name I haven't heard in a long time. Also the live version that Ed has here. One by Jim Sharp from The Songs of Ed Pickford album (all of which is on Spotify) and a capella by Pegleg Ferret from The Hooky Mat Project album, featuring among others Marie Little and Ed himself.
The music lives and that's very good to know.

I don’t know any miner who wanted their son to go down the pit. I remember the miners' strike tearing families apart.

One funny incident. We used to ride our horses across to the blacksmith shop at Hetton to be shod.

Our route took us past the entrance to Hetton pit. Police, including mounted police were guarding the entrance, preventing the pickets getting too close. As we approached one of our horses took fright at all the noise and fuss and bolted, the others immediately followed, four of us in full gallop, out of control.

Straight through the police lines and into the pit yard. We got such a cheer from the lads on the picket line. Of course it was, in the end, just a token gesture and we were escorted to the smithy so the police could confirm that we were indeed booked in.

Another Ed Pickford song around that time that sticks in my mind is Seaham Harbour Bay. My mom wept when I got home from the folk club and sang it to her. (Of course that might have been a response to my singing).

I was sad to read on Colin Randall's internet site, Salut! Live, that Nick Fenwick had passed away about 2 years ago. Nick was well known in the north east as a member of Northern Front but I knew him from his performances in Birmingham folk clubs in the 1970s and also through teaching in local schools. Comedy was a key part of his solo act but he was a very fine singer and guitarist, at his best when performing traditional songs. Perhaps I have missed tributes to Nick, but I have not been able to find any. I am sure there will be mudcatters who remember Nick's performances either solo, or with Northern Front.