November 2021: the Salut! Live series on Music from North Eastern England ran over seven instalments starting around a year ago. It attracted a lot of interest and is doing so again as I reproduce those article with updates where necessary. Here is the third edition ...

First of all, I owe a big thank you to the many hundreds of people who, in many cases for the first time, have been visiting these pages this month, bringing Salut! Live the nearest thing to Sunlit Uplands we expect to see in Brexit Britain.

It began with Bill Taylor's Cover Story account of a young Bob Dylan's contribution to BBC drama. Largely forgotten more than half a century later,  there was Dylan involvement in a Sunday night play called Madhouse on Castle Street.  The director Philip Saville's original idea was for him to act. This not being to Dylan's taste, he sang instead, as Bill explains in his piece.

Bill's article was followed by a comparison of different versions of The Testimony of Patience Kershaw and the first two instalments of this series on the Music of North Eastern England. 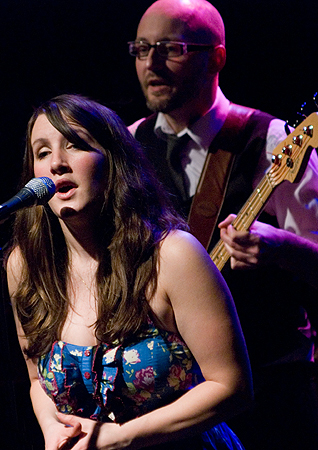 On one day, Dec 11, there were no fewer than 455 visits to Salut! Live, not a figure that would impress those who run properly successful websites but massive by our modest standards.

For the third instalment of the series, I have gone with what might be called a representational selection. I admire all the artists I feature, and like the choices I have made from their bodies of work, but I do not put any of it forward as the best they have done.

First the Unthanks.  I thought of presenting their rightly acclaimed Fareweel Regality and the excellent but very different original by its composer, the late Terry Conway.  But that belongs - and will eventually find its home - in Cover Story.

Here's the Tender Coming would have been another decent choice but I posted the Mighty Doonans' version earlier in the series so another outing for the same song might seem premature.

So  I came up with another cracker from Rachel, Becky and their band. Annachie Gordon was not an obvious inclusion in the Unthanks' repertoire, given the undeniably superb interpretations available from more conventionally accomplished singers including Mary Black, Sinead O'Connor and Loreena Mckennitt. Nic Jones also sang it to perfection but I take the unfashionable view that gender matters in song; it simply doesn't feel right for me, and never has felt right, to hear a woman's story told in the first person by a man, or vice versa.

Annachie Gordon is one of numerous ballads telling of the young woman who falls for a man of humble origins and resists her cruel and selfish father's will that she should instead marry a rich suitor. June Tabor once told me it was a song "without a wasted word"; I've done my share of editing  and wouldn't necessarily go that far but I know what she means and share her appreciation of the way the story unfolds.

Becky Unthank takes the lead vocals. Plenty of people will prefer the song on the lips of others but I find this an entirely compelling version, the clip of which I am belatedly adding.

My earlier mention of Brexit was not intended to annoy Ed Pickford, an outstanding songwriter with his heart in the right, by which I mean left, place on most important matters but not on Leave/Remain. It is only slightly reassuring to know this rotten project is not the exclusive preserve of the far right, conventional right or xenophobes (and worse) so I can respect Ed's view, which was after all shared - in whatever massaged form - by Jeremy Corbyn and his key advisers.

When it comes to Ed's songwriting, I have nothing but praise. He was an important part of the Northern Front, a trio - with Mick Elliott and Nick Fenwick - that combined humour and music in brilliant style and gave folk clubs like those I helped to run some of their best nights.

From a wealth of options, I was initially torn between two great coalfield songs of his, Farewell Johnny Miner and Ee Aye Aa Could Hew, but then decided to explore further. I do not suggest for a second that Durham Big Meeting - describing the annual Miners' Gala, an event my London-born parents never allowed me to attend when I was a lad in Co Durham -  is the finest song Ed has written and performed. It just seems to suit the series.

Similarly, the High Level Ranters did so much more, and in truth much better, than Byker Hill.

But hearing Tom Gilfellon belt out the vocals reminds me of 1) my earliest experiences of folk clubs, where the song was part of the staple diet 2) Tom's disdain, recently recalled by my friends Bill Taylor and Len Skelton,  for the offputting noisiness of our club's audience and 3) the stunning way I remember it being sung by Eileen, youngest sister of another pal, Mike Sheehan, when she cannot have been more than 13.

I believe this series still has legs, so there will be a fourth instalment in which you will encounter a Geordie fiddler, Tom McConville, Kathryn Tickell, the Fettlers of Teesside and others.

You live and learn... I never Ee Aye Ah Could Hew was written by Ed Pickford. It was your first instalment of Music from North Eastern England that introduced me to the Mighty Doonans and I found their version of the song on Spotify. Great stuff. As, I'm sure, is Ed's rendition. I well remember him as both a solo performer and with the Northern Front at the Aclet - amazing music and equally amazing humour. I can't think of a band that offered better value for your admission money. I also remember when I was M.C. at the Aclet, Messrs. Pickford, Fenwick and Elliott sitting at the back of the room and Ed heckling me. I had no choice but to fight back and I was in a total sweat trying to keep up with him. Alan Sims, who was there that night, will remember it, I'm sure.
I didn't realize either that Ed had written a Durham Big Meeting song. They only one I knew was Johnny Handle's Durham Big Meeting Day. Ed's is a good one but I think I prefer Johnny's. Not much to be said about his and the High Level Ranters' Byker Hill... rough-around-the-edges beauty.
I know you're probably waiting for me to announce one day that I don't like them but the Unthanks continue to amaze me. Becky Unthank's ethereal voice coils around the words to Annachie Gordon like smoke. Hard to imagine anyone doing it better.

Hi Bill. Plenty of memories there. I didn’t realise there was another Durham Big Meeting song but, like you, I’ve always liked the Johnny Handle one and still know all the words after all those years. I used to have a great photo of you, me and Alan Sims sitting on the road outside the Half Moon supping ale on Gala day. But don’t know where it is now. 😳 Let’s hope the 150th Big Meeting will be held in July. Maybe I’ll see you there? 🤞

Your mention of the sitting room at Welbeck Avenue, and continuation of singing after a Saturday night at the Liffey Club made me quite nostalgic, looking back, our next door neighbours Jack and Nessie must have been extremely tolerant.

I made my last appearance on stage 15 year ago, playing Dick Whittington in the village pantomime, unfortunately Byker Hill was not featured in the musical repertoire!!

Not only do I remember the night I have to say it was me who told you guys about Northern Front, after seeing them at The Three Tuns folk club in Birtley. A lively club run by the Elliott family. I still have a vinyl album of songs from Jack Elliott, including Rap Her To Bank. Good times. I was nervous in case you didn't like them cos it was the one and only bit of input I had to those wonderful Aclet nights. And, yeah, Bill I was sitting next to you during that verbal fencing ... so glad I wasn't involved. But you nailed it buddy.

Dave!! Hi! I have that photo on my laptop. I’ll send it to Colin in the hope he can pass it on to you. As for the anniversary gala in July... now there’s a thought...