November 2021 update: I was pleased with this series on the music of North-eastern England, my home territory, and with the strong response it prompted (a much greater volume of 'hits', for example, than a follow-up exercise looking at sounds from the West Country). I am reposting and, where necessary, updating or tidying up the series.

Christy Moore, who cut his teeth in the region after abandoning a dull bank job back in Kildare to become professional folk singer, mentioned the great Vin Garbutt in a recent interview.

Thoughts of Vin started the second instalment of the NE series and, writing this now, my own memory is stirred. I last saw him at a folk club in Downpatrick, while was in Northern Ireland on news-reporting duty, and cannot shake off the image of him raising a pint of Guinness (his third while on stage, if I remember correctly) and calling 'cheers!' to a warm and enthusiastic audience. I was with a journalistic confrere whose non-drinking wife drove us all, Vin included, back to Belfast afterwards. Cheers, Vin, for all you did and for the man you were...

When the Teesside troubadour Vin Garbutt was alive and in his prime, and again when he died at the age of 69 in 2017, I wrote that if the River Tees could sing, it would surely sound like him.

No discussion the music of the North East of England, where I was happy to grow up despite having been born far away, could be complete without admiring mention of Vin, whom I described in my tribute in these words:

'..it is with immense sadness that I record the passing of a man I regard as probably the best solo performer on the British folk circuit, Vin Garbutt.

Vin was a charming, funny, self-deprecating man but also a quite wonderful artist who could draw an audience into the palm of his hand with that roaring voice, exemplary stage presence and down-to-earth wit.' 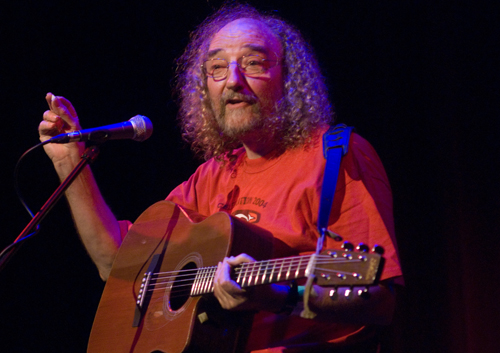 From an impossibly large repertoire, I have chosen one of the first songs he wrote, John North, because its theme - the "Land of Three Rivers", my Wear, his own Tees  and the Tyne - fits this series like a glove.

It also reminds me of how a mutual friend, Mike Amos, whose roles at the Northern Echo included writing that treasure of regional journalism, a diary column also called John North, recorded Vin's  passing.

The obituary appeared at Mike's own website Grass Routes and, from it, I take this pertinent and bleakly amusing anecdote in the safe knowledge that Vin would have been delighted to see it reprodced:

He’d had heart problems for years, told the Darlington folk club crowd [six months before his death] of an appointment with his consultant at the James Cook Hospital in Middlesbrough.

Vin went on to write even better songs than John North.

But for this, my second look at the music of my adopted region, I can think of no more obvious inclusion.

I was late to discover Jez Lowe, another compelling singer-songwriter (he summed up Vin as his "inspiration and friend").  Jez, who hails from Easington, is a seasoned and expert chronicler of life in the North East but I have decided to acknowledge that part of his work that had nothing to do with the region.

The Miami tells of one of the many hideously shocking events of the Troubles in Northern Ireland, the ambush of Ireland's popular Miami Showband by loyalist terrorists, with a strong whiff of suspicion that murky elements of British security forces were involved. Five people were murdered, three of them band members.

When I launched this series and mentioned it at the Facebook group, Folk Music Lovers International, Barbara Dean, from Great Barrington, Massachusetts, posted these words: "Jez is one of our all-time favorite singer-songwriters."

For Barbara, and anyone else who would like to know more about him, check out my recent interview and album review, starting here.

Back to the North East for musical choices, let me indulge a personal preference.

Bob Fox is an accomplished performer who excels live and, in happier pre-pandemic times, found his services in high demand at home and overseas.

With Stu Luckley, he formed one of the best English folk duos I have seen.

This version of Bonnie Gateshead Lass, a relic of the Tyneside music hall, is not the classic he recorded with Stu and takes precedence because of the superior quality of the recording. The song leads into a jaunty Northumbrian air, Elsie Marley, played superbly on guitar.

And finally, for this edition of the Music of North Eastern England, I have a promise to keep to the great Geordie band Lindisfarne.

The first part of the series included something of a novelty, a 48-year-old clip of them singing the old Newcastle Brown Ale TV jingle in a New York studio. That was actually a fine performance but I said I'd dig out a more substantial memory.

So here it is. Not Fog on the Tyne, nor Meet Me On the Corner or even We Can Swing Together but live, warts and all and with rousing audience participation, at the Newcastle City Hall in 1987, with Run for Home.

Next? We'll see. Maybe the Unthanks and Terry Conway again, The Fettlers, a Teesside band which I think Vin joined for a period, Kathryn Tickell and whatever else takes my fancy (and is relatively easy to locate).

My favourite Bob Fox story - he uses it in his performance - but I interviewed him at a festival and he told it then. When he first started doing the clubs it wasn't enough to make a full-time living so he got a HGV licence and worked as a lorry driver driving all over Britain.

Thanks, Dave. I heard a few stories from him when he did a little Sunderland AFC related interview years ago and that he'd been, as well as a lorry driver, a fence erector, financial adviser, children’s entertainer and double-glazing salesman ... https://safc.blog/give-us-a-song-bob/

Thanks, Dave. I heard a few when he did a little Sunderland AFC related interview years ago ... https://safc.blog/give-us-a-song-bob/

Of Lindisfarne, what more needs to be said? Pure magic. Or perhaps wonderfully impure.
Vin Garbutt had to be the only person who could turn the unlovely Teesside accent into something beautiful. He was a lovely man, too.
I'm not certain but I don't think I've ever seen Bob Fox perform. My loss.
As for Jez Lowe... I'm sorry, I just don't get him. I've tried, I've listened to quite a bit of his music. Leaves me cold.

I refuse to do a Dolores/O'Hooley & Tidow on you by reminding you of when you thought differently
about Jez Lowe!

I don't remember but I'll take your word for it. In my defence, I probably hadn't heard much of his music then, whenever it was. And, heresy though this may be, I used to be a big fan of Ralph McTell. Now I can hardly bear to listen to him.