September 2021 update: the piece you see below was written and published here 10 years ago, at the start of  Salut! Live's Song of the Day series. I stand by every word except that the Toulon tunnel is now open both ways - and traffic can still be a nightmare.

I have been thinking a lot lately about Steeleye Span, and how good they were. I'd go as far as to say they have given me some of the greatest musical pleasures of my life (Fairport, John Mayall, the Kinks, Richard and Linda Thompson, Christy Moore, Pentangle, Oysterband, Mary Black and the Chieftains are among others). This is another of Steeleye's classics ... 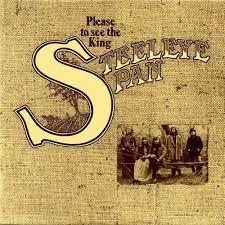 The road between Le Lavandou and La Seyne-sur-Mer is straightforward.

Finding the campsite where in-laws were staying in La Forêt de Janas was a little more complicated, enough to confuse my out-of-date SatNav on more than one occasion. But the twists and turns, and even the traffic jam coming back through Toulon (west-east, so no tunnel then), were made all the more bearable by reacquaintance with a few pearls from my vast garage collection of old CDs.

There was Martin Simpson live, ditto Nic Jones, a June Tabor compilation and some smooth blues from Josh White.

Nothing, however, quite matched a reissue of Steeleye Span's second album, Please To See The King, and nothing on it made me purr as loudly as did Bonnie Prince Charlie, a big, wonderfully melodic Scottish ballad given ultimate folk-rock treatment.

This is the album I first heard - and bought, unless memory is up to old tricks - in the record shop at Cecil Sharp House; it was a stunning, even life-changing experience for one accustomed to unaccompanied or sparsely accompanied traditional songs in northern folk clubs.

Of course, I had come across Maddy Prior and Tim Hart in such conventional acoustic settings, but their new band's fusion of English folk and amplified instruments had an instant impact that has endured for 40 years.

Please To See The King even made the 1971 album Top 50, briefly and low as far as the official listings went but as high as seventh in the choosier Melody Maker chart.

I wanted to add one of the bonus tracks of the re-issued album as a bonus of my own: the band's chaotic but irresistible cover, during a BBC studio session in 1971, of Chris Montez's 1962 hit Let's Dance. This sort of thing was an early Steeleye speciality: remember their versions of Rag Doll, To Know Him Is To Love Him and Rave On?

Sadly, I couldn't locate a clip of them doing Let's Dance. But see if you share my total adoration of Maddy's Bonnie Prince Charlie.

* I have added Please to See the King to my Amazon record shelf. Scroll down the list of album shown in the right-hand sidebar column or click here.