Sept 2021 update: how times have changed since this was first posted 10  years ago.

Times have changed further since a follow-up entry in the Salut! Live Cover Story series. Covid-19 cut off Flossie Malavialle's source of income in the UK and she returned to the south of France to pursue career paths far detached from music.

At Cover Story, my pal Bill Taylor put in a claim for Dave Van Ronk's version of the same Jacques Brel classic and also commended David Bowie's 1973 B-side to Sorrow. Scott Walker is reputed to have been first with an English translation (1967).

Brel wrote the song in 1964 but I have read that he did not especially rate it; it is one of three songs of his that cannot be be found in studio format. Me? Still rooting for Flossie ...

This is how I introduced Flossie Malavialle back in 2011 ... Meet Flossie, a French singer and teacher who has chosen to make her life in the North East of England. Like my own wife, also arriving in England from France, she chose to settle in Darlington. If that sounds an odd decision, think how Darling-to(w)n might translate into the language of Moliere.

I am sure it was Vin Garbutt, one of the region's - indeed one of Britain's - most accomplished folk performers, who first urged me to write about her. I have chosen a song in her native language, not La Vie En Rose or Je Ne Regrette Rien, though hers are versions I suspect even Edith Piaf's faithful would acknowledge as impressive, but the Belgian master Jacques Brel's Dans le Port d'Amsterdam, recorded live at the Mansfield folk club. It is a stunning rendition of a great song. Flossie also interprets traditional songs and the work of a wide range of English-language artists from Vin to Janis Joplin, Nat King Cole to Kris Kristofferson. Her strong, expressive voice fits them all like a glove and it my enduring ambition to see her sing live. One day surely. For further reading, please see the items published previously at Salut! and Salut! Live: 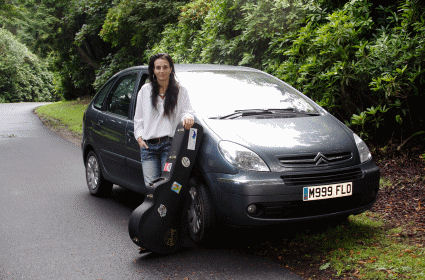 Odd - I was playing Van Ronk's and Bowie's versions of this just last night. And they're still the pick of the bunch for my money. I don't see (hear) much that's particularly special about Flossie Malavialle's interpretation. It's not bad but she doesn't bring anything new to the song.