Dipping into the Past: John Mayall, Eric Clapton and Rambling on My Mind

Jan 2021 update: the reason I am promoting archived material is that when it first appeared, Salut! Live had a pitifully small readership. It's not huge now but is a good deal larger and I believe there is content that is worth another airing.

When I used an office gym, I noticed that music was not a great way to get me through the monotony of exercise.

Listening at the same time could even put me off a much-loved album. One exception was my CD of the old John Mayall and the Bluesbreakers LP.

There are one or two tracks that leave me cold but it is generally an album of the highest quality and holds enduring appeal. Here is how I described it for my original Song of the Day series back in 2011 ...

BUT: I now know something I didn’t before: the odiously far-right views Clapton has voiced on race, and his rantings on Covid (thoughts that would alarm most  scientists). I may find it harder to listen to his music in future …

What do you make of it so far? I am quite enjoying this series, picking a clip each day - as I will for as long as I can keep it going - to share the bits and pieces of music I regard as special.

We've had the Unthanks, Dessie O'Halloran with Sharon Shannon, Joan Baez, Steeleye Span and the Dubliners. Not a bad start - and you can see the full series by clicking here - but now it is time for something different.

As I have written here and elsewhere, my route to folk music was via American protest singers and the blues.

To find imitations of either genre being performed live back in the 1960s in northern England, your best chance was probably a folk club.

In my case, it could so easily have put me off the music I was looking for, so grim were some of the imitations I encountered (and I emphatically include my own later efforts as I grappled with elementary chords on my first guitar).

But it also opened my eyes and ears to the unexpected pleasures of traditional song and music, mostly from around the UK and Ireland.

I never lost my love of the blues. I attended the American Folk Blues concerts when they reached the North East and marvelled at those old men, Sonny Terry and Brownie McGhee among them, as they walked, limped or were helped on stage to offer us the real thing, Mississsippi style.

But I never apologised for also liking the pacier, louder and amplified Chicago blues scene or, indeed, the work of pale-skinned Brits like John Mayall.

Long before he was a world celebrity, Eric Clapton was the lead guitarist for Mayall (the Yardbirds, Cream and Blind Faith came later).

We knew he was a cut above the rest, and we generally assumed he knew it too. God was his nickname, and that didn't seem to bother him too much either.

For something a little different, see this account of an open-air concert by a much later line-up of the band: https://www.francesalut.com/2007/07/john-mayall-bea.html

But two tracks in particular, one after the other, served as my "lying on the floor" music.

On my old record player, bought on hire puchase with the deposit coming from my first pay packet, I would turn up the volume as high as it would go, lie down with an ear close to the sound output (nothing as grand as speakers) and be entranced.

The first of those two tracks was Have You Heard?, a sublime Clapton solo punctuating Mayall's vocals. The next, Ramblin' On My Mind, written by Robert Johnson and first recorded by him in 1936, gave Clapton his first singing role on disc and it was a quite stunning musical experience for the spotty, prostrate teenager.

It had a classy guitar introduction and another great mid-song solo. I loved it then and I love it still.

Now, looking at the clip above, let us see how well this live version from 1983 has withstood the test of time ... 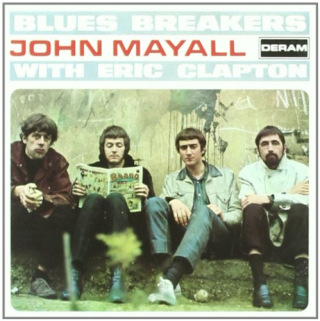 * Use the Salut! Live Amazon link to buy this and other music discussed on these pages: https://www.amazon.co.uk/exec/obidos/ASIN/B0000249ZZ/salusund-21

Posted at 12:00 PM in Dipping into the past, Eric Clapton, John Mayall, Song of the Day | Permalink | Comments (5)

Your comments take me back to the days of the 'Beano' album, Dansette record players and seeing Mayall and Clapton live in 1964 when I was in univeristy in Aberystwyth.

I think the American Folk Blues concert I went to was 1967 in October or November at Newcastle - Sonny Terry & Brownie McGhee - Son House was helped on stage and onto a stool - Bukka White - Little Walter - an amazing night - we were lucky to see them while still alive - Son House, like Sleepy John Estes, was living in obscurity until brought to Europe to enjoy a revival - I think I must have blotted the Chicago Blues players there that night from my memory - like the night we saw Alexis Korner and Jesse Fuller - can't remember anything that Blues Incorporated played but every song from Jesse Fuller - the memory plays tricks when you are old

Believe it or not I saw Sonny Terry and Brownie McGhee at The Top Hat, Spennymoor in the early 70s!

I’m sure I saw them at the Civic in Darlington. Probably with Mr Skelton (comment above)
But John Mayall was a live treat I’d wait about 40 years for after the Beano album. I saw them open air in a French resort with Bud Whittington the latest in a long line of outstanding lead guitarists