Song of the Day Revisited: on learning to love Oysterband and putting out lights

August 2021 update: I was slow to appreciate Oysterband.

When I reflect on an outlook on life that has known nuances  but no radical change,it is difficult to understand why I was resistant for so long.

Yes, I was working for a Conservative newspaper but so were many others who had similar views and, in those days (unlike now, I am sure), I found the cohabitation for the most part intellectually  unchallenging.

Reporters and subs broadly left the politics to the right-wing 'thinkers' who produced editorials and comment pieces. We got on with trying our best to report the news fully and fairly, an objective that nowadays seems almost quaint.

That said, I came to declare my revisionist admiration for the band and have never regretted doing so.

What follows originally appeared a few years ago and tells something of the story of a musical and philosophical conversion ....and as a bonus I have added Night Comes In, from the Freedom and Rain album with June Tabor that shook me out of denial . 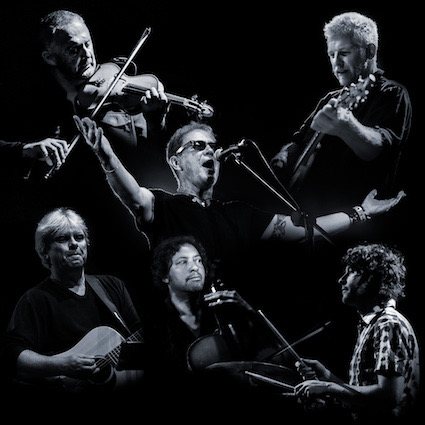 From Roger Liptrot's folkimages site and reproduced with his kind persion. Collage by Volker Neumann

From 2014: The Song of the Day series stumbles back into life, maybe for the only time before next week.

But oysters are such a vital part of the festivities in France, where I am spending Christmas, that this was irresistible, though it has to be said that I much prefer Oysterband to les huitres.

There was a night in London when we were to hear from both Dervish, the exciting Irish band led by Cathy Jordan, and Oysterband. A juxtaposition to make being a music-lover worthwhile.

As gig experiences go, this was as good a double bill as you were likely to find.

And there was respect between fellow-professionals; I stood with Cathy and the boys from her band as the Oysters were about to start and she told me how excited she was to be catching them live for the first time.

They did not let anyone down. Promoters were fond, in the 1990s and early 2000s, of quoting a line in which my reference in a Daily Telegraph preview listing - "No other folk rock band has the magneticism and verve of the Oysters live" - was followed by the words, added if I am right by the exemplary folk publicist John Crosby: "And he was right."

That was my view then, and it remains my view having seen the Oysters several times since, on stages biggish and small.

I did not always appreciate them. I freely admit to having gone through a phase, probably at the back end of the 1980s when feeling exasperated by the ineffectual responses of Labour to a rotten Tory government, of disliking overtly political music.

There was a right-on aspect to folk I found irritating, and the Oysters seemed to be part of it.

Then came Freedom and Rain, their collaboration with June Tabor. I was utterly hooked and proceeded to enter the most revisionist period of my life, replacing that earlier scepticism and disdain with genuine admiration.

The back catalogue was dipped into with relish; much later, I laughed out loud, amused but also in my tepid brand of solidarity, when they wrote after Tony Blair had finally displaced the Conservatives: "We voted Labour but didn't inhale."

The disinclination to inhale was fully justified by later events.

This may not be the finest example of the Oysters live. It is taken from the band's 30th anniversary tour in 2010, a night at the Showplace Performance Centre in Peterborough, Ontario, and captures not only John Jones's fine lead vocals but the less than fine efforts of spectators to sing along.

But Put Out The Lights reminds me of my conversion. It also brings back memories of my younger daughter discovering for once, in dad's record collection, something she was close to liking (later, she genuinely took to This Is The Voice in a big way).

It is also a great song, performed here unplugged, and I think this is an obscure enough clip, seen so far by not many more than 2,000 YouTube visitors - thanks "mchenwears" - to warrant inclusion in my Song of the Day series.

I hinted earlier at mutual respect between Dervish and Oysterband, and it is my belief that John Jones and his colleagues thought highly of Cathy's band, too. I meant to ask him about that night when he invited me to join him for one or more section of his hike-from-gig-to-gig treks during a solo tour a couple of years ago. Assuming, of course, that I could have kept up with such an experienced walker.

Sadly, for me (if not for my legs) the commissioning editor who liked the idea of me writing about the expedition could not get higher-up approval for the cost of getting me there from France. I should have stumped up and gone anyway. 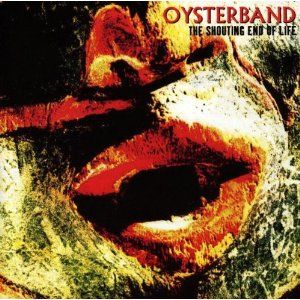 * Find Put Out The Lights on the Oysterband's superb album The Shouting End of Life at this Salut! Live Amazon link

Tags: John Jones, Oysterband, Put Out the Lights, Song of the Day, the Shouting End of Life