Home Archives Profile Subscribe
Two cheers or three? Spiers and Boden back. Bellowhead sort of back
Song of the Day Revisited: on learning to love Oysterband and putting out lights

August 2021 update: here is another look at and listen to a magnificent song from the pen of the prolific Pitman's Poet Tommy Armstrong as recorded, in 1975 I think, by the High Level Ranters ...

Let's take the Song of the Day Revisited series right back to where it all started for me.

I grew up in thew North East and it was through the music of the region that I first gained an appreciation of folk. I'd gone to a folk club in search of hearing some Dylan or blues; I found a little of that but much more of the songs evoking the workplace tribulations and everyday lives of working people, especially miners.

This is how I introduced my choice from the High Level Ranters' rich repertoire when Song of the Day first ran at Salut! Live in 2011 ...

The High Level Ranters were the earliest folk supergroup known to me.

Each member was well-known and successful, in as much as folk singers and musicians can be, in solo work or for other music-related activities, and when they came together it was considered something special.

And, for a small folk club like those I ran, probably out of reach, though I booked individual members often enough.

The line-up at the time I am thinking of was Alistair Anderson, Tommy Gilfellon, Johnny Handle, and Colin Ross. Forster Charlton, John Doonan (from the Doonan Family Band, featured here yesterday), Pete Wood, and Louis Killen also appeared in the band at different times with a trio - Handle, Ross and Jim Hall - being the most recent formation.

This is a classic Ranters track, their version of the pitman poet Tommy Armstrong's account of the strikebreaking tactics deployed by coal-owners during a dispute at the South Medomsley pit, near Consett.

The music hall jauntiness and semi-humorous (in a dark way) lyrics disguise the seriousness of the subject; miners were in constant struggle with management and up against powerful forces however compelling their grievances on pay and conditions.

The Tommy Armstrong Society notes that The South Medomsley Strike is regarded "in many folk circles as the greatest mining song ever written". 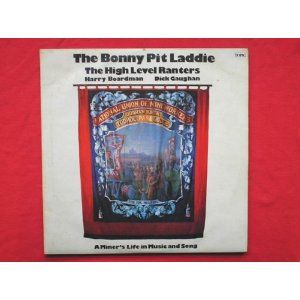 * Read more about the song and Tommy work's here and buy albums by the Ranters at this Salut! Live Amazon link.