Nanci Griffith. A song a day: (4) Little Love Affairs with the Chieftains

"She wrote the soundtrack of my life," said Cyndi Fish Wetmiller, a Nanci Griffith fan from Pennsylvania, at a Facebook page devoted to the Texan singer-songwriter's fabulous body of work. That is a delightful tribute and we shall be hearing more from Cyndi before this series comes to a close.

For now, on day four of Salut! Live's own week of honouring Nanci, we turn to the Irish music in which she found inspiration. 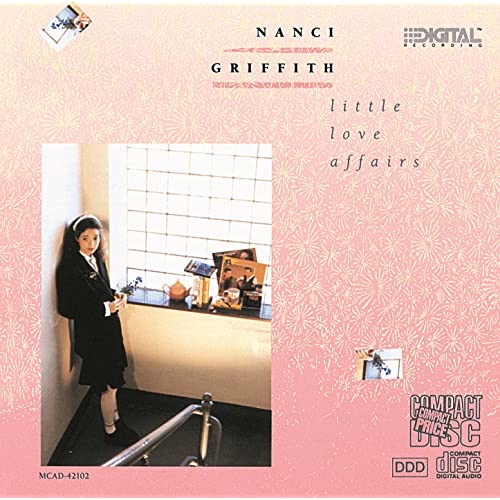 This is the original Nanci album including the featured song. So no Chieftains. Buy it at the Salut! Live Amazon link by clicking this caption

I first considered a beautiful rendition of Red is the Rose with the Chieftains, performed during "An Irish Evening" at the Grand Opera House in Belfast on 1992.

But I was petulantly put off by the presence on the bill, his name above Nanci's, of one Roger Daltrey, whose muddled "let's-acclaim-Brexit-except-when-it-screws-UK-touring-musicians" approach to political analysis is unwelcome here. Nanci and the audience are blameless in this respect since the concert was held when Brexit was no more than a far right or Little Engerlander notion and Northern Ireland would, in any case, eventually vote Remain.

So I chose instead another 1992 performance, the gorgeous Little Love Affairs which she co-wrote with James Hooker but here on the Tonight Show with Jay Leno with the sumptuous virtuosity of Paddy Moloney and his colleagues, sounds like a dreamy Irish ballad. I hope you enjoy it.

p> * For other items in this mini-series, and further tributes to Nanci Griffith, please go to this link.

"Little Love Affairs" is one of those quietly perfect songs that sidle up to you and sweep you off your feet. You hear it the first time and think, "That's nice." Then you hear it again and think, "No, that's great."
Tune, lyrics, voice, mood... there's not a single misstep. Along with "Ford Econoline" - which is perfect in an altogether different way - it's my favourite Nanci Griffith song.
"Does it make you hear songs on the radio?" Yes, it does.