Home Archives Profile Subscribe
Song of the Day: Albion Band ... The Gresford Disaster
Nanci Griffith. A song a day: (3) The Wing and the Wheel

Apologies for the absence earlier of the clip of 1952 Vincent Black Lightning. It had somehow ridden away but has now roared back to this post.

Collaboration is not the dirty word in music that it is in wartime.

In their thirst for broad and varying expression, performers of the highest quality seek out kindred spirits to sing or play with. For the second of Salut! Live's short season of tributes to Nanci Griffith, who died last Friday aged 68, I have chosen not one "song of the day" but two, both featuring work with Richard Thompson ...

We start with a somewhat unusual choice of an example of Nanci Griffith's work.

She barely sings a word as Thompson - having called her on stage as "a good friend and wonderful performer" - rattles through his outstanding song, a love story that evokes the allure of the motorcycle that fascinated him as a boy.

But what Nanci does offer is an ethereal effect that adds a powerfully eerie dimension and, as Ann Butler indicates, commenting at YouTube (below), may well have summoned echoes of the motorbike tragedy from her own life - the death of her boyfriend, John, who crashed after taking her to the high school senior prom. 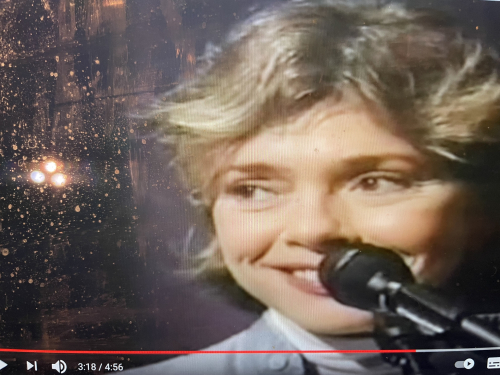 Ann Butler: I have this program [Sessions at West 54th] recorded on VHS tape. The VHS player hasn't been hooked up for years, so thank you "hclee" for uploading it. I love this version, most especially Nanci's ghostly whispers. And that brilliant smile part way through. Given Nanci's own experience with tragic motorcycle deaths, I can help think she's reliving some of her own past part way through.

My thanks one again to Bill Taylor, who alerted me to this off-piste representation of Nanci's artistry.

No strict need for consolation but this fits like a glove.

Thank you Peter Obermark, for the introduction to another Griffith-Thompson pairing where Nanci is heard rather more fully, with a charming spoken introduction to bring Richard on stage during a US television show before their full-throated duet on another of his classics, Wall of Death ... " an amazing and surprising collaboration,' says one YouTube viewer, Jeffrey Day.

* For other items in this mini-series, and further tributes to Nanci Griffith, please go to this link.

Not sure what's happening but I'm not seeing an accessible link to Vincent Black Lightning...
The first time I heard it was the live recording with Nanci Griffith and I find it hard now to listen to other versions - I want that extra dimension she brings to it. She takes an extremely good song and turns it into pure magic; I still don't quite comprehend how she knew what wordless sounds to make and where to make them. It's become one of my all-time favourites.
What strikes me about this wonderful rendition of Wall of Death is how clearly she's enjoying herself. There's a delight in the song and the music and the presence of Richard Thompson. Comparisons are odious but it's worth contrasting with Richard and Linda's original...

I was at that show. Nancy was wonderful! And how not to use that line: "Richard is a genre all by himself..."..perfect!

An interesting collaboration, surprised me a bit. I expected her to harmonize on some key lines, at least--as the song has no chorus. But she provided drone notes instead. Sounded nice and at first I didn't know what I was hearing, I looked for cellos/strings behind them, but no.