Song of the Day: Joan Baez interprets Dylan as only she can ... Don't Think Twice It's All Right

June 2021: not really an update. I have been too busy planning and effecting my escape from fortress Britain to France to spend much time on updating Salut! Live. So a simple reminder of a contentious preference, published 10 years after it first appeared here.

The Bob Dylan and Joan Baez Facebook groups are full of interesting contributions but the members of both can be absolute in their tastes: Dylan is a great writer but cannot sing, says one side. Baez's voice is just wrong, too pure, for this or that Dylan song, insists the other. Take your pick or, like me, judge selectively (and of course subjectively).

In the year when both of these exceptional artists have had their 80th birthdays, I will offer links below to some of the highlights that have graced our pages ... 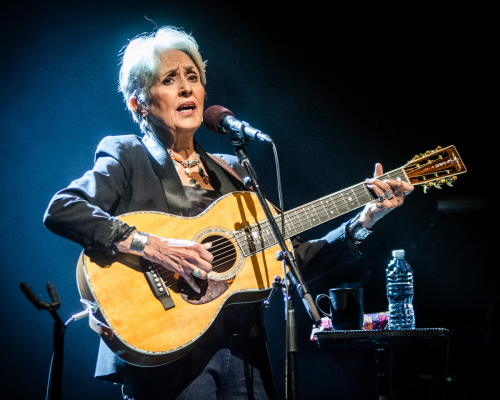 I may be on autodrive at the start of this little series.

Rest assured it won't last. But while I am thus engaged, the songs will come thick and fast. Then, it is fair to assume, it will become occasional rather than daily.

But I never lost sleep over the purity or otherwise of his career choices.

How could I object to him plugging in when I was drooling over Steeleye Span and Fairport Convention? Indeed, I was the proud owner of the Blonde on Blonde double album until a pressing financial need forced me to sell it to a colleague for ten bob (50p).

But from soon after that period, I found I no longer cared for much of what Dylan was doing; my problem, not his.

What I did always think, and still think now, is that a lot of his songs sounded better when interpreted by others.

He has never been a great singer; that is not what Dylan was about. Often, this didn't matter, but I do feel some of his compositions have inspired others to find ways of improving them. It is a subjective judgement and also highly selective; for example, I prefer the Stones' version of Like a Rolling Stone, but believe no one has bettered Dylan's own Mr Tambourine Man or The Times They Are a-Changing.

Joan Baez is a glorious singer. When the author of a YouTube comment described her work as "not music but magic", he or she had in mind my choice for today's song.

Her voice, even as it has undergone change as she has aged, suits it to perfection, as it did other items of early Dylan, and I was disappointed that it formed no part of her playlist when I saw her recently in concert in Marseille. Perhaps you will disagree ...

Dylan at 80 - a comprehensive series of reminiscence and assessment - all items found at https://www.salutlive.com/dylan-at-80/

* Don't Think Twice It's All Right appears on a few albums, if perhaps fewer than I'd thought. Explore my Amazon record shelf by clicking on this link taking you to one example or scrolling down the list of albums in the right-hand sidebar.

The Baez version: Don't Think Twice It's All Wrong

I love Joan Baez's voice on this (and pretty much everything else), but the thing I most loved about Dylan's voice on the original was the "conversational" feel of his phrasing--as he was singing, it really did feel that he was having this final soliloquy with the unnamed lover.

Via Facebook
She has a lovely voice, no doubt. But IMHO (please don’t take this the wrong way) she has a tendency to make a song too much about her rather than about the song. She appears to be a little bit of a grandstander. She holds the notes, she smiles and shows her pleasure with (and therefore encourages) any audience reaction to it. I saw a video (probably on this site) where she was singing the Boxer with Paul Simon. And she’s waving her arms around smiling and taking in the accolades upstaging Simon on his own song.
I don’t know anything about her but just from her body language she seems like someone who might be a bit difficult to get along with.
You know what? I’ll look for a bio about her and read it soon. Maybe she’s a really nice person and I just don’t go for the vocal demonstrations every time I hear her. I’ll report back. I promise.

Howard: an interesting thought that’s never occurred to me. I do seem to remember Mary Black holding her own, at the very least, in duet with Joan on Ring Them Bells. Neither seemed in competition.

I prefer Dylan’s songs when performed by other people for the most part, as well, Colin Randall, so I’ll join you in the doghouse on this one.
I think Dylan is a great songwriter, but for the most part, his voice is harsh and he often mumbles the words so you can’t really understand or appreciate the lyrics until you see them printed somewhere. There are occasional exceptions, where that style somehow enhances the song, or where he’s in a different frame of mind and has chosen to soften his vocal or enunciate more clearly.
Two that come to mind in which his delivery appeals to me are “You Gotta Serve Someone” and “If You See Her Say Hello”.
Having said that, I also agree with Howard Brodbeck, regarding Joan Baez. He’s really put his finger on something that’s always sort of reduced her performance to my way of thinking. Even though she’s been an influence on generations of singers. Having said that, there’s Joan’s Diamond’s and Rust, and NOBODY can touch that one as far as I’m concerned.