Home Archives Profile Subscribe
Cover Story: (40) Like a Rolling Stone. Bob Dylan, the Rolling Stones or Hendrix
Song of the Day Revisited: Luke Kelly ... The Town I Loved So Well

June 2021 update: just over five years ago the wonderful musician Dave Swarbrick left us. As I explain below, I have particular reasons to remember Swarb, his battles with ill-health and the passion for music that remained with him to the end.

And I feel it appropriate to share with Salut! Live's many new or newish readers the story of a choice for the site's Song of the Day series that was made not be me, the editor, but the performer .....

Because Salut! Live was created as long ago as 2007 and has occasional periods of regular updating, the archive is formidable. With a little effort, whether on laptop, phone or other online device, you can navigate the site and explore what I hope is a treasure chest of material about music, mostly folk but more besides.

This is not the first time I have updated a piece on an entry in my Song of the Day series that was chosen, at my invitation, by the artist himself.

Dave Swarbrick was alive for two of those updates but died on June 3 2016. He was 75 and the wonders of medical care had given him many additional years of life after serious illness (and that infamous premature obituary in The Daily Telegraph).

So please bear in mind that the following article was written before that unhappy event.

Also, not all links will necessarily work as they did back then - the Telegraph, for example, has retreated behind a paywall (prison might be a more appropriate place but that's just bitter old me talking) and is now either charging for a peep at my old blog or has swept it without mercy from its site ...

This item was published in 2014 during the return of the 2011 Song of the Day series. The fact that the performer, Swarb selected the entry makes it unique.

Writing a few years before he died, I said: "I am just chuffed to bits that a man who 10 years ago seemed at death's door, unsure whether he would be deemed fit enough for the major life-saving surgery he needed, made a good recovery and remains a force to be reckoned with, combative in his pronouncements at Facebook and active on stage..."

AND this is how I presented Swarb's 2011 role in Song of the Day. Remember as you read that it was written when he was alive and reasonably well ...

Reading a thread at Facebook about Dave Swarbrick's new project, re-mastering a Fairport Convention album covering the 1976/79 era and due for release next year, I wondered how I could squeeze him into the closing stages of the series.

No apologies for another outing for Fairport, a band of towering significance in the history of folk-rock, and I will not even promise that this will be the last.

But since no single song stood out for me among many contenders, I invited Swarb to choose one for me and the answer came back like a shot: Now Be Thankful. It was a great shout.

Song and the voice streamed back into my mind the moment I read his choice and I am delighted to present it today, with this remarkable clip of a live performance of four decades ago (in a 2014 update, I said some boring suits at Studiocanal appeared to have badgered YouTube into suppressing that magical video, which I replaced with a superb studio version, also now gone. Here and now, in 2021, I found another priceless outing, also live, from 1970).

There was another reason for offering him the chance to choose his own candidate for the series: my feelings of minor guilt about the obituary, wildly premature I am glad to say, of one David Swarbrick, musician, that appeared in the Telegraph in April 1999.

Many will be familiar with the tale. I had been sent off to war, or at least to report from the fringes of it on the borders of Kosovo and Macedonia.

A call came from the obits department, where staff were unaware of my movements, and I was asked if I would write a piece about his life and achievements; Swarb was reportedly very ill.

I explained my non-availability and warmly recommended Colin Irwin, who obliged with the excellent article that someone at the Telegraph then slotted into the paper in the mistaken belief that its subject had died.

There is, incidentally, nothing unusual about preparing an obituary before someone dies. For perfectly good practical reasons, newspapers traditionally have viable articles ready for use at a moment's notice; I have even known obituaries editors treat ageing subjects to a lavish lunch to update details of their lives.

It is a little less common to break God's embargo, as one scholarly former colleague put it, and publish them without death having taken place first.

Twelve years on from that shocking error, one he managed with admirable speed and grace to see the amusing side of, Swarb has battled his way back from illness, defied advancing years and re-established himself as a working musician.

This Song of the Day is Salut! Live's tribute to the man and the musician. 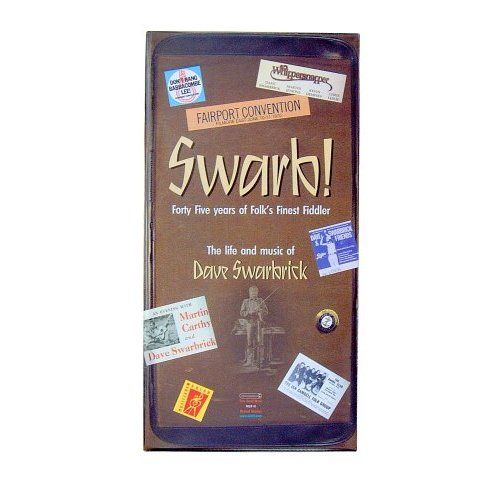 * I originally invited readers to buy Dave Swarbrick's boxed set and other music by him at this Salut! Live Amazon link. But see the tweet from my pal Rob, a music distribution pro.