June 2021 added thoughts: hardly an update as you'll find all I have to say in this short piece and some very astute comments posted by readers when the article originally appeared earlier in the Cover Story series  ... just to confirm that I do love and have always loved Dylan singing his own song but, on this occasion, love the Stones' version just a little bit more. This has prompted a mostly great discussion (and mostly opposed to my view) at the Bob Dylan Fan Club at Facebook; one chap asked 'who gives a ****?' but with 86 comments at the last count. some apparently do. And I've added a  Jimi Hendrix version mentioned my several people - it's very good but if I change my mind, it'll be more likely to be to revert to Dylan.

Bob was 80 last month. Salut! Live ran a series of items that was never meant to stretch as far as it did. But I am pleased with how it turned out: the series offers some excellent reading - and listening -  and I invite you to explore it at your leisure: https://www.salutlive.com/dylan-at-80/ 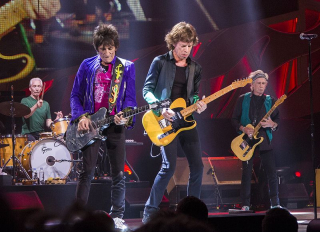 Many years ago in Paris, maybe 2006, I paid a fortune for tickets to see the Rolling Stones at the Stade de France.

I can enjoy stadium rock - Coldplay in Nice and Lyon were superb and I've seen impressive clips of other bands in other places - and the Stones' concert was excellent. I have not seen them live since but a review in my local paper when I'm in France, the Var-Matin (ahead of a Marseille gig, but based on a London show attended by the writer), noted that Ronnie Wood was getting better and better with the passing of years, while Keith Richards was not.

There was much in the Stade de France performance to appreciated. Jagger was super-fit, charging around the stage and its offshoots as nimbly as an athlete of 20.

He took care to speak French between songs - always appreciated when Anglo-Saxons play to audiences in France - and a generous selections of hits kept the crowd enthused and engaged.

But the musical highlight of the evening for me came after the show had ended and we were making our way our of the stadium.

At an unofficial merchandise stall, a ghetto blaster was playing the Stones' version of the Bob Dylan song Like a Rolling Stone.

This had not been on the concert playlist - much to my regret since it is perhaps the Stones, for me, at their best.

It is always risky to challenge Dylan and suggest anyone else can make a better job of any of his songs. But I have always believed that to be the case, much as I still enjoy his originals of probably most of his work.

And I have no problem with his version of Like a Rolling Stone, one of the songs that marked his departure from folk and even folk-rock and immersion in rock and one of two examples of that transition, the other being Positively 4th Street, that I most admire in post-acoustic Dylan. I heard his first and no other versions until the Stones covered it.

I can listen to both with great pleasure - hence the absence of a question mark in the headline - but simply prefer it by the Stones. And now I expect to be shot down in flames.

And now, having been gently nudged at Facebook, I add the same song, but by the much-missed Jimi Hendrix ....

I very much like Jagger's soaring harmonica towards the end but, otherwise, there's not much to distinguish the Stones' rendition from the original. Both are dominated by that characteristic organ riff - interesting that the video never shows the keyboard player - and Jagger's voice is no more powerful than Dylan's. Charlie Watts seems to be enjoying himself but, really, the band is just going through the motions. I enjoyed their version but it's no more than what is shown on the video - a bunch of guys in a club winding down their set belting out oldies; it could almost be karaoke. There's drive and volume, for sure, but not the raw emotion of Dylan's masterpiece. He may not score a knockout over the Stones but he wins decisively on points.

Colin..must totally disagree about " Like a Rolling Stone ". No one has or I believe can or will exceed Dylan's version which is singular and historic . Dylan's version is of that unique moment in history . It is indelible and cannot be touched by subsequent takes on it by any others . There are other songs where another artist one might say surpassed the Dylan version. Famously Dylan has said that himself about Jimi Hendrex's take on"All Along The Watchtower ". Hendrix had a knack at covers . I wouldn't say he surpassed "Cream" but he did a great version of "Sunshine of Your Love " that deserves respect . The idea that a cover may surpass a Dylan original becomes more possible with later works ... there are many beautiful cover versions in many genres of Dylan's "To Make You Feel My Love " that one might reasonably consider superior to the original . I hope you did not compare the Stones version to the YouTube link of the supposed Dylan original of "Like A Rolling Stone " that you posted . The Stones version IS superior to that . I assume that is just an error and does not reflect your discernment of Bob's music . Your supposed link to Dylan's original is actually a link to a tribute band . Once you click on the link , the credit at the top of the title frame reads : "Post Productions perform a tribute to BOB DYLAN " . I love your posts about considering classic or groundbreaking songs and the artists they influence . I posted here in the past taking up for Pete Seeger's version of " The Bells of Rhymney " . Great to see this again . Best to you from the USA .

You are completely right, Stan, and I hope I have corrected it. The story behind this lapse is that I mostly prepared the article for posting in August, let it slip then and did not double check before publishing this morning to ensure I had correct clips.

I take the points both you and Bill make from the other side of the Atlantic (and, for you two, the other side of one of the Trump borders) and am listening now to Dylan and loving it. I didn't offer much of a reason for preferring the Stones in this case. I just do, and it may even have something to do with how little I have otherwise enjoyed the Stones in the past 20 years or so compared with what they meant to me in the 1960s and 70s.

My record on Dylan and covers is a mildly controversial one in any case. I much prefer Baez to him on Don't Think Twice, though not on most of the other songs of is that she recorded without him. I love what Sandy Denny did in French to If You Gotta Go, Go Now ...

Great to see two familiar names back among the comments, though.

Sandy Denny's "If You Gotta Go" is one for the ages. Inspired.

PS - But I also prefer Mannfred Mann's version of the song - Paul Jones it a playfulness that Dylan's rendition, which I'm also very of, lacks.

Nowt to do with who sings Bob's songs best. He's a genius. He was a phenomenon. When he wrote Like A Rolling Stone (lasting seven minutes give or take) about a prostitute, every one else (Beatles included) were doing three minutes for commercial airplay about love and kisses. Blowing in the Wind, Times a changing ... he was about 21 back then. I was there, a schoolkids entranced. Who sings his songs best. Don't give a shot. He is the man. Put it in context people. He changed pop music into something else.

Best cover of a Dylan song: Nina Simone, and this:

As I suspect Colin Randall knows, even Dylan much prefers Hendrix's version of All Along the Watchtower.

Hey let’s not start on the Byrds versions......

Lots of people do Dylan songs better than Dylan! Waiting for you to do Disturbed v Simon and Garfunkel with Sound of Silence.

Dylan for me. A gentler, more laid back sound that contrasts with his voice and the song needs his particular sound I think

Needless to say, individual taste and aesthetic varies enormously, and many of us (myself included) have strong feelings about which version of a particular song we love best. My primary admiration is always for whoever summoned the genius and inspiration to write the original version, regardless of how well and how often it is covered by subsequent performers. Example: I really, really love Buddy and Julie Miller's version of RT's "Keep Your Distance," but RT's original is still first in my heart, because...well, because he's Richard Thompson, and it was his vision that made it possible. I really enjoyed reading these comments--I learned a lot, and they made me think.

does anyone do a bob song better than bob. probably not. but the stones pull it off, great version.

Huge Stones and Dylan fan.....in my humble opinion ...this song should not be covered...not by anybody...

I'm a huge Stones fan, but i gotta stick with the original, as it is perfect in every way.

Via Fact, one of several to mention Jimi ...

I used to maintain that the original was always the best. simply because the song was intended to sound exactly like that. As I've grown older I've come to appreciate cover versions can in many cases enhance the original even if they are few and far between. A good example that's been mentioned already is Dylan's, 'Make you feel my love.'Not atypical of Dylan in his later years, he seems barely able to summon the energy required to perform his own song. Arguably his is the worst version in fact. It's terrible.

Some of Bob's songs are better by others but not this one. I like the Stones version and their Brixton Academy performance, Jagger in particular is energetic and fantastic to watch but we are talking one of the monumental recordings of the rock era with Bob's version.

There are perhaps a hundred classic covers of Dylan's songs, and many that weren't (classic or memorable). Some of my favourites in terms of time, place, context etc (although not necessarily 'better' than Dylan's versions) are Tambourine Man (Byrds), All Along the Watchtower (Hendrix), Wheels on Fire (Brian Auger/Julie Driscoll), Mighty Quinn (Manfred Mann), Farewell Angelina (Baez), I Shall be Released (Band) and a few others. Oddly, I also liked Johnny and the Bandwagon's version of Tambourine Man (not a classic but memorable).