Home Archives Profile Subscribe
Dylan at 80: a respectful comparison of Mr Tambourine Man, by Bob and by the Byrds
Dylan at 80: positively a bitter slice of the master’s prose and the 'gawping amazement' it stirs

Dylan neat or Dylan beat. Blowin' in the Wind by the master or by Peter, Paul and Mary

No sooner had the dust settled on my little discussion of Mr Tambourine Man, itself inspired by my first boss in journalism, Mike Amos, than a related instalment of the Dylan at 80 series crops up.

And Mike, still a good friend decades after that start of mine in journalism and godfather to my elder daughter, plays his part once more.

If you have been paying attention to this series - and mighty thanks to well over 400 visitors to the site yesterday who may have seen that piece on one early Dylan classic - you'll know that Mike believes that easily the finest cover version in Dylan songwriting history is the Byrds' short, sharp and startling treatment of Mr Tambourine Man.

I agree it's good, very good indeed, while preferring Dylan's own.

In 1962, two years before writing Mr Tambourine Man, Dylan put the finishing touches to another outstanding and enduring song, Blowin' in the Wind. It went on his second studio album The Freewheelin' Bob Dylan which was released the following year. My memory can be shaky but this may have been the first Dylan song to make a mark on my teenage consciousness. 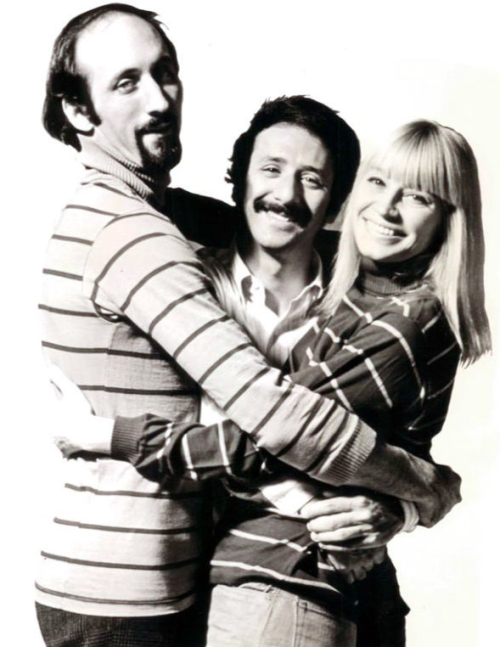 But as the photograph above implies, it was not Bob Dylan who introduced me to Blowin' in the Wind, a song that quickly became an anthem for the US civil rights movement widely seen, despite the mystique with which Dylan sought to drape his own lyrics, as an essential part of the clamour for racial equality.

So that's clear enough, then.

No matter, Peter, Paul and Mary turned it into a smash hit.

Acknowledging my reference to him in yesterday's Dylan at 80 piece, Mike Amos reveals the great affection he had for the trio and, in particular, one of it members.

As it turns out, Mary Travers's four husbands did not include my friend up north, but he writes nonetheless: "Better not get me started on Peter Paul and Mary. Mary Travers in her prime could have sung Baa Baa Black Sheep - come to think, she did - and blown me away. What did she have that Dylan didn't, I wonder?"

Pete (Yarrow) and Paul (Stookey) are elderly but still with us. Sadly, Mary Travers died from leukaemia in 2009 aged 72. They have enriched the history of folk music, albeit at its poppier end.

Still ringing in my ears, I have the view of Bob Frazer, a fellow-member of the Bob Dylan Fan Club group at Facebook, that it is meaningless to declare this or that version to be the best when it can be no more than an expression of personal taste. So I shall limit myself to saying I liked P,P and M's treatment then and like it now, and could say the same about Stevie Wonder's later version, but would always turn to Dylan as a matter of preference.

But the clip I choose brings together the singer, a great song and its interpreters including P, P and M, Pete Seeger and the Freedom singers ....

This is harder than it sounds. My intro to Dylan came through PP and M. They cared about the music and Mary Travers had great passion.