Earlier this week, I confessed to having changed a view held for decades. Listening again to Bob Dylan's very early Percy's Song original, I conclude that I had been wrong to consider Fairport Convention's cover, excellent as it was, superior. Here's another comparison of bard and band ...

Bob Dylan became a hero of mine in the mid 1960s. Given the length of his career, it is surprising how short-lived my hero worship turned out to be.

I have never stopped liking him but much preferred what he did in his earlier professional life. Many of the songs he wrote then move me deeply to this day. Interest diminished as the years went by and I am unable to put names to more than a few of the later albums or individual tracks.

That is an issue for me, no one else. It has nothing to do with "traitor Dylan going electric"; I loved Blonde on Blonde and was positively energised by the British folk rock bands that emerged from the late 1960s. It simply reflects changing tastes.

And it explains why I tend to restrict my own coverage of his work to the era that means more to me. Others are better equipped to deal on what he has achieved since, which is why Bill Taylor has written the main Salut! Live piece on Dylan’s 80th birthday that will appear a day or two before the milestone is reached.

Below, I will also reproduce a contrary argument,  argued with passion by an upstate New Yorker, which appeared at one of the Facebook folk groups I belong to.

But it follows that my latest choice for my Dylan at 80 series should have been written by him in 1964. If You Gotta Go, Go Now is not a bad song. Nor is it, in my view, among Dylan's best and, like a curious number of other Dylan singles, it did not prove easy chart material. 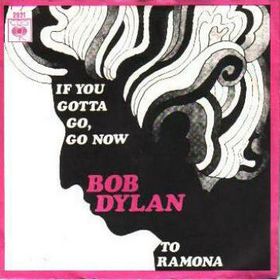 An English band, Liverpool Five, was the first to release it as a single in the US, in 1965. It received some airplay but did not trouble the hit parade.

The same fate greeted Dylan's own version when it was presented to an unimpressed Dutch market. It took the jaunty pop treatment of Manfred Mann to turn it into a hit, rising to No 2 in the UK.

The song sprang to life of a quite different form after a bunch of fans attending a Fairport Convention gig wandered backstage to meet the band. Simon Nicol, a founding member, recalls them as French students in London - or maybe students of French - and Si Tu Dois Partir was born. A nine-week stay in the British top 40 and the lofty heights of No 21 may not seem much of an achievement.

But it was the nearest Fairport, a magnificent project and band, got with a single to chart success. In my mind's eye, still see them on Top of the Pops for heaven's sake.

Of course, it thrived on novelty value. But the sheer fun of the performance, from Sandy's exuberant schoolgirl French to the toppling milk bottles, did not so much turn OK Dylan into classic Dylan as give music a rather different song than intended by its writer.

The clip, from 1969, is more rough and ready than the polished single and was recorded in one of John Peel's memorable BBC Peel Sessions.

* And here, as promised, is another voice on the merits of Bob Dylan. Step forward Michael Smith, from Geneseo, New York State:

Impossible to assess such a body of work in a few sentences... I'm one who enjoyed & enjoys the entire oeuvre, and Self Portrait/New Morning especially. And all the accompanying releases... the box set, the recent 3 disc set, the much maligned Columbia release Dylan. Never understood the negativity surrounding Knocked Down Loaded & Down In The Groove. Truth. Lots of fun music there if you listen.

I have friends who "don't like his voice", and I stand and wonder if they ever listened to him. The first album of his I owned was Another Side, soon after its release. I didn't know he was drunk on wine and recorded it in one fell swoop, but I knew I was listening to genius.

I agree with Bill Taylor that mono is the best version of Blonde on Blonde. And John Wesley Harding, also. Time Out of Mind got me back to deep listening of Dylan. My thoughts for the moment, thanks for the opportunity...

Proof that a novelty song can sometimes be a really good song. Fairport's was a lovely treatment of what I don't think Dylan ever meant to be taken very seriously. No, it's not one of his best works, far from it, but it's a nice piece of whimsy.
For my money, Manfred Mann did it best, with Paul Jones making the playful best of Dylan's teasing lyrics. But I'll take any of the three versions of this one.
But not the Liverpool Five's. I'd never heard it (until now I'd never heard OF the Liverpool Five but a little research tells me they were all Londoners) until I just found it on YouTube. Not really worth the effort.

The reason it’s such a good cover is that the treatment is so different you can’t compare and say whether it’s better than the original or not. It’s a different song almost! As with most Fairport covers of Dylan’s work.
Same as with Hendrix and “Watchtower”.
Covers that simply mimic the original are a bit of a waste of time in my view. A good cover doesn’t just copy but develops the song into something different. A different genre or whatever.
For example I have a whole double album of Reggae/Dub covers of Dylan songs and I love it.
Most covers of his songs I hate. And don’t mention that Adele person!! :-(

Up to a point, Jon! Joan Baez covers of Dylan usually just replace his special voice with a great one (not to everyone’s taste, of course) and often work for me

Colin Randall
Yes there are exceptions, Baez being one, Johnny Cash another, where they are able to change nothing much but the voice and yet still make a valuable piece of musical art.
I think possibly the thing there, apart from their great voices, is that they are so close to the original artist spiritually, even romantically/sexually in the case of Baez, that they are somehow able to channel the song in exactly the way Dylan would, and yet still breathe new life into it.
Copying but not copying if you know what I mean! Almost ‘becoming’ the original artist and assuming their identity, but with a different voice.
There aren’t many people that can achieve that, particularly with Dylan songs.
That’s getting a bit too deep but it’s Friday night and I’ve already “uncorked”! 🙂