Derek Jolly RIP: from Shildon and Bishop to Bulgaria with his grandfather's ferret

Just a few months after the death of Phil Steele, I learnt that another fixture of the folk scene of South West Durham from the late 1960s had also died, some months earlier. And there are links.

I was alerted to the death of Derek Jolly by Bill Taylor, my good friend from Bishop Auckland who has spent most of his adult life in Canada. He came across mention at the folk forum Mudcat. 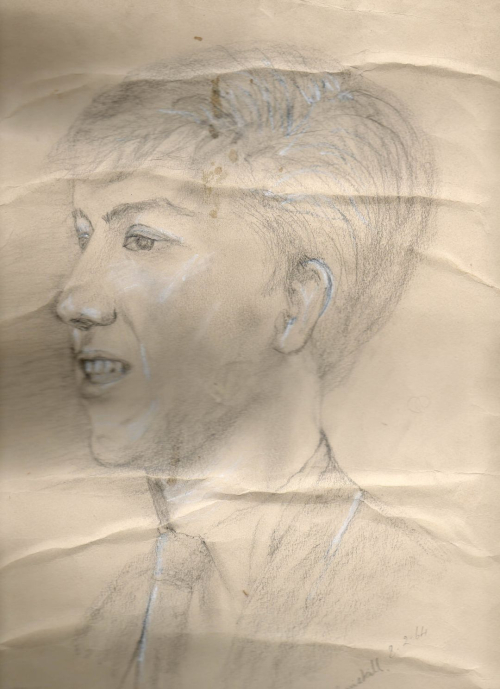 A former girlfriend of Derek's, Anne Massey, regretted the use of the 'unflattering' photo of him in later life that you see above. She dug out this very accurate sketch - her own - from 1964

Phil and Derek were also friends even if, like me, they had lost contact. Both were from my own home town of Shildon and were involved in the folk club I opened at the Castle Hotel in the market place in Bishop Auckland, three miles away.

That club later moved house, relocating to the Aclet on the other side of the town. And just as I left County Durham to try my luck in London, Derek and his then wife set up home in Reading,  where he again helped to run a folk club. Later he lived in Cyprus and then Bulgaria, where he died

He was great fun, with a wry sense of humour and something of the mischief-maker in him. The last time I saw him was when he pitched up on my doorstep back in the 1990s and we ended up having a few pints of beer followed by takeaway fish and chips. 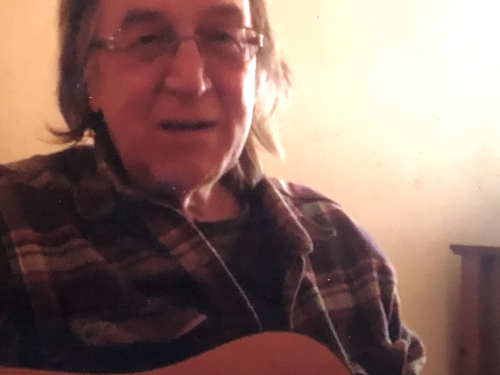 A Mudcast contributor, Simon Needs, wrote in September 2020 "Derek Jolly died recently in Bulgaria where he had lived for the last few years. Derek was originally from the North East of England. I believe musically he was mainly a blues man but is chiefly known on Mudcat as the writer of My Grandfather's Ferret.

"His claim to fame, or so he said, was having the first sound to light disco - I have no idea whether that was worldwide, countrywide or in the North East."

Derek, who would have been around 73 when he died, based his amusing My Grandfather's Ferret on the well known song, My Grandfather's Clock, written in 1876 by Henry Clay Work, who also composed Marching Through Georgia.

The original was inspired by the longcase clock that stands at the George Hotel on the outskirts of Piercebridge, a village that lies within Co Durham though the hotel is just across the River Tees and therefore in North Yorkshire.

Some accounts claim Work stayed there - indeed some accounts say the highwayman Dick Turpin did, too - but there is no evidence he ever left the US. A likelier explanation is that he heard the story of the clock, which suddenly stopped ticking the day its owner, the publican, died. One version is that the tale was taken back to American and to Work by a touring "blackface" ensemble, Christy's Minstrels.  As for the George, I can at least confirm a) that I have definitely stayed here and b) the clock was still standing when I did.

My grandfather's ferret was a creature of little merit

And it lived round the back in a cage.

The smell it gave off made you splutter, gasp, and cough and its habits were unspeakably gross.

And it bit off anything it could chew if you came too close.

"Derek Jolly - what an appropriate name,`' wrote another Mudcatter, `'McGrath of Harlow'.  "Just back from a session in a pub where I sang it. The fella playing the mandolin had to stop, because he was cracking up with laughter."

Back in 2009, Phil Steele's wife, Carol, reported that Derek had suffered three heart attacks, two years later prompting a response. Derek wrote: " ... Still alive and well and Annie and I are now living in a beautiful restored farmhouse in North-Eastern Bulgaria with two dogs and a retired donkey." I thought I knew who "Annie" was but have now found out I was mistaken.

There are clearly gaps in my knowledge and I shall update as I learn more.

Derek was witty, smart and instantly likeable. The memories he leaves are good ones. Rest easy, pal, and condolences to Annie.

I can't believe that Derek is no longer with us. I haven't seen him for years, although I have tried several times to get in touch with him. I feel that he was such an important part of my life even though he and I were always like chalk and cheese but we were still great together. I still often listen to the recordings of our Folk radio programmes and concerts. God Bless Derek, I will miss you.

Sad to see another name from my past only to acknowledge his death. I always called Derek 'Jolly' because he was. One night I remember Jolly sneaking into his parent's garden at 2 am to harvest some plants he had been cultivating to bring back to the party. He was convinced this green foliage was ready to smoke. When he returned with his treasure and proceeded to try and smoke it everyone was in both hysterics and convulsions as the most disgusting smell imaginable permeated the house. He thought it was hilarious.

Marshal Skelton brilliant story. Once when I was hitching down to London he gave me something to put in a roll-up. I say
´gavé but seem to recall paying him £1. But he was a prankster not a dealer - it turned out to be cinnamon

Very touching comment , Peter. In many ways your thoughts mirror mine

Yes, Jolly by name, jolly by nature. I didn't know Derek terribly well but I don't remember ever seeing him without a smile on his face. And my recollection goes back as far as Bishop Auckland Grammar School, where he was a year ahead of you and me (so, yeah, that would make him 73 when he died). I went to the Castle Hotel club a few times as I started getting into folk music. Oddly enough, Colin (and don't hold this against me!), I don't remember you there. I always thought of it as Derek's club. Memory is such a selective thing. And I'm wondering now how come he never came to the Aclet. I don't think he did and he would still have been in the area then. It sounds as if he'd made the life he wanted for himself in Cyprus and then Bulgaria. How sad that he wasn't allowed to enjoy it for longer. But if there is a heaven, I'm sure he's jollying along a choir of angels and getting them going on My Grandfather's Ferret. RIP.

I was sorry to learn of the passing of Derek Jolly. I knew Derek in the early 1970s when he worked as a Technician in the Department of Engineering at Newcastle University when I was a student there. Peter Elliott ( of the Elliott's of Birtley family ) was also there at the same time working as a draughtsman. Derek moved from Newcastle to work for a bioengineering company as a service engineer and I lost touch with him.
One of his major claims to fame was the fact that in February 1972 the new band formed by Paul McCartney (Wings) took second billing to Derek and the group he was playing with at one of the University halls of residence. Derek's group had been booked some time previously, and Wings were undertaking an impromptu tour of universities and turned up at Newcastle wishing to play at the University ballroom. As it was a Sunday the ballroom was closed, but they were directed to one of the Halls of Residence at nearby Castle Leazes at which Derek was playing. The band arrived and provided second billing to Dereks group. Unfortunately I can not remember the group that Derek played with.

What a great memory and anecdote, Nicholas. I shall try to find out the name of his band

In answer to the above question - Derek and I were a folk duo that sang together in folk clubs and concerts and were just known as Pete Robbins and Derek Jolly. We were booked to host the finale night of Newcastle Festival in 1972 and we got together some great instrumentalists to help us out. These included Jim Catterall on melodian, Foster Charlton on fiddle and pipes and John Hansbury on harmonica and we all stayed together and became 'The Borderers". We were the band that played that night at Newcastle University and have always said (bragged) that Wings were the best supporting act we ever had.

Great to hear from you, Peter. I have some other additional info and will knit it all together one day soon.

I did the Castle gigs when I was about 15 or 16 I guess, but also joined a caving club at the time, we used to have our club meetings in the Alma pub Shildon, Derek was a member, is there anybody out there who remembers?

I filmed the video used in the article and Derek and Annie were amazing people and will be sadly missed. Spent many a good night in their company in the wonderful village of Dragoevo in Bulgaria. I loved hearing the original story of how he wrote the song, and the pittance he received from the BBC :)