Bob Dylan at 80. Others screamed 'Judas!', I was enthralled

Today, as we have relentlessly and quite rightly been reminded, is Bob Dylan's 80th birthday.

A woman he once loved, Joan Baez, passed the same milestone in January and a British singer and musician from whom he learned a little, Martin Carthy, was 80 on Friday. Other notables born in 1941 range from the US politician Bernie Sanders and Swedish actress Ann-Margret and music industry figures including Paul Simon and Art Garfunkel, Buffy Sainte-Marie and Neil Diamond.

A good case can be made that the life and work of Dylan have had a greater impact on the world than any of the others I mention.

In a fitting climax to our Dylan at 80 series, Salut! Live wishes the rock'n roll beatnik bard a happy birthday and presents this compelling appreciation by my friend, Bill Taylor, a fine writer, photographer, supporter of Sunderland AFC and, like a former SAFC manager, Roy Keane, a lifelong Dylan fan ... 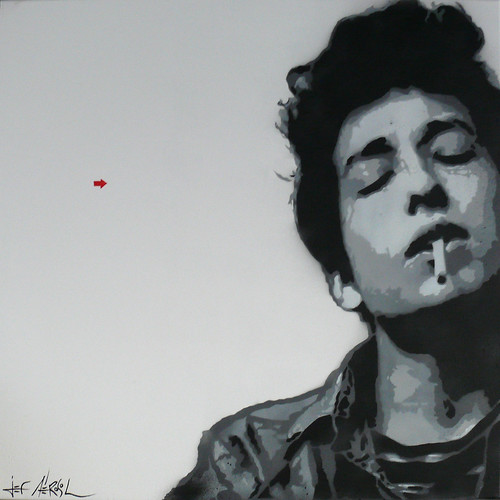 Jef Aerosol, a French artist, kindly allows my use of his work. You'll have seen his striking Sandy Denny image on these pages

Cool, hard, diamond-bright and, just as 90 per cent of an iceberg is underwater, what you see with Dylan has always been a good deal less than what you get.

Plus, just as an iceberg’s lifespan is as much as 3,000 years, Dylan seems to go on forever.

His so-called Never-Ending Tour, an ongoing series of concert dates, began on June 7 1988. Even allowing for an inevitable pandemic hiatus, that’s monumental. 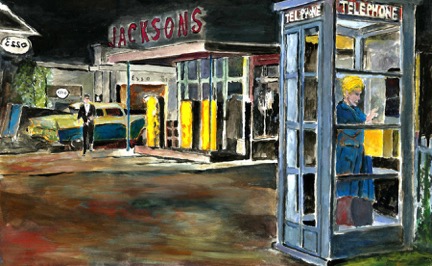 Dylan was always fearless. Never reluctant to go out on a limb, never hesitant to shoot off at a tangent, never afraid to take everything that had worked so well for him, blow it up and start on a new path.

You can see him three nights in a row and it’s like seeing three different concerts – rarely the same set list twice and he’s apt to give a song such an unusual interpretation, you might wonder at first what it is.

I was in the audience at the Odeon Theatre, Newcastle, May 21, 1966, one of the last stops on a world tour that sent Dylan in another direction, leaving in his wake a legion of traditionalists feeling betrayed, outraged, forsaken:

The first set was acoustic, the Bob Dylan we knew and loved. And it’s worth reminding ourselves that he was always a good musician. Never just a three-chord strummer but a very decent guitarist and harmonica player with a voice, raw and idiosyncratic but tone-true.

For the second half he brought out the musicians who would become, officially, The Band and in more ways than one electrified us all. Folk-rock was upon us with a vengeance.

Some of the audience got up and left, a few of them going down to the front so Dylan could see them walking out. A lot of other people, my friend Barry and I included, were enthralled. We were seeing the future and we loved it. There was no going back from this.

It had been the same throughout the tour.  “Judas!” one fan yelled at the Manchester concert.

A far cry from the baby-faced troubadour who a few years earlier had been picking up whatever little club gigs he could find in Greenwich Village where, as he wryly recalled in Talkin’ New York on his first album, he “blowed my lungs out for a dollar a day”.

But even then Dylan was not working haphazardly. He was guarded, calculating, playing his cards close to his chest as he charted his next moves with a steely resolve.

My friend, film-maker Terence Macartney-Filgate, who was working in New York and knew Dylan in those early days, recalls him less than fondly as “sullen, uncommunicative, tiresome”.

(As an aside, D A Pennebaker made a wonderful documentary, Don’t Look Back, about Dylan in England, including a lovely sequence with Dylan trying to make sense of Alan Price’s accent. Pennebaker used a then very innovative, hand-held camera, fly-on-the-wall technique that he learned from Terry Filgate.)

And I thought I MIGHT have seen him at Ontario’s Mariposa Folk Festival in 1986. Dave Van Ronk, one of Dylan’s early influences, was in the lineup and one of headliners was Joan Baez.

The organisers set up a press conference with her. The most pressing question was not about Baez and her music but whether Dylan was planning a “surprise” guest appearance. I felt sorry for her, trying to convince reporters that her denials were genuine.

They were. He didn’t.

From a massive body of work, including books, films and musical collaborations, it’s impossible to pick out a few classics. Dylan has written a LOT of classics.

Instead, let’s look at a couple of cover versions of other people’s songs, showing his willingness to try pretty much anything and not be afraid to fail.

Like Samuel Johnson’s dog walking on its hind legs, “it is not done well but you are surprised to find it done at all”.

Then there’s his Clothes Line Saga, not so much a parody of Bobby Gentry’s Ode to Billy Joe as what Dylan reportedly regarded as a reply to Gentry’s dirge, full of the same sort of mundane imagery and non-sequiturs.

A delightful piece of deadpan, gently mocking humour, it’s featured on the Basement Tapes album. But good luck finding it on-line. The best I could do was a nice version (from the “A Nod to Bob” tribute album marking Dylan’s 60th birthday) by Suzy and Maggie Roche:

I haven’t touched on Dylan’s 2016 Nobel Prize for Literature. What really is there to say other than to quote from the citation: “For having created new poetic expressions within the great American song tradition.”

It was an award that wasn’t met with universal approbation. Hard to begrudge it, though. Not that he’d care if you did.

Dylan keeps moving, building a reputation now as a painter. Again, to a mixed critical reception. But I like what Jonathan Jones wrote in the Guardian:

“He has a surprising amount in common with (David) Hockney. His art looks more serious with every exhibition… A real artist made these drawings and paintings. Their integrity is compelling. They demand to be looked at, for their awe and wonder at the beauty and grandeur of being alive. These are the pictures of a true poet.”

A real artist. A true poet. What else is there to say? Volumes. You could fill an encyclopaedia.

Another fine tribute to Dylan. Thanks Bill and Colin for sharing all the comments and links. How I wish I could have been among the audience. Blowing in the Wind was one of the first things I ever learned to play on the guitar I bought from Brotherton in Bishop Auckland. I am now the proud owner of one of the limited edition prints signed in person by the great man himself featuring his handwritten lyrics and sketch which is a constant reminder of his genius.

Great stuff, Bill. Love the bit about the dog as well.