We could get very, very political about this one. Indeed, some versions of Hard Times of Old England do just that, replacing tales of woes afflicting the working class of the 18th century with waspish commentary on modern deprivation and grievances.

Even now, someone may well be working on new lyrics to cover the world-beating incompetence, nasty party dynamics and sleaze of Britain's dishonest, Brexit-worshipping government.

There is a solitary redeeming factor, the success of the NHS and volunteers and their effective vaccination roll-out for which, if are to be totally fair, Boris and ministers deserve some credit since we'd have been quick to condemn had the programme been the sort of shambles that otherwise characterised their handling of the pandemic from its beginnings. 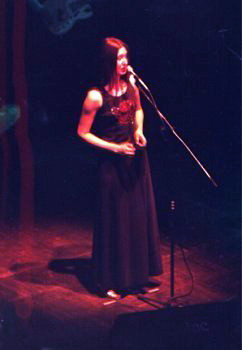 Maddy Prior in the 1970s. Courtesy of Roger Liptrot's Folk Images site

For this instalment of Salut! Live's Cover Story series, I start, unsurprisingly, with Steeleye Span.

Their first shot at the song was released as a follow-up single with the aim of emulating the chart success of All Around My Hat, which reached number five in 1975.

It failed to do, the informative website Mainly Norfolk: English Folk and Other Good Music noting ruefully: "This deserved to be another hit single but the lyrics were perhaps too realistically gloomy for the pre-punk area."

I liked the Steeleye version back then, Even more, much more, I like the remake from 2002 with Maddy Prior presenting the vocals much more slowly and Peter Knight and the other musicians skilfully creating an almost ethereal ambience.

Martin Carthy, an early member of Steeleye, of course, learned Hard Times of Old England from the Sussex singing family Copper Copper, and no look at the song would be complete without reproducing their simple, honest delivery, the late Bob providing sparse concertina accompaniment in this priceless old film.

"I'll take anything I can get of the Copper family," wrote an enthused American listener, Sandi Morey, at YouTube. Sandi, whose website says she "has been collecting and performing and collecting traditional folk music for over 60 years, added: "They came to Berkeley once years ago and we went. So glad we did."

Carthy was keen to acknowledge the Coppers' role in bringing the song to the attention of the British folk world, the sleeve note of his 2001 compilation, The Carthy Chronicles, stating: "Child may have written down the songs; Sharp may have recorded them; but the Copper family of Rottingdean kept folk songs alive in the way they should be preserved—by singing them. Much adapted and strangely contemporary, this 18th Century song is from their repertoire."

Carthy joined Roy Bailey (plus John Kirkpatrck and Stefan Hannigan) for Band of Hope's treatment of the song in the mid-1990s, the uplifting fiddling of Dave Swarbrick making a stellar contribution to the recording.

I enjoyed Billy Bragg, with Imagined Village, and Chumbawamba and their fast-forwarded of the lyrics to reflect 20th and 21st century social injustice, with corporate greed and privatised public services among the contemporary ills, and reproduce  both. "If we sing out of tune it's the leaves on the line," Chumbawamba sing.

Each of the versions I have included, and I am sure several more, has merit and `i share Carthy's admiration of the Coppers.

But as a matter of pure personal taste, the fabulous voice of Prior and virtuoso playing of her band lift Steeleye Span to heights the others cannot quite reach.

I dunno how fair it is to compare the Copper family's living room singalong to the other much more professional arrangements.
Steeleye's Span's is far and away the best. For me, the band has always owned this song. Their old version and the new almost become two different songs. I love them both, with the faster original narrowly edging out the other. I have them both on Spotify.
Swarbrick's fiddling is the only distinctive thing about the Band of Hope's rendition. Quite ordinary. As is Billy Bragg's. I blow hot and cold with him, anyway. Lukewarm, I guess, for his "Hard Times."
The less said about Chumbawumba's update the better. Trite and annoyingly obvious new lyrics. But I tuned out off halfway through so maybe the second half was much, much better and I missed it. Oh well.

I like the agitprop versions but nowhere near as much as Steeleye, either one but for me the slower treatment. Fair play to Chumbawamba for acknowledging the Copper connection when introducing theirs

Ian Anderson, who edited fRoots, commented at Facebook: "The Copper Family were a bit miffed at the time.
John: 'I just hope that the songs continue to give as wide an audience of people happiness and pleasure. I’m sure that Jim and Brasser and Honest John, and all the others before them would agree with that sentiment. As long as they’re treated with a bit of respect, and sometimes appreciation is shown to the generations of this family responsible for carrying them into the modern day, then I’m perfectly happy for anyone to perform them, and the more they do, the better I like it. I sometimes think that people ought to mention, just now and again, that it was through the work of Jim Copper, and his father, and Bob Copper as well, that these songs reached the modern day – I feel strongly about that.
'When the Steeleye Span crew did Hard Times [Of Old England], there was no recognition of the source. OK, it’s traditional, we don’t want bloody royalties or anything, but they ought to say'."

Like All Around My Hat , the faster version of Hard Times is very Status Quo inspired. I've heard a version of Hat by Steeleye with Quo but strangely enough, the faster Span original rocks up the song far more effectively !

I'll take the source singers version over the smoother versions of any song. The Coppers have collected, saved and,although they aren't fabulous singers, they breathe these songs into the present day in as close to their true forms as we probably can get. The rest of us can learn from them and then we gussy it up and it becomes a commercial product. That is important to keep the song alive, but I like getting it from as close to the source as I can get. I've been singing "All Round My Hat" for at least 60 years. I got it out of a print collection in my college library.
What fun having all these variants to listen to. I think, in terms of teaching, I favor Band of Hope's version as I think contemporary regular folks would enjoy the uptempo bounce. But I would use the Copper Family words. When we saw the Coppers in Berkeley they had the entire family so there was harmony of sorts. I had to cancel my own singing group, but it was so worth it to experience them in person.

Many thanks for an interesting comment, Sandi. My response appears in your own analysis: the importance of modern interpretations "to keep the song alive". Even your preferred version, by the Band of Hope, uses a more polished accompaniment to give Hard Times a lift. I am fortunate in being able to appreciate "source singers", too, though they also came across the song as collected from others and I dare say their version builds to some extent on how it was first heard by the collectors. Steeleye members served decent apprenticeships in non-commercial folk as I describe briefly at https://www.salutlive.com/2021/03/maddy-prior-steeleye-span-sails-of-silver.html and I think they invariably treated traditional songs with respect (notwithstanding Ian Anderson's earlier comment on whether proper credit was given by them to the Coppers)

Nobody are talking about Robin Williamson version. For me is the best.
Because he is a great collector of british folk