Song of the Day: Bob Fox and Stu Luckley ... the Bonny Gateshead Lass

April 2021 update: 10 years after it first appeared, I return to this cracking piece of North-eastern singing and playing, folk meets music hall, from an album released in 1978, The chosen track remains, for me, a firm favourite.

I last saw Bob Fox perform it at the Davy Lamp folk club in Washington, Tyne and Wear.

It was a fitting end to a great day, Bob's team and mine, Sunderland, having beaten Liverpool thanks to a Darren Bent shot deflected into the goal by a beach ball that a young Scouser had thrown on to the pitch.

Having witnessed that victory (the Premier League feels a long way away just now), I savoured a great performance  by Bob, accompanied not by  Stu Luckley but by the former Lindisfarne man (and Newcastle supporter) Billy Mitchell. The place was heaving and I had to deploy all the charm at my disposal ('but we've come all the way from the south of France ...' ) to gain admission. Happy days and nights 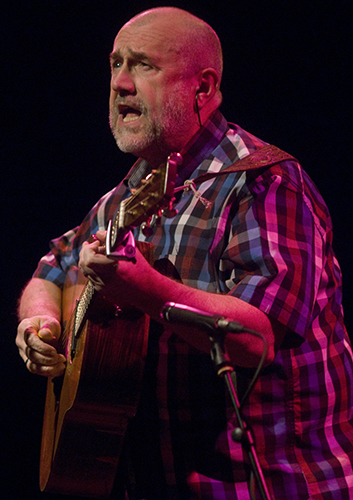 Bob Fox and Stu Luckley have combined to great effect on many occasions, notably with a exceptional album Now So Good'll Pass album first released in 1978.

You'd find lots about Bob on Salut! Live by entering his name into the search box (and you'd also find an interview with him at Salut! Sunderland).

The Bonny Gateshead Lass, was a stand-out track and, given the quality of the rest of the album that is saying something. Written by the Tyneside songwriter Joe Wilson, who lived for just 33 years in the 19th century, it offers a humorous if romanticised slice of life and courtship. I love this verse:

She says her mother keeps a shop and sells hot pies and candy,

And her brother he's a cobbler in the high part of the town.

Now she was a dressmaker and we got on so well together,

That I blessed I'd been so awkward as to stand upon her gown.

And I adore the tune, Elsie Marley, that follows the song. This is English folk music - though some would quarrel with me on whether it qualifies - at its very best, a great song sung and accompanied in exemplary fashion.