What goes through your mind with news of each mass shooting in the United States?

Shock, I suspect, no longer comes into it for most of us. Beyond sadness for the victims, my thoughts are dominated by sheer anger at the American gun culture and its champions' moronic mantra “the only way to stop a bad man with gun is to have a good man with a gun”.

What has this to do with Salut! Live’s Instruments of Pleasure series? Well, the latest instalment concerns two instruments, Simon Mayor’s mandolin and his voice delivering a relevant anecdote.

The man-made instrument heard on Man on the Plane is Mayor’s familiar mandolin. He pays it, as ever, exquisitely but the tune is secondary.

It is just the “jolly jingle” his partner Hilary James suggested would be ideal as a lead into a wickedly funny piece of mickey-taking. His target is of the kind of woodentop attitudes that help in great measure to fuel this American exception, the right to possess lethal weapons with, often enough, scant control over who has the possession. 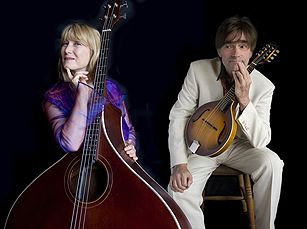 Moral high ground, I should say, is not abundant in Europe. They, the Americans, have crazed gun laws, or lack of them, and voted in their millions for Trump. Our self-harm of choice was Brexit and Boris. The French show distressing enthusiasm for the odious Le Pen family though not sufficiently (so far at least) to risk putting one of them in the Élysée palace.

I won’t spoil Simon Mayor’s anecdote by revealing more, save to say Mayor's American accent perhaps needs a wash and brush up.

You can hear it, and the jolly jingle, at the YouTube link that follows.

When I asked Simon Mayor about this track he initially referred me to the Mayor/James website, which I commend heartily and can be found here.

There you will discover a lot more about them and their music, including plenty of samples of their work.

The instrumental part of this live performance offers the perfect backdrop to the anecdote but, as Mayor puts it, "has never appeared anywhere and doesn't even have a proper title". It was something he had started writing and then put down unfinished until this raison d'être presented itself.

If you'd like something different, try this. It is the couple performing with their band, the Mandolinquents, Vittorio Monti's Czardas.

To bastardize a popular NRA trope, “When mandolins are outlawed, only outlaws will have mandolins…”
Simon Mayor tells a very funny story. But only up to a point, if you’ve actually been there and done that.
As a working journalist with a fair mount of visibility in what was a violent city at the time (Philadelphia), I kept a handgun at home for a while. And went through that subtle change of thinking from, “IF I ever have to use this” to, “WHEN…”
It came as a considerable relief to move to Toronto and leave the gun behind.
My brother-in-law in Virginia is an ostensibly intelligent man – an aeronautics engineer, a former Commander in the U.S. Navy with two master’s degrees.
He’s also an NRA stalwart, owns upwards of 30 guns, carried one, legally concealed, at his daughter’s wedding (as did the groom), believes Barack Obama was born in Kenya, and that Donald Trump had the presidency stolen from him.
(Lesley rolls her eyes and goes on arguing patiently with him, knowing he’s never going to change. Her mother said to her once, “Do you think he was adopted?” “No,” said Lesley. “He looks like us.”)
Irony isn’t quite the word for the fact that whenever there’s a mass-shooting, gun sales spike, in anticipation of a federal crackdown that is unlikely ever to come.
It’s also ironic that gun control in the so-called Wild West was a great deal more draconian. The gunfight at the OK Corral happened basically because the Earp brothers were trying to disarm a group who were carrying firearms in defiance of a Tombstone city ordinance.
There’s probably a song somewhere in there just waiting to be written. With a nice mandolin accompaniment.