Francoise Hardy: the song she hated and her fans loved

When I was the Paris-based correspondent for The Daily Telegraph, I interviewed Françoise Hardy, whose 1962 single, Tous Les Garçons et Les Filles,  was a smash hit in France (15 weeks at No 1 in four separate runs between late October 1962 and mid-April 1963). I was among the adoring young men who helped it to the lofty heights of No 36 in the UK. But it is fair to say the song brought her international fame that belied that modest British chart achievements.

In that interview (from 2005 and reproduced below), Hardy told me in emphatic terms what she thought of the song. If decades younger, her judgement on it would have broken my heart. But whenever I have mentioned it since, my readers have tended to agree with her.  I still love it ... 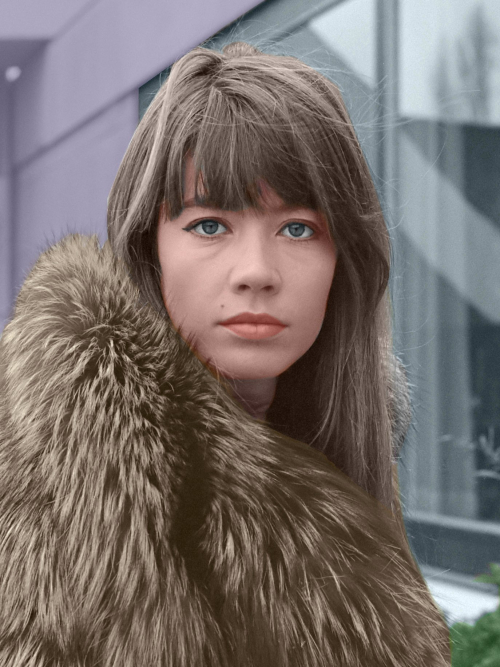 Françoise Hardy was the embodiment of the Sixties pop creation "Girl on Stool", the pretty, long-haired and slightly mysterious singer seated on a TV-prop perch and strumming a basic guitar accompaniment.

She was also, fleetingly, the voice of a generation. For fans in the English-speaking world, it helped to be doing French at school. Nothing too demanding, just enough to know what she meant when lamenting in seductive tones about all her contemporaries – Tous les Garçons et les filles de mon age – having boyfriends and girlfriends while she had no one.

Two million copies of the record were sold on either side of the Channel. When Hardy repeated the trick with the lost love simplicity of All Over the World, even the modest linguistic hurdle was removed. In French or in English, the sentiments spoke for anyone who felt tinges of discomfort in a swinging decade dominated by hordes of beautiful people.

Sullen teenagers could sing along morosely, somehow forgetting the striking looks and model-girl slimness that made Hardy far too gorgeous a creature to be sounding so sad and self-pitying in the first place.

At her convent school in provincial France, my wife identified with every word. So, reflecting on patchy successes with girls in small-town northern England, did I.

The magic lingers; a friend in Paris tells me she often hears 1960s Hardy, and probably that song, three times on Radio Nostalgie, the French golden oldies' station, during a two-hour drive back from the country each Sunday evening.

Yet, when you have to wait nearly 40 years to meet a woman you briefly worshipped, it is realistic to be prepared for disillusionment.

In Hardy's case, this has nothing to do with unkindnesses inflicted by advancing years. She complains of physical decline, of feeling "fragile" but does so while bounding around her spacious, split-level flat in Paris's 16th arrondissement not far from the Arc de Triomphe.

For a woman who will this month be 61 [NB: she is now, in April 2021, 77], she remains handsome, elegant and thoroughly Parisian, with meticulously coiffured hair, the familiar angular frame and not an ounce of fat.

But invited to wallow in pride at memories of those angst-ridden anthems of long ago, she produces the most disdainful of Gallic shrugs. "Tous les Garçons?" she exclaims in horror. "Tiny voice, trite little melody, inconsequential song. Of course, I am pleased with what it did for me, but I am not remotely proud of it." At least she approves of All Over the World: "Much better, much more interesting".

Hardy is much keener to talk about what she has done since and what she does now. That is hardly surprising since, give or take the occasional gap, she has enjoyed steady success, having recorded about 30 albums since 1962. Tant de belles Choses (So Many Beautiful Things), her first record of new songs for eight years, hit the French charts at number seven and has remained in the Top 40 ever since. It comes out in Britain later this month [NB: we're talking about 2005].

The songs, whether self-composed or borrowed from writers she admires, notably the Black Country songsmith Ben Christophers and Ireland's Perry Blake, haven't got much happier. But, though it takes a few listens, the impression ultimately is of an infectious collection of songs, exquisitely arranged and breathily delivered.

"I don't see myself as an especially sad person," says Hardy in her minimalist reception room where the only concession to extravagance is a giant Buddha gazing down from the wall. "When I write, it is always the melody that comes first, and it just happens to be the case that the most beautiful tunes are sad, and the lyrics follow the mood of the melody."

But, if writing melancholic verses is more functional than autobiographical, this was not always the case.

Almost reassuringly, Hardy was a genuinely lonely, unhappy young girl who took refuge from the withering disapproval of a ferocious grandmother, and from her own certainty that she was inadequate and unlovable, by listening incessantly to Radio Luxembourg. There she found a comforting diet of Anglo-American pop.

The inferiority complex began to fade as Hardy realised that she had something the music industry and public wanted: wistful, marketable songs and star quality. She found herself on the fringes of the yé-yé movement, in which singers added a peculiar Frenchness to mid-Atlantic pop. Like most French pop, it didn't export well, but Hardy had a folksy image that set her apart from the real yé-yé girls: France Gall, Sylvie Vartan and Sheila.

She had boyfriends by now, too. But it wasn't until Mick Jagger described her as his ideal woman that she thought of herself as attractive. Bob Dylan had shown interest, too, and honoured her in a poem scribbled on a record sleeve. He needn't have bothered.

"I had no interest in him as a man, only as an artist," she says. "He took me to his hotel room after inviting me to a show in Paris, and played me two tracks he hadn't yet released, I Want You and Just Like a Woman, but he wasn't a very attractive man, and didn't seem well in himself. Jagger was different. He is someone I could really have fallen for. Unfortunately, he was with Chrissie Shrimpton at the time."

Hardy was born in 1944 in a Paris still occupied by the Nazis. Her parents were separated, and she saw her father rarely. The notion of the absent male figure has pursued her into adulthood, so that her relationship with her husband, Jacques Dutronc, a charismatic pop singer turned actor, seems not so much turbulent as sporadic. He spends much more time than her at their Corsican retreat, and they seldom dine out à deux.

Just as she buried her adolescent insecurities in pop, she has found rewarding distraction as an adult in astrology, and devoted four years to the most exhaustive of her several books on the subject.

"It took too long," she says. "I really neglected my friends in that time. But it was an achievement and meant a huge amount to me. I never get bored. There isn't enough time in the day for me."

It is easy to see the study and the writing as one of the grand solutions Hardy favours in life. In 1968, she decided to give up live performance; she had no confidence in her voice. "If I could sing like Céline Dion, it would have been different," she says, without obvious regret.

The albums go on selling, the French remain utterly fascinated by her life and music, and Hardy - having already worked with Blur and Iggy Pop - remains enthused by the perpetual quest for new collaborators. She is especially pleased with one new musical partner, her son Thomas, who produced and played guitar on the new album.

Acquaintances with passing knowledge of Hardy say she is difficult, given to occasional control freakery. Just before I leave her apartment block, however, I catch glimpses of how easily the "difficult" temperament can be broken down.

Seeing my blank look when she gushes about covering the work of Christophers and Blake, she whisks me up in her internal lift to a small studio to play me examples of their work.

Before our meeting, her publicist had warned that Hardy gives interviews only in French. But the journalist who breezes in after me confesses in his first breath that he hasn't a word of the language of Molière, compliments Hardy on the Buddha and is instantly reassured, in perfectly competent English, that it'll be no problem at all.

The later Françoise,  from the album mentioned in the interview

* I was the Telegraph's Paris bureau chief from 2004-2006 before being made redundant. At the arts desk's request, I continued for a while to write music reviews as a freelance and had verbal consent to reproduce this kind of paid work at my websites.

The Hardy interview, however, appeared when I was a staff  employee and when payment was discussed, I declined. If that sounds foolish or excessively noble, my reasoning was sound. I was on a good salary and saw writing occasional features about France as part of my role. whatever the subject.

Never a fan of her music, early or late. That hasn't changed.

Francoise Hardy has never realised how important her Disque Vogue recordings were between 1962 - 1972. Every song was fresh and original and absolutely haunting and charming.

I was an undergraduate at Lancaster in 1980 and was luck to find a copy of the Marble Arch Francoise Hardy Sings About Love on Morecambe Market one Sat. morning. The man who sold it to me said categorically that I would really like the album and he was 100% right - on hearing the album I was hooked. The next album I quickly acquired was the Pye 1974 compilation Golden Hour of Francoise Hardy - 23 tracks which just illuminated my life. I think her musical legacy - c,est tres important - c,est magnifique!
Philip Hugh Price