Music of the West Country: (1) We are Family - clan Lakeman and sounds from Dartmoor, Derry and Barnsley

Crossing England diagonally as far as can be travelled on land from the North East takes us to the West Country, the setting for my second series on regional folk and related music.

Music from North Eastern England - see it here - was an easy choice for the first since it is where I grew up, spending 23 of the first 23-and-a-quarter years of my life in County Durham. My parents, both Londoners though my mother had strong links to the North East, moved us up there when I was a Sussex-born baby.

I know less about the West Country and its music, but I do know a little.

From 1977 to 1985, I lived in Bristol and covered the whole of South West England, plus South Wales, for The Daily Telegraph, then a newspaper. The first of my daughters was born in Bristol, both started school there.

Bristol is a city I love and the greater region, stretching for my reporting duties from Gloucestershire and Wiltshire down through Somerset, Dorset and Devon to Cornwall, is generously endowed with natural beauty. My wife's relatives and friends would visit fairly regularly from France and it was a happy period of our lives.

Live music played its part in that happiness, from folk clubs or concerts in Bristol and Chipping Sodbury to the Cheddar folk festival, sessions in Devon and Cornwall and more besides.

In this first edition of a new series, Music of the West Country, we shall look at and listen to assorted members of the extended Lakeman family.

Among others I hope to feature in one or more further instalments will be Show of Hands, the Yetties and three singers now deceased, Cyril Tawney, Brenda Wootton and Fred Wedlock.

There should be room for others such as Ian Anderson (the blues musician and fRoots founding editor, not Jethro Tull's frontman) and Chis Newman. The problem, given the huge geographical area concerned and how many fine musicians and singers it produced, may be how to fit in everyone from it who has made a mark. 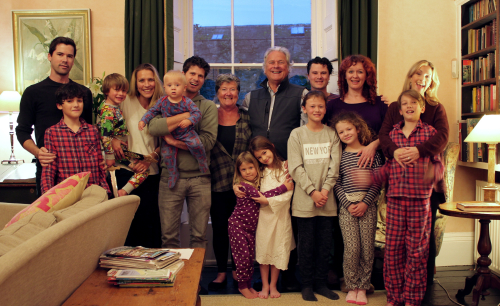 Geoff Lakeman and I go back 48 years as I explained on these pages when I reviewed After All These Years, the solo album he waited until he was 69 to record. Our paths have crossed in both music and journalism; he claims the credit for guiding me into Fleet Street and the media outlets that employed me there (my Telegraph years followed a stint at the Press Association, and Geoff had preceded me at both places).

In that Salut! Live article from 2017, the same year the fabulous family photo above was taken, I may have got a little carried away when recalling our enduring friendship ("well that's my obit done," Geoff said later).

The album is outstanding. The Somerset-based songwriter Reg Meuross, a product of Stockton-on-Tees so straddling both regions so far discussed here, called it "proper living, breathing, strong heart beating folk music". A respected Canadian music critic, John Sakamoto, introduced to Salut! Live by a mutual friend, Bill Taylor, chanced upon my piece and exclaimed: “Geoff Lakeman! That is fantastic.”

As many readers will know, Geoff turned his lifelong love of music into a second career after retiring from newspapers, his pension having survived the Maxwell scandal.

A native of Cornwall, long-time inhabitant of Devon, he trundles around the country and beyond - or did pre-Covid - with his concertina, charming audiences with his songs, tunes and a top journalist's gift for storytelling.

His is a remarkably gifted family. Geoff's wife, Joy, plays fiddle, was a teacher and served as a magistrate. All three sons, who I first encountered as little boys when my children were still little girls, have done outstandingly well in music, winning significant change national and international recognition.

Seth, the youngest, has played to 45,000 people in Hyde Park, and his brothers perform in exceptional duos with their wives, Sean with Kathryn Roberts and Sam with Cara Dillon. All three sons, plus Kathryn, Cara and Kathryn's friend from Barnsley Kate Rusby, were members of Equation. 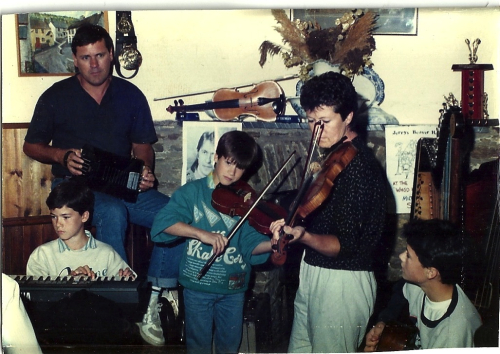 The Lakeman Family Band at the Who'd Have Thought It? folk club, Milton Coombe around 1990

On to the music and let's hear first from Geoff.

From that belated debut solo album, I have chosen a song written by Reg Meuross, mentioned above. England Green, England Grey tackles all manner of injustice inflicted on ordinary people, at home and overseas.

One line - "The NHS our England’s jewel is bartered by Westminster’s fool" - neatly sums up our hideous Brexit Government's treatment of the service and its staff . It was, of course, written before Boris's proposed reward for "our amazing" nurses ("we owe you more than words can say", "today's Nightingales"), was fixed at a one per cent rise in salaries, in other words a pay cut.

There'll be a u-turn, of course, but one that is being forced on him by an aghast public. One per cent remains the increase he and his ministers repeatedly and robustly defended. The clip is from the Barnfield Theatre in Exeter three years ago and showcases Geoff's easy, warm way with audiences:

Seth Lakeman won two BBC Radio 2 Folk Awards in 2007 (best album, Freedom Fields, and singer of the year) and is a past Mercury awards nominee.

He has toured as support to Jools Holland, the Levellers and Billy Bragg and as an accompanying musician with Robert Plant. Along the way, six top 40 albums, one reaching No 8. Folk superstar does not seem too exaggerated a description.

Seth has consequently played to far bigger crowds than the animated bunch of spectators who gathered around the public piano at St Pancras station in London to watch him play, with fiddle, Kitty Jay, the title track of his 2004 album, produced by Sean and achieving silver status. I happen to love that venue, if venue it can be termed and this must have been marvellous to be there at that moment in 2011.

Seth's wife is Hannah Edwards, a nurse (it is not recorded whether she is currently clapping hands for Boris and Matt). At their wedding in Withiel, near Wadebridge, her grandfather, a Cornish bard, read a blessing in Cornish.

Sean and Kathryn, also BBC Folk Awards winners (best duo, twice and Kathryn once) are a joy to hear.

La Moneca (Queen of the Island of Dolls) tackles less joyful subject matter. It was inspired by the true story of Don Julián Santana Barrera, caretaker of the Islas de las Munecas, south of Mexico City, who began hanging dolls from trees to appease the spirit of a young girl he had found drowned in the 1950s.

The song, their own composition, appeared on the album, Tomorrow Will Follow Today. It is a magical, haunting piece that highlights the couple's lyrical and musical powers.

Sam and Cara , also lappers-up of awards, have managed to keep busy in lockdown.

I wrote about their imaginative idea at an earlier stage of the crisis, last August, of staging a concert that was live and professional in every sense bar the absence of an audience (A Ghostly Lockdown Treat).

Cara, cruelly unable to travel back to see her family in Ireland for more than a year, has established virtual contact with home with a series of six one-hour programmes for BBC Radio Ulster, Women's World, choosing an eclectic range of music from female artists. Sam produced it at their studio in Frome, Somerset.

* Read more of Geoff's coupling of journalism and music here and here. Of post-pandemic plans, this is what he tells me: 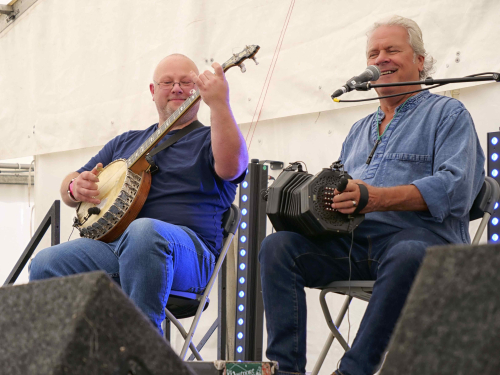 My new duo - which had only done about a dozen very well-received gigs - was locked down and I have only played four times with Rob Murch in the last year. We will meet this week- our first live gig will be at Dartington, Totnes, on May 20 - the first of their summer "lawn sessions".

We did get to Minack Theatre near Land 's End in September when I appeared with Seth at outdoor concerts.

We have twice had our booking for Costa del Folk in Ibiza cancelled. But the organisers have put together a great festival (As You Like in Stratford on Avon, using the artists who would have appeared in Spain, at the end of July. I am still patron of Cornwall Folk Festival, which IS going ahead.

One gig Rob and I are crossing our fingers for is a five-day musical cruise down the Rhone in September. We are booked as a duo - and Joy gets to go too - and will visit a different vineyard every day, then drinking the wines while performing/listening/jamming with Show of Hands and others in the evenings and drifting down the river. Let's hope that can happen.

Joy retired after 17 years as a magistrate at the beginning of lockdown. Just as well because courts have not sat since. She didn't fancy sitting in on " zoom" courts, which are not working well at all.  Joy spent the last few years specialising as a Family Court judge, which was challenging.But she'd rather concentrate now on her grand children - three sets of twins, four teenagers.

Joy and I celebrate 50 years of marriage in August, If festivals go ahead, the family could be all over the place doing gigs. Otherwise we'll all congregate in Seth's two-and-a-half acre grounds on the edge of Dartmoor for a family hootenanny.

Love everything about Seth Lakeman and "Kitty Jay" - the song, the singing, the fiddling, the setting. St. Pancras ~ very cool.

Quite right, Natalie. Apologies to all. Now corrected