Home Archives Profile Subscribe
In honour of Vin Garbutt, in support of a venue he loved
Lily Langtry: candlelit campfire folk and a small-town trio better than the New Christy Minstrels

Maddy Prior, Steeleye Span and variable winds for Sails of Silver

Maddy Prior entered my life in the downstairs snug of the Golden Cock pub in Darlington, County Durham. The earth may not have moved but it was a brief pleasure and its memory, if doubtless long forgotten by her, remains fixed in my thoughts.

She was touring the folk clubs with Tim Hart. I was an hour or so early for that Tuesday's session of the Folk Workshop and took my pint into the small room down the corridor from the main bar where I found Maddy sitting alone, reading a book.

These were the Dark Ages. Tim was in the bar, a male preserve to which women were denied admission,  and the same memory - shakier on this detail - tells me he was playing darts.

When the time came and they were able to rejoin each other in the same establishment, Tim Hart and Maddy Prior gave a couple of captivating sets. I am not sure whether exciting plans for forming Steeleye Span were already on their minds. They were a duo from 1966 but even if I cannot recall its date or even year, the Darlo gig was much closer to Steeleye's launch in 1969. 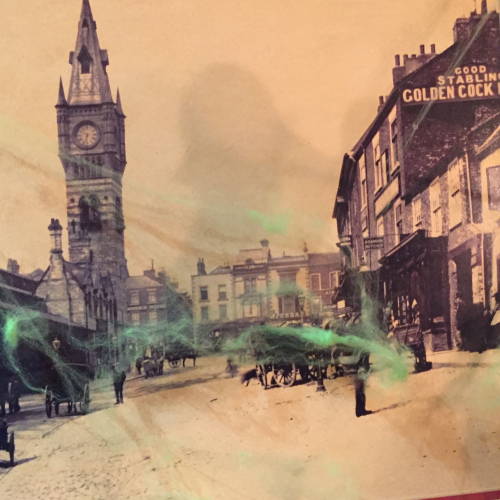 I remember that gig...I was stunned that I wasn't allowed in the bar. I was used to being disapproved of...but not banned. It was a sing-a-round, as I remember?

What happened next stands as one of the musical highlights of my life.

I have a dim recollection of browsing in the record shop at Cecil Sharp House, headquarters of the English Folk Dance and Song Society, and either hearing the staff play Steeleye's dramatically innovative album Please to See the King or just coming across the LP and buying it. That would take us to no earlier than March 1971 - crikey, 50 years ago this month - and it was only later that I heard and bought the debut album, Hark! The Village Wait, on which the short-lived band members Terry and Gay Woods had appeared.

But whenever it was that I became aware of Steeleye, they were to become a lifelong fixture.

Electric English folk, not folk-rock, I remember them insisting though most of us would still apply the latter definition. The sounds grew better and better and most of us had little problem with the stabs at chart success - Gaudete and All Around My Hat - or the novelty pieces like To Know Him Is To Love Him (with David Bowie on sax) or the a cappella Rave On.

Along the way there has been a stream of great albums and superb gigs, retirements and comebacks, Maddy dancing around the aisles of concert halls during the reels and jigs, money floating down from the ceiling in Hammersmith as a gift to everyone (I'll say no more) ... and Sails of Silver.

Which brings me (finally) to the reason I decided to write about Maddy again.

There is a lively Steeleye Span Facebook group where recently members have been discussing the merits or otherwise of that 1980 album, which marked a departure from the customary Span diet of traditional material and also the return of Peter Knight and Bob Johnson to a reformed band two years after it had broken up. It was a controversial piece of work and many fans were bitterly disappointed.

Writing 41 years later, Paul Osborne began his Facebook thread: "Being new to Steeleye Span I’m currently going through all the albums chronologically. Up to now, every album has been great. Today I listened to Sails of Silver and have to admit that my heart sank."

The comment drew a lot of responses, from the view it was their "weakest album" to praise for individual songs, such as the combination of Marigold and Harvest Home, and even for the whole record.

I also remember being unimpressed on first encounter but did not begrudge the band its search for a more commercial sound.  "I remember friends of mine, aware of the band but not really folkies, liking it because it was a departure," I posted at Paul's thread.

Wikipedia's notes quote Maddy herself as having mixed feelings. But the reference is slightly misleading since the comment it cites, without attribution but from a folk writer who signs himself "Nerd" at the Mudcat folk message board and is really Stephen D Winick, reads more fully: "Because we'd all kind of gone in different directions, all doing different things, with different ideas, that certainty that we'd had before, we'd lost.

"We were so in disarray, and we didn't have the material we were confident with. So [producer Gus Dudgeon] had a lot more input, and I think that's why it sounds very sweet and rounded and nothing offensive in it, you know.

Still, Winick adds, she insisted it was not a bad album. "I actually think it's quite a jolly album. And very accessible."

But not to many. Sails of Silver - "surprisingly well-crafted yet largely overlooked" (Dave Sleger at allmusic.com), "unfamiliar material and slick production values contributing to the feeling this is not a Steeleye album at all" (Stephen Winick) - was not a commercial success.

At the same Facebook group mentioned above, a follow-up post from Derek Beauchamp linked to the full album and attracted a shorter but wholly positive feedback. 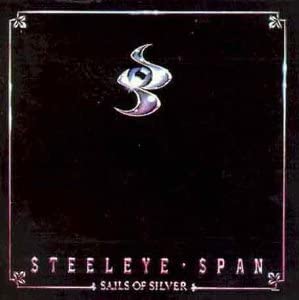 You can buy the album at the Salut! Live Amazon link from this caption

In time, my own assessment became one of qualified approval.

This merges parts of my Facebook replies to Paul Osborne: "I also had doubts at the time of its release but seeing them live and performing its content eased those doubts. And I do think there is some really good material on the album. But still not a patch on classic Steeleye ... At the time I thought, ‘OK, as long as they don’t make a habit of it."

Paul himself also had second thoughts, returning to the group to say: "In my last post I was critical of Sails of Silver. To be honest it has grown on me and there are some highlights on the album. I was hasty in my reaction."

IM SORRY.... but without the amazing &English Pentangle and Steeleye span our Scottish songs might have been lost to us. Cultural Union with Eng will exist beyond a daft Political archaic mess, good England will wish us the best because they love us. https://t.co/5zpwvFgPKp

Overall then, a useful if not exceptional addition to the repertoire of a band that played an important part the way folk music was played and in making it, if not exactly cool, OK for non-folkies to enjoy. And I still treasure those memories of seeing Tim (who died aged 61 in 2009) and Maddy at the Golden Cock. 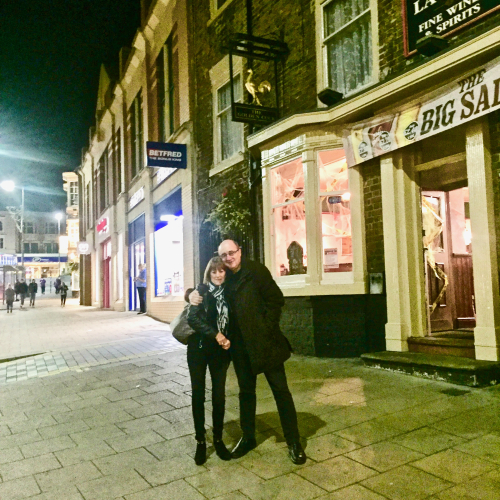 My wife, Joelle, and I outside the Golden Cock in 2016. We met there in 1970 when she was an au pair girl newly arrived from France

Great picture of you and Joelle. For my money, Maddy Prior did absolutely the best version of Pirate Jenny (The Black Freighter) from Brecht’s Threepenny Opera. That gleefully soaring voice makes the already sinister lyrics doubly so.

A lesser song but still delightful is Senior Service: “Sally’s in the alley and Nancy’s on the game...” Hard to imagine anyone but Steeleye and Maddy Prior pulling it off with the necessary insouciance.

I have the LP. I remember it puzzled me too in parts. But I think it's very enjoyable.

I always have a soft spot for 'Senior Service' but only the live version (from 1981 Cambridge Folk Festival) as it demonstrates just how much better these songs were without the (in my view) dodgy production. This version is incredible! https://www.youtube.com/watch?v=vEyzhL_ii-c ... And also a rare track as an original written by Maddy. Not many of those , her writings were mainly for solo songs

In my opinion, it was Steeleye’s remarkable ‘take’ on Trad music that made them unique, not the songs themselves. We knew the songs already. Same with Fairports and Pentangle. The creative juices of those young people just flowed and gave us contemporary music!

To my surprise and delight Maddy saw my tweets about this piece and responded, recalling her shock at encountering such sexism. I replied with the story of my wife, Joelle, young and full of French republican spirit, demanding the right to go to the bar at Old Shildon Working Men's Club and ordering drinks. This was also banned and my dad, the club secretary, warned that I'd be "put on a charge" of she did. Even that was sexist - why me and not her? Probably because she was a 'guest' not a member.

Personally I Love Steeleyes Sails of Silver album, it was the very album that as a child got me hooked on the band, a good middle point to look at the bands history.
Maddys vocals on that album i think were at her Peak, Gone to America is stunning but rarely mentioned.

I’m with you on that song, Stephen. It seems to be the sort of album established fans disapproved of but gradually came to like

I remember seeing Steel Eye Span when they were touring in Australia. It would have been around 1980, and Sails of Silver had just been released. We were seated near the front of Dallas Brooks Hall in Melbourne, and Maddy was dancing on a section of stage right in front of us. Wonderful!